A native of Bettendorf, Iowa, Toporowski hails from a hockey family and most recently played with the Spokane Chiefs of the Western Hockey League.   He will continue to work as an area scout for his former team. 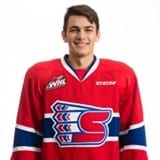 “Jake will be a huge asset to our program,” said Storm head coach Dave Pszenyczny. “An extra set of eyes with his experience is invaluable and it will be great to have another individual to assist in the responsibilities that come with coaching and managing a roster.”

Toporowski is excited for his first chance to coach professional hockey.  “When approached about the opportunity I was ecstatic about the thought of working in the rink I learned to skate in while being able to gain experience coaching at the pro level for the first time,” said Toporowski,  “I look forward to meeting the guys in a few weeks and working alongside Dave to put a winning product on the ice.”

Toporowski is the son of former Quad City Mallard Kerry Toporowski who played with the team in the UHL for six seasons.

Opening night is October 25th when the Storm faceoff against the defending league champion Huntsville Havoc!  Get to your seats early for a laser light show, drumlines and $2 beers and hot dogs until the puck drops!