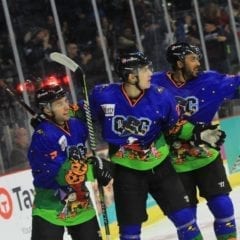 Coming off a weekend sweep of the Vermilion County Bobcats the Storm returns to actionon home ice Thursday and Friday to battle the Peoria Rivermen.Thursday is the Storm’s first ever School Day Game. More than 3000 kids from across the QCA will bebussing to Vibrant Arena and cheering on the Storm. Puck drop is 10:30 AM. During the gameeducational videos featuring Storm players will run on the video board and all students will receive a baglunch. Friday is Nickelodeon Night featuring Baby Shark! Specialty Baby Shark jerseys will be worn during thegame and auctioned online and Baby Shark music... Read More 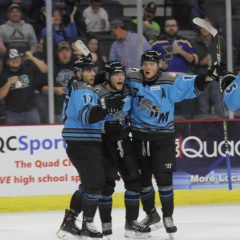 The Storm return to the ice TONIGHT, Friday January 13th, for Youth Sports Night presented by Orthopaedic Specialists! The first 1000 kids in the building get a free youth jersey. Puck drop is at 7:10 PM and tickets can be purchased at QuadCityStorm.com, TIcketMaster.com and the Vibrant Arena Box Office.  Read More 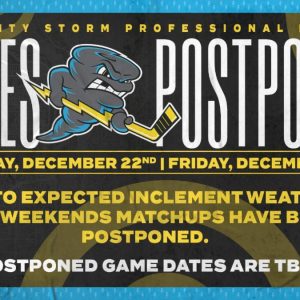 The SPHL has mandated the postponement of the Quad City Storm home games versus the Vermilion County Bobcats on Thursday December 22 and Friday December 23 due to unsafe travel conditions. The games will be rescheduled to a future date TBD.  All tickets purchased for this weekend’s games will be honored on the rescheduled game dates. “We are incredibly disappointed for our players and fans,” said Storm President Brian Rothenberger.  “Our team was incredibly hungry to get on the ice this weekend and head into holiday break with four points and I know Radar’s birthday and seeing Santa... Read More 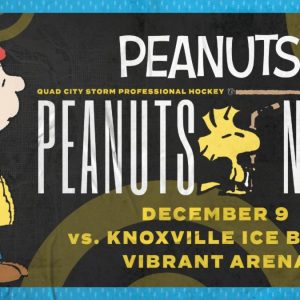 This Friday the Quad City Storm are back at Vibrant Arena at the Mark for Peanuts Night presented by Machinist Union Lodge 6 and Local Lodges 388 and 1191. The first 1000 fans receive thunder sticks and the Storm will be wearing Peanuts themed jerseys featuring Snoopy and Woodstock. Funds raised from the jersey auction will be donated to Guide Dogs of America & Tender Loving Canines. Puck drop is 7 p.m. Fans can get tickets for this weekend’s games at QuadCityStorm.com and the Vibrant Arena box office.  Read More

The Quad City Storm (9-6-0) returns to action Friday & Saturday for a pair of home gamesversus the Knoxville Ice Bears (8-5-2).Over the weekend the Storm split decisions with the first place Evansville Thunderbolts. Friday theStorm won 4-0, led by netminder Bailey Brkin who recorded a 31 save shutout. The Storm fell Saturdaynight by a final score of 3-0.This Friday the Storm are back at Vibrant Arena at the Mark for Peanuts Night presented by MachinistUnion Lodge 6 and Local Lodges 388 and 1191. The first 1000 fans receive thunder sticks and the Stormwill be wearing Peanuts themed jerseys featuring... Read More 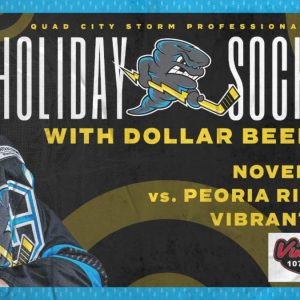 Are you ready to sock it to the ice in Moline, Storm fans? Quad City Storm is holding dollar beer night and sock chuck night at 7:10 p.m. Saturday night at the Vibrant Arena, 1401 River Drive, Moline. Fans are encouraged to bring new-packaged socks and underwear to throw on the ice when the Storm score its first goal! All items will be collected and donated to local non-profits and shelters that support the homeless in our community.  Read More

The Quad City Storm returns to Vibrant Arena for a Thursday-Friday set versus the Vermillion County Bobcats. After a weekend split with the Peoria Rivermen the Storm enters Thursday nights game in first place atop the SPHL with 10 points and a record of 5-2. Thursday night is Hocktoberfest presented by Palmer College of Chiropractic. All fans 21+ can enjoy free beer samples pregame and puck drop is at 6:10 PM. Friday the Storm honors active duty service members and veterans with Salute to Military Night presented by QCA Pools and Spas. Special Military Night jerseys will be worn in-game and auctioned... Read More The Quad City Storm hosts its fourth annual Salute to Military Ice Painting presented by QCA Pools and Spas Monday November 7th from 9AM-7PM. Quad Citizens are invited to Vibrant Arena at the MARK to paint the names of loved ones who serve or have served in the United States Armed Forces on the ice. The names will remain on the ice for the games next Thursday and Friday. The event is free and open to the public. Paint and brushes will be supplied by the Storm and Mission BBQ will be onsite providing free dessert for all participants. The Storm returns to Vibrant arena this weekend for a pair... Read More

Quad City Storm Move Into First Place, Ready For Day Of The Dead Night This Weekend 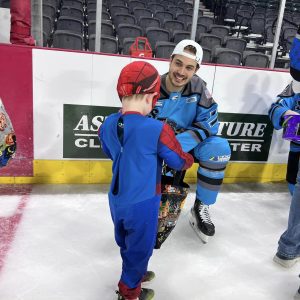 The Quad City Storm secured four of six possible points over the weekend and now holds sole possession of first place in the SPHL for the first time in franchise history. Friday the Storm notched its first road victory of the season with a 5-1 defeat of the Vermillion County Bobcats. Five different Storm players tallied goals in the effort and netminder Kevin Resop stopped 29 of the 30 shots he faced. Sunday the team returned to the Quad Cities and put together an 8-4 win over the Evansville Thunderbolts. Forwards Mike Moran and Cole Golka led the way with a pair of goals and an assist each... Read More

Tagged: day of the dead nightQuad City Stormquad city storm in first placevibrant arena at the mark
Page 1 of 121234
Next Entries ›
Last »