BREAKING: Covid Numbers Rampaging Across Illinois, Will There Be More Shutdowns?

Thursday, Illinois reported its single-highest daily total of new COVID cases since late May, with 6,636 new probable and confirmed cases. In addition, people are testing positive for longer periods of time, and are becoming infected again after infections much more quickly.

“I wouldn’t say the incubation period is shorter… it’s been getting shorter compared to what the original was, but we are seeing people often have just upper respiratory symptoms or having a cold, they’re having sore throat sometimes, they’re having fever or not seeing a lot of that severe illness – especially in people who are up to date with vaccine because the secondary part of your immune system kicks in and helps – but we’re seeing people…they can stay positive for a little longer,” Chicago Department of Public Health Commissioner Dr. Allison Arwady said this week. 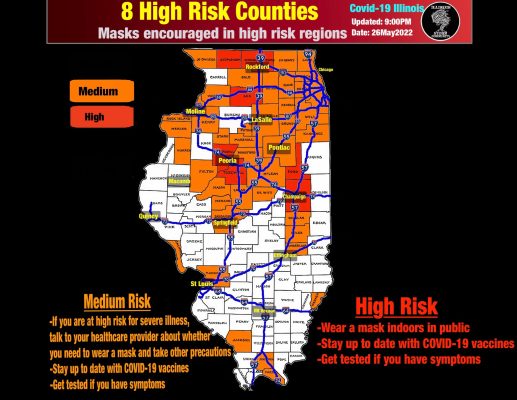 Illinois covid rates began to rise in May, and have continued to dangerously grow through the summer.

Centers for Disease Control and Prevention guidance on quarantine and isolation has remained unchanged since March, however, there have been calls for increased mitigations and a return to a mask mandate.

Some Quad-Cities restaurants and businesses have been impacted, having to initiate short-term shutdowns due to covid outbreaks within their workers. Rock Island’s Circa ’21 just announced they’ll have to cancel this weekend’s opening weekend of the new show “Disaster!” due to four cast member testing positive for covid.

As a new, more contagious omicron subvariant continues to spread in the United States, some residents are nervous and calling for mitigations to return.

According to the latest “Nowcast’ released by the CDC on Tuesday, the BA.5 omicron subvariant is now estimated to be responsible for 77.9% of COVID cases in the United States.

As of now, Illinois side schools have yet to announce any mitigations or prevention measures for when schools return their students on Aug. 2.

QuadCities.com will continue to monitor this situation and provide timely, fact-based coverage.