And The REAL Winner Of The Iowa Caucuses Is… 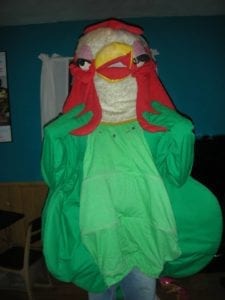 You could tell there was something afowl in Iowa for a while.

The scent of something bold, spicy, hot, was in the air.

It was an original recipe for chaos that turned extra crispy as the night dragged on.

And so it’s no surprise, that we at QuadCities.com have unplucked a savory scoop.

And when the national media gazes a popeye on it, they’ll be fileting those who have tried to cover it up, probably in panko.

What have they been covering?

That the REAL winner of the Iowa caucuses is …

That half-chicken, half-dinosaur bird of ill repute best known for its starring performances in sketch comedies and films throughout the Quad-Cities in the 2000s, as well as its debauched and hellraising behavior following its rocket to stardom.

Iowa, gaze upon the plate of victory, for it is a delicious irony.

Now, some might say, “Well, wait a minute, I didn’t even know Chickenzilla was running for president, let alone as a Democrat!”

To those, we have three very important words:

Oh, no, wait wait wait, those aren’t the words; those are for Illinois voters. Here are the three words for Iowa:

Yep, that’s what’s been keeping the results delayed for so long. They’ve been in shock since last night, when people began showing up saying they were caucusing for Chickenzilla as a write-in candidate.

At first, precinct captains thought they might be drunk.

And, well, some were.

Ok, almost all of them were.

But that didn’t stop them from standing by their dinofowl and letting their clucks be heard. And, over the cries for Bernie, Pete, Warren, Biden and others, those clucks were heard, and soon, the Chickenzilla Army were crowing.

Precinct volunteers weren’t ready for such an uprising. So, they’ve been scrambling to get the numbers right, needing to check all of the ballots, to make sure that indeed, Chickenzilla is the winner of the Iowa caucuses.

The word has flown down from the henhouse early today that indeed, Chickenzilla was the surprise winner. Now, it just needs to be officially announced by the media, which, let’s face it, will probably cover it up. Probably with flour, egg whites and a secret blend of spices.

Why would Chickenzilla emerge from its apparent life of luxury on a beach, getting tanned and fit, to battle for the Democratic primary?

It’s all part of an old grudge.

One which cannot be unanswered.

One which must be met.

Between a long lineage of chickens…

…and a long line of white-haired men, named Sanders.

Chickenzilla vs. Sanders. A battle that’s going to get extra spicy.

You know there’s more than a Colonel of truth to this.