QuadCities.com proudly presents Fun10, a list of the top 10 things to do in the Quad Cities this week, and every week! Every Sunday, we’ll drop a new FUN10, to give you a head start on your week and a heads up on what’s going on over the coming seven days. Check out FUN10 every Sunday for the details on ten awesome events happening around town. It’s a cool read, and a great way to get started planning your entertainment for the week. 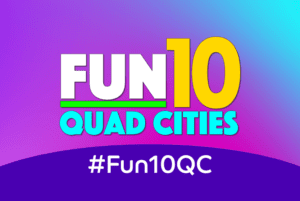 Due to the cancellation of so many regularly scheduled events in the Quad Cities – with more coming in every hour – we’re focusing this week’s edition of Fun10QC on fun entertainment you can enjoy in the safety of your own home or while practicing safe ‘social distancing’.

Country Music’s Party of the Year might be postponed until Wednesday, Sept. 16, but the artists didn’t want fans to go without all the performances and emotional moments that typically make up the Academy of Country Music Awards.

Instead of the ceremony proper, on Sunday, Apr. 5 at 8/7c on CBS and CBS All Access, the biggest stars in country music will be practicing social distancing and staying home, but also invite fans to join them for ACM Presents: Our Country, a new kind of entertainment special.

ACM Presents: Our Country will feature intimate conversations and at-home acoustic performances with top artists, along with clips of their favorite moments from the Academy of Country Music Awards’ 55-year history.

Stars will appear from their homes via video chat to share heartfelt thoughts and perform acoustic versions of country hits.

Additionally, video clips from previous ACM Award® broadcasts will allow viewers to reminisce with them about their favorite ACM moments. It will be a night filled with entertainment, hope, and reflection, bringing the healing power of music to Americans at a time when they need it most.
Finally, beloved country-music radio personality Bobby Bones make an appearance to introduce the ACM Lifting Lives® COVID-19 Response Fund.

Fans can expect to see their favorite stars turn out intimate renditions of their biggest hits, like:

To make an emotional night even more touching, Luke Bryan, Brad Paisley, and Darius Rucker will honor the late, great 10-time ACM Award-winner Kenny Rogers with a loving tribute: Bryan will perform “Coward Of The County,” while Paisley and Rucker team up for “Lucille” and “The Gambler.”

Join Daina Lewis as she kicks off SHINE yoga & bodyworks’ first ZOOM LIVE class for the Shine Community! This class is for all levels and you are encouraged to move at your own pace and listen to your body.

Please be sure your email is in the Mindbody system when you sign up for the class.
SHINE will send you an invite to the Zoom link for class once payment is made. Be sure to download the Zoom app on your device.

You can use your pass, pay a ZOOM $8 drop in or purchase a ZOOM unlimited yoga pass thru Mindbody.

Registration will close 1 hour before class begins to ensure links are sent out to all students.
Invite others to join in the fun while we are all cooped up at home!

Broadway.com is honored to announce a livestreamed reading of Terrence McNally’s 1991 play Lips Together, Teeth Apart. The event, benefiting Broadway Cares/Equity Fights AIDS’ COVID-19 Emergency Assistance Fund, will appear on Broadway.com and Broadway.com’s Facebook and YouTube channels on April 6 at 7 p.m. The reading will be dedicated to McNally, who passed away from coronavirus complications on March 24. The event will be produced by Broadway.com with Eric Kuhn and Justin Mikita and directed by Trip Cullman.

The performance will star Jesse Tyler Ferguson as Sam Truman, Celia Keenan-Bolger as Sally Truman, Zachary Quinto as John Haddock and Ari Graynor as Chloe Haddock. The play chronicles two straight couples visiting the Fire Island home of a relative who recently died of AIDS during the height of the pandemic.

Tray (Tracy Morgan) is an ex-con who is shocked to see just how much the world has changed when he is released from prison for good behavior after a 15-year stint. Returning to his newly gentrified Brooklyn neighborhood, he discovers that his former girlfriend, Shay (Tiffany Haddish), has married an affable, successful white man (Ryan Gaul) who is helping raise the twins (Taylor Mosby and Dante Hoagland) Tray never knew existed. Wanting nothing more than to connect with his kids, but having neither the money to support them nor himself, Tray falls back on the skills he learned in prison to make ends meet while treading unfamiliar territory.

Ms. ShoShanna has missed reading to everyone these past few weeks! So, the Silvis Public Library has decided to host a Facebook Live Watch Party Storytime every Thursday in April and May at 6 p.m. with Ms. ShoShanna, herself!

Join in live to listen to some stories. Only a few videos will be left up to watch later for a short time due to copyright guidelines.

DreamWorks’ Trolls World Tour, which was originally set to open in theaters on Apr 10, will now be released digitally on the same day!

Trolls World Tour will be available to rent on all major entertainment sites, including Prime Video, Apple TV, xfinity, Vudu, Google Play, Fandango NOW and YouTube. You can pre-order now at https://www.universalpictures.com/movies/trolls-world-tour/watch-now.

Anna Kendrick and Justin Timberlake return in an all-star sequel to DreamWorks Animation’s 2016 musical hit: Trolls World Tour. In an adventure that will take them well beyond what they’ve known before, Poppy (Kendrick) and Branch (Timberlake) discover that they are but one of six different Troll tribes scattered over six different lands and devoted to six different kinds of music: Funk, Country, Techno, Classical, Pop and Rock. Their world is about to get a lot bigger and a whole lot louder.

A member of hard-rock royalty, Queen Barb (Rachel Bloom), aided by her father King Thrash (Ozzy Osbourne), wants to destroy all other kinds of music to let rock reign supreme. With the fate of the world at stake, Poppy and Branch, along with their friends — Biggie (James Corden), Chenille (Caroline Hjelt), Satin (Aino Jawo), Cooper (Ron Funches) and Guy Diamond (Kunal Nayyar) — set out to visit all the other lands to unify the Trolls in harmony against Barb, who’s looking to upstage them all.

Cast as members of the different musical tribes is one the largest, and most acclaimed, groups of musical talent ever assembled for an animated film. From the land of Funk are Mary J. Blige, George Clinton and Anderson. Paak. Representing Country is Kelly Clarkson as Delta Dawn, with Sam Rockwell as Hickory and Flula Borg as Dickory. J Balvin brings Reggaeton, while Ester Dean adds to the Pop tribe. Anthony Ramos brings the beat in Techno and Jamie Dornan covers smooth jazz. World-renowned conductor and violinist Gustavo Dudamel appears as Trollzart and Charlyne Yi as Pennywhistle from the land of Classical. And Kenan Thompson raps as a hip-hop newborn Troll named Tiny Diamond.

Trolls World Tour is directed by Walt Dohrn, who served as co-director on Trolls, and is produced by returning producer Gina Shay. The film is co-directed by David P. Smith and co-produced by Kelly Cooney Cilella, both of whom worked on the first Trolls. Trolls World Tour will also feature original music by Justin Timberlake, who earned an Oscar® nomination for his song for 2016’s Trolls, “Can’t Stop the Feeling!,” and a score by Theodore Shapiro (2016’s Ghostbusters, The Devil Wears Prada).

Looking for some quarantine fun? How about some Rock Star Bingo?!

Think & Drink Entertainment is providing fun-filled evenings for all-ages, with their “Quarantine: Rock Star Bingo” on Facebook Live every Friday night at 7 p.m.

Send a Facebook message to Think & Drink Entertainment during the day on Friday(s) and they will get your cards to you. Get a group of friends together or make some new ones!

This event is being provided for free. However, tips are greatly appreciated and can be send via Venmo @Think-And-Drink-1.

Coachella: 20 Years in the Desert

Although Coachella 2020 has been postponed due to current events, music fans can still experience the festival through the documentary “Coachella: 20 Years in the Desert,” which gives viewers an inside look at Coachella and explores its two decades of history.

YouTube Originals and Coachella have partnered to create a feature-length documentary “Coachella: 20 Years in the Desert.” The documentary will premiere on Friday Apr 10. You can watch the trailer now on YouTube.

Do you miss the carefree days of browsing and shopping for the latest local crafts and goodies? Well, luckily The Market: A Journey to Joy misses us too!

Go on a journey, from the comfort of home, and see what the 40 makers, crafters and curators have to offer this Spring. Enjoy a 1,500 sq ft clothing boutique, great home décor, bath and body care, specialty pet section, kids items, jewelry, snacks, treats and so much more!

All items will be available for shipping, doorstep delivery in the metro QC or scheduled curbside pickup!
Visit The Market: A Journey to Joy on Facebook today for updates and more information!

In a time of isolation and uncertainty, music can be both universal and unifying. Human To Human, a Facebook Live Benefit Event, will take place on Saturday, Apr 11 from 11 a.m. – 11 p.m.

Using Facebook’s Live Donate feature, Human to Human is asking for donations (only if you have the ability to during this time) benefitting Plus 1 COVID-19 Relief Fund working in conjunction with MusiCares and Sweet Relief Musicians Fund. Viewers can also contribute by texting PLUS1H2H to 50155 to donate.

Enjoy some live music from the comfort at home, while supporting those in the music industry who are struggling to make ends meet during this time. Funds raised will go toward medical expenses, food and other vital living expenses to those in the entertainment industry who have been impacted due to sickness or loss of work.