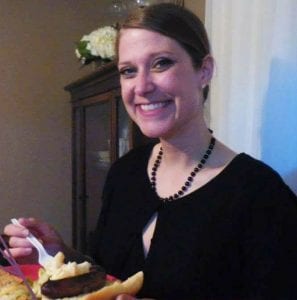 MACOMB, IL – A Western Illinois University graduate student recently used her internship in the Department of Sociology’s graduate program to increase awareness of the Salvation Army office in Galesburg, IL.

Jackie Smith, of Galesburg, recently completed her graduate degree in sociology. She had previously completed the necessary coursework, but had not finished her exit option, which could be an internship and professional paper, in place of a thesis.

Smith had completed two bachelor’s degrees at WIU, in theatre and anthropology, which were completed in 2010 and 2011 respectively. She had finished numerous graduate classes in sociology several years ago, but returned to the graduate classroom in Spring 2019, while, at the same time, working full-time at the Salvation Army in Galesburg.

“I decided to take advantage of the fact that I was already an employee at the Galesburg Salvation Army as their social ministries director and participate in an internship,” said Smith. “I was currently full time at 40 hours doing case management through five programs aimed at assisting single adults and families who were facing economic hardship and or homelessness.

Prior to Smith joining the staff at the Salvation Army, she said the agency’s social service and pastoral programming had been dormant.

“The officers, who act as the chief executives of both, were on a steady path of increasing both types of services, but they knew that support of the local community was vital to the success of the Galesburg Corps,” she said. “With this dilemma, one of my tasks for the internship was to create a community network to gain support within the social services community. Another task was to rebrand the Galesburg Salvation Army. Because the Corps sat dormant for almost a decade, most community members only associated the Salvation Army with the local Salvation Army Thrift Store.”

Smith said she fell in love with anthropology while finishing up her theatre degree at Western. She then thought about entering the Peace Corps, but realized she was being called to make changes in her life. She had kept in touch with WIU Sociology and Anthropology Professor Heather McIlvaine-Newsad, who suggested Smith pursue a master’s degree in sociology.

“I am so glad I listened, as it only fueled my passion for understanding the question of ‘why do we do what we do as humans,” Smith said. “Sociology has become the backbone of my professional world of social work.”

Using the sociological lessons she learned in the classroom, Smith said she has been able to assist the Salvation Army in her community with new ideas.

“I use the sociological perspective in all that I do,” she said. “I am so grateful for the professors at WIU who created my passion for humanity especially in today’s world.”

McIlvaine-Newsad said Smith’s graduate work is an excellent representation of why sociology is an important discipline for understanding the world.

“Jackie is a perfect example of a student who took full advantage of her undergraduate career at WIU to explore multiple interests in theatre and anthropology,” said McIlvaine-Newsad. “Using the skills she learned from both of these disciplines – public speaking, self-awareness, observation and critical thinking – Jackie was able to craft an exit option in sociology that allowed her to work full time and complete her MA at the same time. More importantly, her thesis option led to some important observations and positive changes for the agency where she is currently employed.”

For more information about the WIU Department of Sociology’s graduate program, visit wiu.edu/sociology.