A podcast highlighting the careers of Western Illinois University Broadcasting and Journalism alumni is embarking on its second season.

“The podcast has hit some milestones this year,” said Hoon. “We are proud that we have had over 5,000 views on YouTube, and 152 subscribers.” 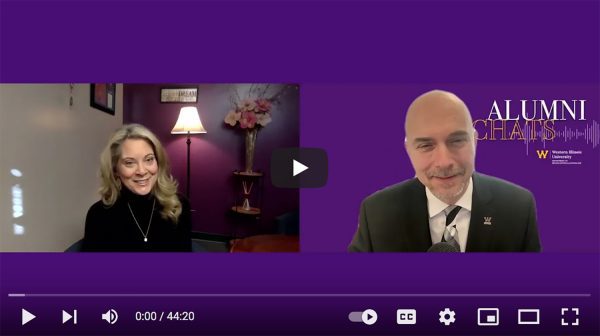 The 52nd episode featured 1996 alumna Renee Stoetzer Charles, who is the university spokesperson and executive director of public relations at Bradley University, in Peoria, IL. During her podcast, Stoetzer discusses her many activities as a WIU student, becoming Miss Illinois, her time in radio and television and moving into the public relations realm.

“Every episode is special, but now we have a record of Jim’s story,” said Hoon. “His interview is the most downloaded episode so far, and we hope that sharing stories such as Jim’s can be an inspiration to our students.”

Season two promises to be as robust as the first. Hoon continues to be contacted by numerous program alumni offering to be part of the podcast. This week, Hoon interviewed Angela (Hutti) Coulson, a 2003 alumna and meteorologist for Nester Media, KTVI/KPLR-TV in St. Louis. Future weeks will feature 2011 alumnus John Kendall, assignment manager for WEEK-TV in Peoria, IL; Mark Nootbaar, 1992 alumnus and senior writer and editor for the Office of Institutional Advancement at the University of Pittsburgh, Pittsburgh, PA; and 1984 alumnus Alex Rodriguez, of the Chicago Tribune Editorial Board in Chicago.

“We are so proud to highlight these successful alumni,” said Hoon. “Each one has a unique story to tell about the journey of their life and how WIU makes up a part of that story.”

The most recent edition of the podcast can be found at bit.ly/3FMNFY3.