Sometimes, comedy is no laughing matter. A longtime dream has come true for Chris Schlichting, a 39-year-old Davenport standup comic and longtime host of the Renwick Mansion’s “Tomfoolery on Tremont” comedy series. 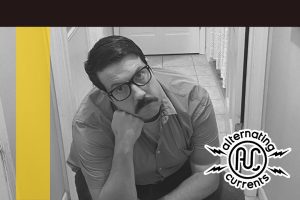 Chris Schlichting will do a short set on Friday night for Alternating Currents as part of a 90-minute comedy lineup at Front Street Tap Room, 421 W. River Drive, Davenport.

He’d been trying to line up a gig on the famous, clean comedy club Dry Bar for four years, and after he was finally given the chance in early 2020, he had to wait almost two more years for his special to be released.

“I’m excited, relieved, and proud. I worked very hard and honestly I still can’t believe this is real,” Schlichting (who works as a language arts teacher at Davenport’s Mid City High School) posted earlier this month on Facebook. If you want to see his act, download the Dry Bar app, and use the promo code “chrisschlichting” to get the first month free.

“Either way, special thanks to my wife Emily who has always supported me, and doesn’t even think twice when I ask if I can fly to Utah for 3 days to do a comedy show,” he posted. “Also, thanks to all of you guys, my schlickTEAM. I appreciate your love, and I promise to keep trying 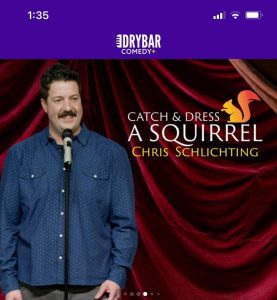 Schlichting had tried to get booked at the Dry Bar about four years before getting the call.

to make ya proud.”

In 2016, VidAngel CEO Neal Harmon announced the launch of VidAngel Studios to start creating original content. They kicked it off with Dry Bar Comedy’s comedy specials, according to https://store.drybarcomedy.com. At every show, they have three comedians perform, with different comedians every night. After the filming, the comedian’s comedy specials will go through a production process and then be available to stream on VidAngel and the Dry Bar Comedy App.

“Dry Bar is a super clean comedy show filmed in Provo, Utah. It’s essentially another paid comedy gig, but the real incentive is that they film your set and broadcast on their Dry Bar app and YouTube,” Schlichting said this week. “They also release clips of your special on all major social media platforms. Dry Bar has a huge following, so the exposure is incredible. It’s a legit credit that many past Dry Bar comics have told me that it has led to more things than Netflix or Amazon specials they have done.

“I have known about Dry Bar for a long time and I considered myself perfect for the show because I have always worked on the cleaner side,” he said. “This is a combination of still working as an educator. And I just prefer it. Clean is more my style. I’ve always preferred comics like Steve Martin, Brian Regan, or Jim Gaffigan. Just silly and lovable.

“The problem I wasn’t really sure how to even apply for Dry Bar,” Schlichting said. “I tried different emails and whatnot, but wasn’t getting any responses. I had actually given up, but after do a show in Madison, Wis., at Comedy on State, I discovered that they filmed your set for your personal use. It was a great show, so now I had a decent and professional looking clip. After finding out a buddy was going to film at Dry Bar, I asked about his process. 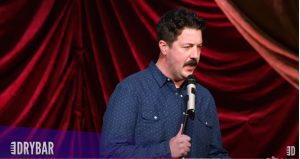 Chris Schlichting had his longtime dream come true with the release of his Dry Bar comedy this month.

“So now I had a legit email and a great clip to send. I heard back later that day, and essentially offered me dates. I was in disbelief,” he recalled. “I had been trying for maybe 3 years to get on that show, and just like that they were interested. I told my wife and she understood how important this was. Flew out early February 2020. Arrived a few days early and just explored Salt Lake City, just trying not to be nervous about this opportunity.

“Night of the performance, I got to the location and was just blown away by how cool the staff was. They really made ya feel like a superstar,” Schlichting said. “Packed house. Did two shows that night. Felt good about it. I tend to nit-pick my sets, but I was confident I gave it my all and delivered my best show. Flew home that night. Then came the hardest part…the wait.” 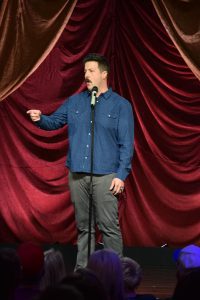 Schlichting performing his standup comedy at the Dry Bar in Provo, Utah.

He said comedians are not guaranteed that your special is even released and Schlichting heard from other comics that it can take up to six months. After a couple of weeks, Dry Bar reached out to him with a rough cut and wanted him to make edits.

“I was feeling assured that it would be soon. And then Covid happened, which delayed things as you can imagine,” Schlichting said. “The one thing that kept me sane during the pandemic was the thought that special would eventually be released. I had something to look forward to. However, it just kept getting pushed back. They had a backlog of other specials they were working on. They were always good at giving me updates, but those updates were usually my special release day just getting pushed back more and more.

“I understood, but at the same time it was really weighing on me,” he said. “Here I had this awesome show taped that could help my career, and I wanted to keep it quiet so I wouldn’t jinx it. Then late July, I received the final cut and was informed it would be released August 9th. I assumed it would be pushed back again, but it wasn’t. It dropped and the feedback was and still is overwhelmingly positive.

“It was actually very emotional,” Schlichting said. “When you work so hard at something, you just want it to pay off. So I’m still soaking it in, relaxing a bit. But don’t worry, I find myself still motivated to write new stuff and develop it.”

What’s next for Schlick and ToT?

Chris Schlichting started the comedy series at the 1877 Renwick Mansion (901 Tremont Ave., Davenport) in November 2018. He’s been hosting the standup shows ever since, usually twice a month, including nationally touring comedians. 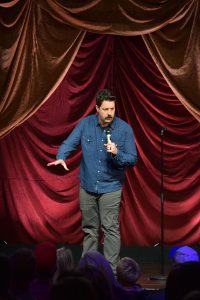 Schlichting, 39, of Davenport, works as a language arts teacher at Mid City High School in Davenport.

The next Tomfoolery on Tremont is Sunday, Aug. 22, at 8 p.n., featuring Zach Martina. Before then, Schlichting is doing a short set Friday at 8 p.m. at the Front Street Tap Room (421 W. River Drive, Davenport), as part of the weekend Alternating Currents festival. The fest is all free admission, and Friday night comics include James Stanley, Jim Flannigan, Kyle Scanlan, Rebekah Gibson, and Spencer Loucks.

Schlichting also will be part of an AC panel on cancel culture’s impact on comedy (presented by the QC Idea Factory), from 3 p.m. to 4 p.m. Saturday, at City Church, 324 Brady St., Davenport. That panel includes Donny Townsend, Mike Lucas and Kyle Scanlan.

For more on Schlichting, visit https://schlickcomedy.com/. Check out a couple of his Dry Bar routines HERE and HERE. For a complete list of Alternating Currents comedians, visit the Comedy tab at https://www.alternatingcurrentsqc.com/.

Jonathan Turner
Jonathan Turner has been covering the Quad-Cities arts scene for 25 years, first as a reporter with the Dispatch and Rock Island Argus, and then as a reporter with the Quad City Times. Jonathan is also an accomplished actor and musician who has been seen frequently on local theater stages, including the Bucktown Revue and Black Box Theatre.
See More Articles From Jonathan Turner
Advertisement
Tagged: Alternating CurrentsAlternating Currents FestivalChris SchlichtingDonny Townsenddry bar specialkyle scanlanMike LucasRenwick MansionTomfoolery on Tremontzach martina