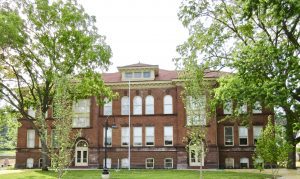 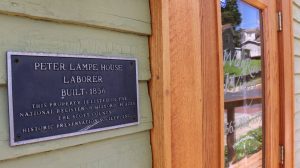 Davenport’s Peter Lampe House, ca. 1856, is located in the Village of East Davenport Historic District, listed on the National Register of 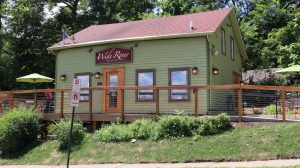 The Peter Lampe House, built around 1856, was restored into a Wide River Winery tasting room in 2016.

The district is significant for its working class housing built during the heyday of the lumber industry in the Upper Mississippi Valley, according to the awards. Sitting just up the hill from the Great River Road and the Mississippi River, and at the edge of the railroad embankment that runs through the Village of East Davenport, the Lampe House is said to have been a 19th 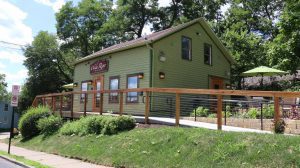 Wide River Winery in the Village of East Davenport is at 1128 Mound St.

In its new life (since August 2016), the house is the Wide River Winery’s Tasting Room. At one time serving weary and hungry travelers by providing a place to sleep in the attic and something to eat, “today the Peter Lampe House serves as a cordial and welcoming stop offering Iowa wine and snacks to neighborhood residents and tourists,” the state said.

“The restoration energized many history buffs. The building was vacant and in need of serious shoring up and stabilization, and the inside was a sadly deteriorating remnant of the 1980s,” the award listing says. “The completed project boasts a building exterior that remains nearly the same as it was in 1856, and an interior that shines with well-crafted cabinetry, wood floors and 19th century art.

“The wine tasting room has been a spark plug for the community,” the state said. “The project improved the tax base and added a fun and attractive destination in one of Davenport’s oldest neighborhoods.”

The restoration of the 1904 former school was honored for both being a preservation project which best exemplifies use of the U.S. Secretary of the Interior’s Standards for Rehabilitation while using State Historic  Preservation Tax Credit Program incentives, and the Sustainability in Preservation Award.

Owners Naval Station, LLC accomplished “the seemingly impossible feat of transforming the school that was on the verge of collapsing into a functional blend of modern amenities in an historic structure,” the state wrote. 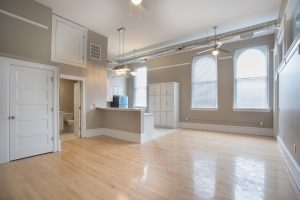 An interior of one of the restored Naval Station apartments, finished in 2019.

The project benefits from a design that promotes a high quality of life and implements an extensive storm water management system, all of which led to public infrastructure improvements and privately owned home improvements throughout the neighborhood.

“In addition to meeting Iowa’s Green Streets criteria for redevelopment, historic materials were salvaged from the building itself as well as former historic buildings throughout the Midwest to facilitate compliance with the NPS standards on historic preservation,” the state said.

Natural light from the original windows and skylight above spilling into community areas that showcase original and salvaged maple floors, plaster ornamentation, the original stage flanked by iconic columns, and the cadence of doors with transoms above that once opened into classrooms now entering apartment homes.

The financial catalyst for the project was a CDBG grant stemming from the 2008 floods in Iowa, and it was supplemented with funding from the Federal and State Historic Tax Credit, grayfield tax credit and enterprise zone tax credit as well as conventional equity and financing.

Completed in 1904, the construction of Buchanan School was part of a major program at the turn of the 20th century to build new schools in Davenport.

Buchanan School was an elementary school, designed  by the local architectural firm of Clausen and Burrows. Years later, when the school was eventually closed, the building survived through periods of vacancy and varied repurposing — first as a U.S. Naval Training Center, and later as a storage facility, according to the state.

In 1983, Buchanan School was listed on the National Register of Historic Places, and noted as “well preserved,” but by the time rehabilitation planning got underway in 2014, the building had fallen into extreme disrepair, literally at risk of collapse and without doubt on the brink of 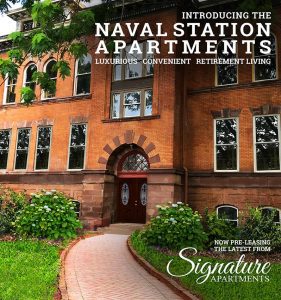 “This impressive project has saved a beautiful historic building and adapted it for new use as senior housing — the Naval Station Apartments,” the awards say. “The rehabilitation work was extensive and the project successfully conforms with the Secretary of the  Interior’s Standards for Rehabilitation.

“Fortunately, in spite of the extreme deterioration of the building, most of the original features and details still remained,” the state said. “The school’s original plan layout of circulation, classrooms and large assembly rooms was unchanged— now the classrooms are comfortable apartments, and the assembly rooms are enjoyed as shared tenant space.”

In the apartments, the original high ceilings and restored windows and doors help retain the scale and feeling of the former classrooms. Daylight floods in from the large windows and through transom widows in the apartments’ new interior walls.

In the third-floor assembly space, the original stage and the gracefully arching ceiling and large central skylight were restored. In addition to meeting the Standards for Rehabilitation, the project also successfully met the criteria of the Iowa Green Streets Program, which promotes public health, energy-efficiency, water conservation, smart locations, operational savings, and sustainable building practices.

“The rehabilitation of Buchanan School has created sustainable mixed-income housing for retirees, and the project has been a catalyst for public infrastructure improvements and private home improvements throughout the neighborhood,” the state said.

“What began as a school and had become a blight on the local community is now a shining reminder of our history for generations to come.”

More information about the Iowa awards is available at iowaculture.gov and preservationiowa.org.