As a center in the Quad-Cities for comfort during grief, and celebration of life, Trimble Pointe is using art to reflect both.

The nearly six-year-old facility at 701 12th St., Moline, recently commissioned Detroit artist Marcus Glenn to create three mixed-media hearts which are now on permanent display in the entrance atrium of Trimble Pointe, as a colorful sign of support for the community, especially healthcare workers and first responders during the Covid-19 pandemic.

“We were blessed with the opportunity to build Trimble Pointe, a legacy building where the community can gather to celebrate all of life’s events,” Eric Trimble said. “Whether people come for a funeral, a wedding, a baby shower, or a class reunion, these hearts will serve as a reminder of the love, strength, and resilience shown by our neighbors during this challenging time.”

“We view this building as a community building, a legacy building, like a museum or as a city hall, a gathering place,” Trimble said. “We think it’s important to beautify it, with the art. The fact that we like collecting art, we have the perfect place to display it.”

According to Park West Gallery in Southfield, Mich., “Marcus Glenn is one of the most exciting young artists to emerge in recent years. He has commissioned works of art hanging in exclusive private and public collections throughout the world. He is one of the most widely collected contemporary artists, and his collectors eagerly await each new creation. Marcus has sold artwork in 67 different countries to many thousands of art enthusiasts.” 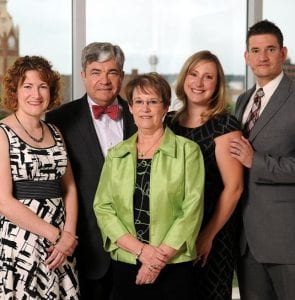 Eric and Barbara Trimble with their children, Amy (left), Reid (right) and his wife Jennifer.

Glenn was selected to be the official artist for the 56th-annual Grammy Awards and the Amelia Island Jazz Festival. “A lot of his artwork is jazz-related,” Eric Trimble said. “It’s very impressive.”

Eric and Barbara Trimble met Glenn on a Caribbean cruise (featuring a Park West art auction) that returned to Miami on March 1, just before the Covid-19 outbreak really spread throughout the U.S., shutting down much of the Trimble businesses.

“We met him, he showed some pieces, and we commissioned him to do these three pieces, not realizing that a) the virus would be hitting and b) all the unrest that we’re facing, too,” Eric said.

“We just bought ‘em because we liked ‘em,” he said. “We thought we’d hang one, but all three fit very well, and the theme. I’m not sure we understood totally the title when we bought them. We knew they were a chaos theme.”

Glenn titled them based on the chaos of the present period. The acrylics are mixed media because they feature textures of metal and glitter.

The triptych heart art adds to many other works at Trimble Pointe, where the family shares their collection with the public. On display are works by local artists Hunt Harris (photography), Steve Sinner (wood turning), Paul Herrera (stone engraving), and Father Edward Catich (watercolor and calligraphy), as well as noted American and international contemporary artists. 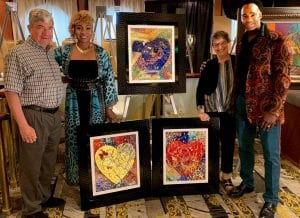 The Trimbles attended Figge art auctions and he loves Steve Sinner’s wood-turning pieces. In previous years, Eric was out-bid, but in 2016, “my wife wasn’t sitting close enough to me to stop me from bidding, so we got a 30-inch wood-turned vase, that’s just absolutely gorgeous,” he said.

Their attorney gave them a slate engraving with the Trimble logo, by Paul Herrera, and they have a photo of the current I-74 bridge that’s being replaced. “That’s why we’re here,” Eric said.

Planning for Trimble Pointe began in 2006, when the state first notified the family that properties would need to be acquired for the new bridge. “What we’re opening is a two-story landmark event center for all events in the life of a family and community,” Eric Trimble said at the time of the 2014 opening.

CityView – with a 250-person capacity — was built to host receptions, weddings, birthday parties, anniversaries and of course, funeral receptions. In 2014, the space hosted the 15th class reunion (16 years after graduation) of the Moline High School Class of 1998, of which Reid Trimble (the company’s funeral home manager, and Eric’s son) was a member.

Starting in the art business

The Trimble legacy began from an art business, in March 1874, as “E. B. Knox, Picture Framing and Undertaking.” Edwin B. Knox, a pioneer undertaker and early mayor of Moline, began his business on Third Avenue (now Moline’s River Drive) at about 18th Street, near the current site of the old post office building.

Paintings at Trimble Pointe by Marcus Glenn of Detroit.

He soon moved across the railroad tracks into a new building located on the site of the parking lot on the west side of 15th Street between 4th and 5th avenues.

In 1908, after Edwin Knox’s son, Luther, had joined his father in business, they closed the picture framing and art supply portion of their business, relocated to a new building they built on 5th Avenue and 18th Street. A final move to the funeral home’s long-time location on 6th Avenue and 21st Street occurred in 1923, with the purchase of the former Barber residence and its conversion into a funeral home, which they renamed Knox Funeral Home.

That building was one of the earliest examples of the then-new ‘funeral home’ concept in the Midwest — a dedicated home for funerals, rather than a store-front building, according to the business history at trimblefuneralhomes.com/who-we-are/history.

E. B. Knox died in 1926, and Luther continued to operate the funeral home until selling to Dorothy and Riley Trimble on July 1, 1945. The firm operated as Knox-Trimble Funeral Home until 1960, when it was renamed Trimble Funeral Home. Eric Trimble joined his parents in business in 1969, and became president of the firm upon his father’s death in 1983. The firm has continued to expand, with the construction of the Coal Valley funeral home in 1977, and the acquisition of the Aledo funeral home in 1981. The Aledo funeral home was sold to long-time manager Annette Speer in 2003.

For the first time since 1906, the firm diversified into retail in 1985 when it acquired Julius Staack and Sons Florist, Moline’s oldest floral shop, founded in 1877. In 1990, the shop, now Staack Florist and Event Planners, relocated to a new building near the Moline funeral home. The flower shop was sold to long-time manager Louise Lorimer in 2010.

The State of Illinois acquired the firm’s main location in downtown Moline for a new I-74 bridge, forcing the family to relocate in 2014. Committed to staying in the center of the Q-C area, the Trimble family purchased the former Irving School property at 701 12th St., and built Trimble Pointe, a multi-faceted development.

The Wilson House has been restored by Sean Vogler, owner of Olde Town Roofing.

Because of Covid, Trimble Funeral Home has done virtual funerals, or graveside services with immediate families.

“When we built the building, we put in fairly sophisticated camera equipment, just for doing that, webcasting, and offered it quite a bit and really nobody was too interested,” Eric said. “We really haven’t done much of it until now. We will be doing a lot more of it. It’s worked out well.”

The impact of Covid-19 really hurt their businesses, with the CityView reception center closed since March. “At a time when people need hugs the most, they’re getting them the least with social distancing,” Eric said.

WaterMark Corners, at 15th Street and River Drive in Moline, reopened June 15, and its hours are 10 a.m. to 2 p.m. Monday to Saturday.

For more information on the Trimble companies, visit trimblefuneralhomes.com/.

Jonathan Turner
Jonathan Turner has been covering the Quad-Cities arts scene for 25 years, first as a reporter with the Dispatch and Rock Island Argus, and then as a reporter with the Quad City Times. Jonathan is also an accomplished actor and musician who has been seen frequently on local theater stages, including the Bucktown Revue and Black Box Theatre.
See More Articles From Jonathan Turner
Advertisement
Tagged: local artlocal art galleriesMolinetimble pointetrimble artworkstrimble companiestrimble funeral homeWaterMark Cornerswilson house