When I heard that the prolific, amazing Alex Richardson was updating the 1882 Henrik Ibsen play “An Enemy of the People” to a tighter, slimmer, modern version – addressing science, disease, truth, corruption, adultery and journalism – I briefly wondered if there would be a 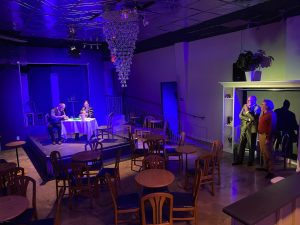 spin on one of Donald Trump’s endlessly repeated lies, the press as the real enemy of the people.

That phrase is surprisingly not uttered in the utterly absorbing, thought-provoking “Enemy of the People” at the new Mockingbird on Main in downtown Davenport, but Richardson has made the taut drama (with good doses of wry, caustic comedy) into something thrillingly, frighteningly relevant to today’s tense, polarized times.

Richardson – a smart, compassionate 27-year-old East Moliner – who’s been writing plays for almost a decade – created a smart, compassionate piece in the intimate cabaret-style theater, slashing the original from five acts and 30 characters (stretched across three hours), to just five characters and one act, across about 80 minutes. Led by first-time director Victoria House, each actor is ideally cast and strongly spreads their wings, wisely and creatively using much of the 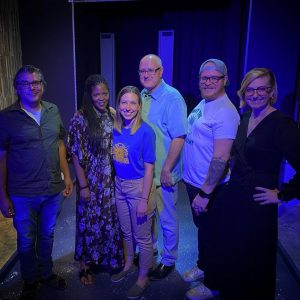 interior space beyond the technical boundaries of the small stage.

In the story, a doctor (here played by Mischa Hooker) realizes that the new expansion for his town’s factory is releasing toxins into the town’s water supply. His brother, the mayor (Doug Kutzli), doesn’t believe him and seeks to bury the story. Every character tells us their side of the story as the truth gets blurrier and blurrier, and it’s increasingly difficult to know who to root for or believe.

Not only is it riveting and electrifying to witness a world premiere production, from a talented local writer, the way it’s written and executed also keeps the audience on its toes. The pre-recorded Mockingbird announcement notes that we are sitting on the set, so here theater is literally not a passive experience – there’s no “fourth wall” separating us from the performers.

It’s not interactive, per se, but the first scene for example has the homosexual, socialist, Jewish journalist Hovstad (an excellent Ian Heaton) interviewing the brilliant, questioning Tomas Stockmann for his newspaper, in a “study” on one side of the theater. As many characters do throughout the play, Richardson and House also has Heaton deliver short, withering commentary to the audience intermittently, with a split lighting change each time.

Actors occasionally walk through the audience, and a great scene creates a bar at the back counter (forcing the audience to turn their gaze) between Heaton and Jo Vasquez, as the 25-year-old daughter, Petra, who is perpetually angry, cynical, sullen and sarcastic. That snarky scene (which features House as a silent bartender and the smallest cups I’ve ever seen) makes us feel we’re all patrons at the bar (albeit without drinks, yet).

One of Richardson’s best lines is in the first scene, when Hovstad is at Stockmann’s house, and he tells us, “I am a guest at their home and I 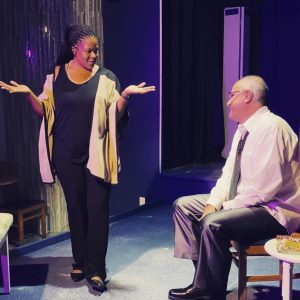 Alisha Hanes and Doug Kutzli in “Enemy of the People.”

might as well have been a ghost.” (I wondered if that was a reference to Ibsen’s “Ghosts,” to which “An Enemy of the People” was reportedly a response.)

Richardson deftly addresses our current themes of political leadership, public beliefs, abuse of power, the need to trust science and truth, how much to tell the public, and how and whether to do to the right thing, when confronted with life-threatening challenges. Kutzli is dominating as Peter, the wily, slimy mayor who wants to protect the livelihoods and economy of his town (and his reputation), even though it may mean doom for the health of many.

Hovstad wants to believe in the scientific consensus of those who found the factory is poisoning the water supply, and notes everything the mayor is doing “isn’t technically illegal but outrageous.”

Each of the play’s five characters is outspoken and has stubborn points of view, but the one whose motivations were least clear to me was Katherine, wife of Tomas, played by a solid Alisha Hanes. She doesn’t seem to rise to her husband’s defense, and inexplicably has an affair with his brother, and wreaks even more damage later. That didn’t seem to ring true to me.

Richardson’s works have been produced at several different companies, ranging from originals to adaptations, comedies to dramas, as well as film. His most recent plays include “Their Town” and “(a work in progress),” both staged at Playcrafters Barn Theatre, and “Alone” at the QC Theatre Workshop as a part of their Susan Glaspell festival. As devastating as the coronavirus pandemic has been, it’s been great for his productivity, including this biting, satisfying “Enemy.”

He also has a new podcast, Barely There Theatre, where original audio plays (20-60 minutes) are released every month for free. You can subscribe at barelytheretheatre.com/listen.

“Enemy of the People” (done without intermission and masks required of all patrons) will continue at 8 p.m. Oct. 7-9 at 320 N. Main St., Davenport. Tickets are $15 and available at www.themockingbirdonmain.com/coming-soon.