In theory, Seven Brides for Seven Brothers has an unflinchingly chauvinistic  premise; Adam Pontiphee decides that he’s going to marry Milly. He proposes right after meeting her. He brings her up to his homestead in the mountains of Oregon in 1850. He neglects to mention that he’s got six other younger brothers, and that she’ll have to cook, clean, and mend clothing for all of them. But he baits her with romance and switches to that.

Add to that, his six younger brothers actively kidnap six other young women from town in order to take them as brides.

So why does Seven Brides for Seven Brothers work? How is this show still produced? It starts with a borderline marriage of convenience between a man and woman who aren’t yet in love, but its the idea of being in love that binds them.

Nevertheless, Seven Brides for Seven Brothers works. It still gets produced. And it was a terrific joy to watch at Circa ‘21 with Sara on Sunday night. I highly recommend getting tickets if you have the inkling to go.

There are several levels on which it works. You can love it despite the material, because it has aged into sort of a self-parody. Even by 1954 standards, when the MGM released the film version on which the stage production is based, the concept of a man taking a woman over his shoulder, bolting up the mountain with her and courting her until a parson can be reached for marriage, it would seem to endorse the surrendered wife complex.

But it’s a comedy. And I watched it as satire. On that level, it worked.

You can also love it because of the material. To that effect, it still succeeds as a comedy. But more as a farce. In theory, the girls were wanting to be swept away by the Pontiphee Boys after already having been introduced to them at the social. Clearly, Dorcas, Ruth, Liza, Martha, Sara, and Alice preferred Benjamin, Caleb, Daniel, Ephraim, Frank, and Gideon to the men who were courting them in town. Their reluctance to commit almost makes their kidnapping like a deus ex machina. They are just waiting for the Pontiphees to make a move. 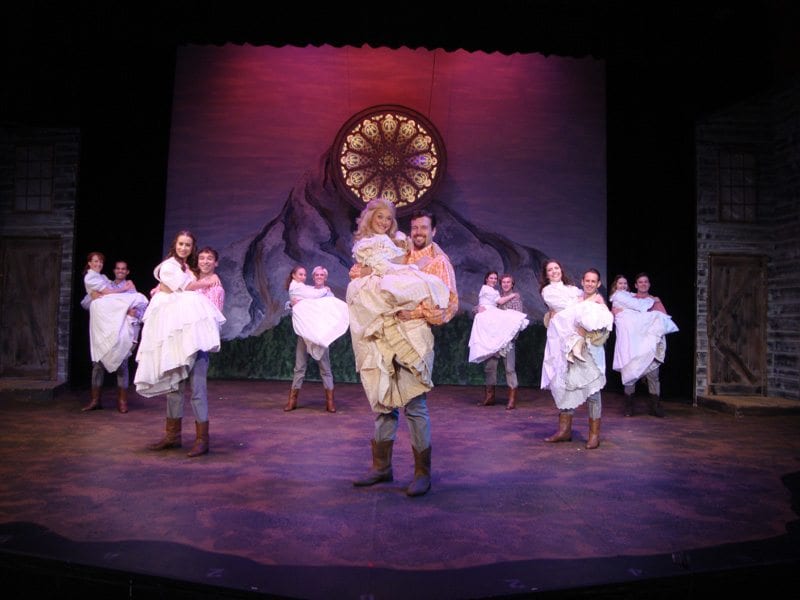 As such, Milly is furious when she finds out that Adam not only encouraged but assisted his brothers in taking their gals up from town to their ranch. And here the play gives them the chance to try to do the right thing. Let the girls sleep in the house through the winter. No hanky panky. The boys stay in the barn. Return the girls come spring.

This very delicate balance actually makes the Stockholm Syndrome plausible. After all, last time I checked, the remake of Disney’s Beauty and the Beast is still the top grossing movie of 2017.

As was the case with Rock of Ages, though, you’re not really paying for a ticket and expecting to get a major life lesson out of Seven Brides for Seven Brothers! It’s a hilarious play about guys who want female companionship, females who yearn for men, and the men, being mountain men, going against the careful instruction of Milly and cavalierly going in and taking the women as their own. Never is that a message being promoted. We laugh at the absurdity! It’s written as a crowdpleaser. And it was carried out as such.

Jon Reinhold, a journeyman actor in his first Quad Cities residency, plays Adam. He has a deep frosty voice. It works. He’s self-serious, but the actor is winking at us all the while. Sara Tubbs, a local talent (so great in A Christmas Carol at Music Guild, and I Love You Because at Black Box), plays the part of Milly. Milly cracked me up in the way that she threw Adam’s pompous masculinity back in his face. And Tubbs is so great because she can alternate very suddenly between humor and pathos. She sees the absurdity of Adam and his brothers behaving like heathens at the kitchen table, making crude jokes about Adam and her love life, and getting in knock down dragout fights. But doggonnit if she isn’t smitten with Adam. It’s worth housebreaking his unruly brothers to save the marriage. And over the course of the play, Adam and Milly do grow to love each other. What is the phrase? Choose Thy Love Then Love Thy Choice? They succeed better than most impulse weddings.

Adam, deep down, is a gentleman. Actually, all seven brothers are gentlemen. They just haven’t been taught to access that side of themselves. The two steps forward, one step back. Oops, we may have forcibly brought women back to marry us… but we did win their hearts at the social!

If the Guardians of the Galaxy got along right away, and everything went according to plan, the two movies wouldn’t nearly be as hilarious as they are. Seven Brides for Seven Brothers succeeds because the brothers fail so spectacularly at etiquette, even after making progress.

Kevin Korczynski, Carlos Morales, Paul Tiemann, Bobby Cook Gallagher, Will Leonard, and Joey Boos play the other six brothers. Joey Boos reminded me a lot of Gilligan from Gilligan’s Island. He had a funny voice, and funny eyebrows.

Caitie Moss, Erin Churchill, Kayli Jamison, Audrey Leigh Johnston, Kristina Miranda Sloan, and Larren Woodward round out the seven brides. They keep up very well with the guys in the dancing. As far as the rest of the cast, Circa ‘21 veteran character actor Tom Walljasper plays the preacher, and Brad Hauskins, CJ Williams, Chris Galvan, Marc Ciemiewicz, and Jordan McGinnis played the various suitors from whom the girls want to escape.

Directed by Ann Nieman, with excellent scenic design by Kris Eithreim, musical direction by Ron May, and costume design by Gregory Hiatt, Seven Brides for Seven Brothers at Circa ‘21 is lightning in a bottle. It gets away with the story it tells. Greg O'Neill
Greg O'Neill is a Spanish teacher at Lewistown Community High School. A native of Rock Island, he currently resides between there and Lewistown. He has been onstage at Quad City Music Guild, Playcrafter's Barn Theatre, Richmond Hill Theatre, and Genesius Guild. He got his start at St. Joseph's Catholic Church when he appeared in Tales of Wonder at the age of eleven. He enjoys movies, theatre, books, baseball, and writing stories.
See More Articles From Greg O'Neill
Advertisement
Tagged: Circa '21Districtlocal theaterSeven Brides For Seven Brothers