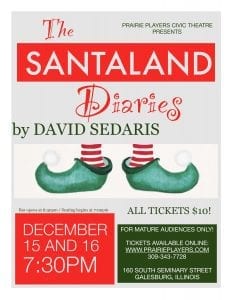 Taking a diversion from the usual holiday fare, the 102 year old organization will present David Sedaris’s The Santaland Diaries on Friday, December 15 and Saturday, December 16.

The Santaland Diaries chronicles David Sedaris’s experience as a worker in Macy’s Santaland display. This compact, one-character comedy is a hilarious – and heartwarming – cult classic, featuring comic encounters during the height of the holiday crunch.

Directed by Prairie Players Civic Theatre’s very own Tristan Tapscott, the production will star Quad City actor and filmmaker Anthony Natarelli. Natarelli has appeared in a myriad of productions in the Quad City Area including Hedwig and the Angry Inch, Angels in America, High Fidelity and two previous productions of The Santaland Diaries.

Biting, irreverent and full heart, this evening of David Sedaris will offer a welcome break from the chaos that surrounds the holidays. Leave the kids at home, come enjoy a drink and have some good laughs. Performances will be held on Friday, December 15 and Saturday, December at 7:30pm. The bar opens at 6:30pm, seating begins at 7:00pm and the show begins at 7:30pm. All tickets are $10 and can be purchased by visiting www.prairieplayers.com.