The following story is from Sean Leary’s blog, What The *&&^^^&*(^%* Is Sean Leary Thinking? It was originally published on the blog on Aug. 15, 2000. We’re rerunning it as part of our Einstein’s Sister Spotlight looking back at the career of the popular Quad-Cities band in advance of the release of their first record in almost two decades Saturday as part of Record Store Day at Moline CoOp Records.

Quad-Cities power-pop band Einstein’s Sister has signed a deal with Oxygen, the new cable network that is aimed at women and partially funded by Oprah Winfrey.

The contract allows the network, which debuted earlier this month, to use songs from the band’s album “Learning Curves” for its music beds — tracks played in the background during promos, between-show bumpers and commercials. The contract also gives Oxygen permission to use any of the CD tracks at any time for any show or Internet broadcast.

“We really aren’t sure when and where our songs will be used, but they were very interested in obtaining the licensing rights from us,” said guitarist Kerry Tucker. “They’ve run a couple of shows by us that we might be on. 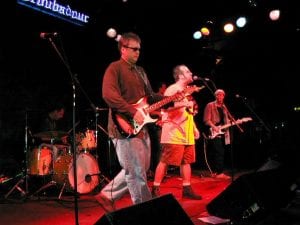 Einstein’s Sister plays at the Troubadour in Los Angeles in 1999 as part of the International Pop Overthrow festival.

“What they seem to be good at is using the music effectively. (During previous music beds) they’ve listed the band’s name and song title at the bottom of the screen as they’re running the song, which is unusual.”

The connection between the band and the network was made through the band’s involvement with representatives of two independent labels — Oarfin Records and Pravda Records, Mr. Tucker said. The powers that be at Oxygen got “Learning Curves” from those sources, liked what they heard, and sought out the band.

“We’re pretty excited about it,” Mr. Tucker said. “We know that we’re lucky in a lot of respects because this is a way to make a little revenue for something that’s already done.”

A songwriting deal with ASCAP will allow the band to collect royalties on the airplay. Einstein’s won a contract with the well-known songwriters’ organization in 1998, soon after the release of its CD, “Oceanus.”

“They had a contest for people making less than $20,000 a year as a songwriter, and we (Mr. Tucker and Einstein’s co-writer Bill Douglas) were definitely over-qualified,” Mr. Tucker said.

Five hundred songwriters nationwide were picked by ASCAP, which granted them five-year pacts that cover fees and the publishing deal.

The Oxygen agreement isn’t the only licensing possibility the band has on its plate. According to Mr. Tucker, there is also a strong possibility that MTV will be using tracks from the CD for the shows “Road Rules” and “Daria.”

“But that’s still all up in the air right now,” he added.

Also up in the air, but slowly descending earthward, are plans for the group’s next album, which Mr. Douglas and Mr. Tucker have begun writing. The band is looking to commence recording in June.

Given that “Learning Curves” earned high critical praise both locally and nationally (ending up on a handful of critics’ Top Five lists for 1999), the duo is feeling the heat to match its quality.

“You have no idea how much pressure there is,” Mr. Tucker said with a laugh. “The problem for us is that everything we write has to be as good as the last album. We’re trying different things this time.

“But it’s a good situation to be in,” he added. “We’re so happy about this, about everything that’s happened over the last year. It’s really been a great experience.”

Sean Leary
Sean Leary is an author, director, artist, musician, producer and entrepreneur who has been writing professionally since debuting at age 11 in the pages of the Comics Buyers Guide. An honors graduate of the University of Southern California masters program, he has written over 50 books including the best-sellers The Arimathean, Every Number is Lucky to Someone and We Are All Characters.
See More Articles From Sean Leary
Advertisement
Tagged: andy brockBill Douglaseinstein's sistereinstein's sister spotlightinternational pop overthrowkerry tuckerMarty Reyhonsoprah winfreyoxygen networksteven volk