Home › Columns › Sean Leary › Sure, Chris Evans May Be The Sexiest Man ALIVE, But What About Dead Guys?

Sure, Chris Evans May Be The Sexiest Man ALIVE, But What About Dead Guys?

People magazine shocked the world this week when it announced Chris Evans was the NEW Sexiest Man Alive!

As recipient of the honor, he receives a $1,000 scholarship to the People School of Vapid Journalism, a free year’s supply of Turtle Wax, a 1995 Ford Festiva and free refills of his favorite beverage at participating Taco Bell restaurants dining room only. In addition, he will be stalked by a vengeful, shirtless, Andrew Tate, who swears the thing was rigged.

Evans is having none of it. He has repeated over and over that he wants to be known as a serious actor, darn it — not just some pretty boy! And to prove his serious thespian intentions, he has posed bare-chested on almost every magazine available in the past two months. I hear that’s how Olivier got started.

But Evans can rest assured that if he ever comes to the Quad-Cities, he’ll be taken at least as seriously as The Situation.

Many Quad-Cities area women were pulling for different candidates for Sexiest Man Alive!, and some even questioned why they had to constrain themselves to people who were alive? Why not include some of the sexiest dead men too? After all, there are so many more to choose from, and it’s really showing an incredible bias against the non-breathing.

In fact, an unscientific survey of local women turned up a slew of candidates for the lofty honor. Here they are, along with admirers’ reasons why they should’ve taken the prize:

Mr. Rogers: “When he removed his sweater, I keep chanting, `More! More! More! Take it ALL off!’ at the TV,” said one ashamed yet visibly aroused woman.

Orville Redenbacher: “He gets me poppin’,” one admirer said. “I just want to run my fingers through the artificial-butter flavoring he uses for hair gel, remove that sinful bow tie and tell his nephew to go play in the cornfields.”

Grimace: McDonaldland’s big, purple, shake monster rouses the savage beast in one lactose-tolerant woman. She says, “Despite his arms barely being able to reach a shake container to his constantly opened mouth, I’m sure they would be able to hold me securely as I stare into his bulbous, unblinking eyes and whisper sweet nothings into his ear — providing I can locate it.” 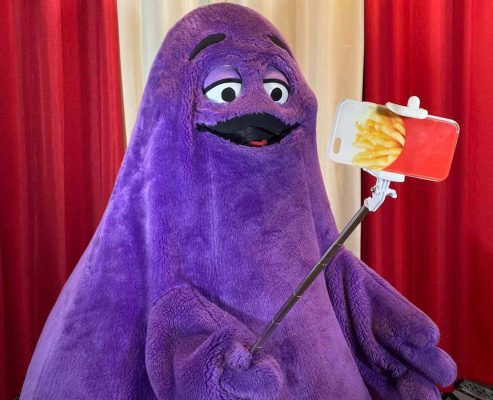 Grimace: His shakes aren’t the only thing that’ll make you thirsty.

Don Knotts: “I love a man in a uniform, even one with a concave chest,” a smiling fan said of the former Barney Fife. “And the chic bodysuits and lapels he wore as Ralph Furley on `Three’s Company’ make me want to scream, `Boyfriend, two would be company for us.’ ”

Abe Vigoda: “Everyone says there’s more than one Fish in the sea — but not for me!” one panting female said of the man from “Barney Miller.”

Louie Anderson: “His high, whiny voice, those buck teeth, the stomach that would provide shade to a small boy — oh . . .”

Ernest the “Hey Vern!” guy: “Some people say he’s just a hayseed moron with the IQ of a piece of straw, but I like a man who reeks of cow manure and would be intellectually challenged by the instructions on a shampoo bottle,” said one woman. “I’ve been thinking of changing my name to Vern, just so that I know he’ll always be speaking to me.”

Casey Kasem: “Here’s a long-distance dedication to my little bushy-eyebrowed announcer: `Casey, you’ll always be No. 1 with a bullet with me,’ ” one frantic redhead said.

While those women argued the cases of their lust objects passionately, perhaps the most glowing nomination for Sexiest Man Dead Or Alive is from a cowboy, who, on a steel horse he rides, who noted, “There’s really only one pick for the sexiest man dead, and it’s Jeffrey Epstein, who, by the way, didn’t kill himself!”

I don’t know, cowboy, I’d have to disagree. At least Grimace wasn’t a known pimp and pedophile.