Moline’s Spotlight Theatre (1800 7th Ave.) will lean into its niche as a premier family-friendly theater for 2022, as four of its five musicals are based on stories aimed at children. 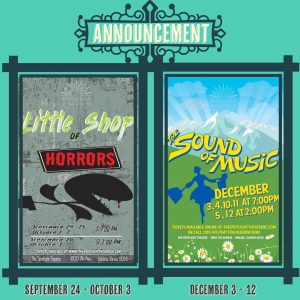 The remaining Spotlight shows this year are “Little Shop of Horrors” and “The Sound of Music.”

“We love doing shows the whole family can come to,” Spotlight co-owner Sara Tubbs said Tuesday. “ ‘The Producers’ is geared more PG-13, but everything else is super family friendly. We have kids shows too; we will be announcing those fairly soon. We just think it’s great to bring your kids and experience theater together.”

After this fall’s “Little Shop of Horrors” and December’s “The Sound of Music,” the Spotlight is 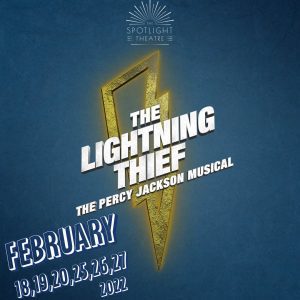 The Spotlight Theatre will launch its 2022 season with “The Lightning Thief: The Percy Jackson Musical.”

scheduling the following shows in 2022:

The Spotlight decided for a clean slate in ’22, and not bring back some shows it had to cancel in 2020, including “Oliver,” “Tarzan” and 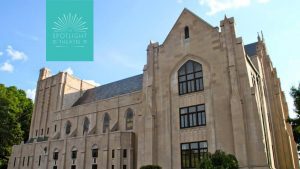 The Spotlight Theatre is at 1800 7th Ave., Moline, in the former Scottish Rite Cathedral.

“Evita,” which will come back in the future.

“We just wanted to give a little breather,” Sara Tubbs said. “When we decide to do those shows again, we’re going to have new auditions.”

Her husband, Brent (theater co-owner), said some cast members from the 2020 shows (like the boy who was to be Oliver), couldn’t do them for 2022, so it makes sense to re-cast them. “Even a lot of the kids we knew in ‘Oliver’ last year, have hit their growth spurt,” he said. He is excited to do the local premiere for “The Lightning Thief,” since its rights recently became available.

“We love the story, we love the music,” Sara said. Of “Tuck Everlasting,” she said: “It’s beautiful music, a really sweet story. We really wanted all of our shows to be uplifting next year. We thought of doing some really fun, magical, uplifting stories.”

Those interested in working on directing staffs for the 2022 shows should send their resumes to info@thespotlighttheatreqc.com. “Little Shop of Horrors” is to take the stage Sept. 24-Oct. 3, 2021, and auditions for the classic “Sound of Music” (Dec. 3-12) will be held Aug. 21.

Sara Tubbs also is looking forward to Saturday, July 17, when the Spotlight’s “Tubbs & Moss: A Vintage Jazz Experience” expands to a big 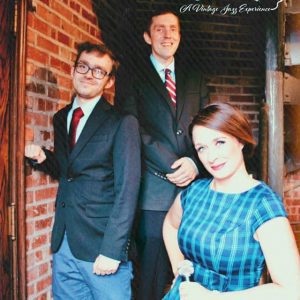 band on the main stage, rather than its usual monthly spot in the theater’s Blueprint Bar & Lounge. From 7 p.m. to 9 p.m., she will sing standards with pianist Mason Moss, who did the arrangements with the following band – 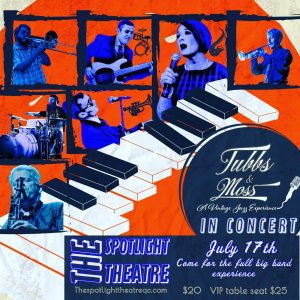 A Tubbs & Moss jazz band will perform at the Spotlight main stage this Saturday from 7 p.m. to 9 p.m.

The Green Room Bakery will be providing delicious deserts for sale, with a complimentary macaron for VIP ticket-holders. VIP tickets also include candlelit table seating on the floor. The bar will have drinks for sale.

“We’re excited; this is the first time I have ever sung in a band,” Sara said Tuesday. “I have been loving it. It’s so fun, the energy you feel in the band. You do a song, and it’s different every single time, improvising on the spot.”

“We thought it would be so fun to do a big band concert,” she said. “We’re normally in the bar, super casual. We wanted to have a whole band on stage. We do like to have people get up and dance.”

Tubbs & Moss will be back in the Blueprint for August, and possibly next do the big band for December. Tickets for Saturday are $20 for general admission and $25 for VIP seating at tables. The VIP sales close on July 16 and you can reserve tickets at www.thespotlighttheatreqc.com/jazz-lounge.