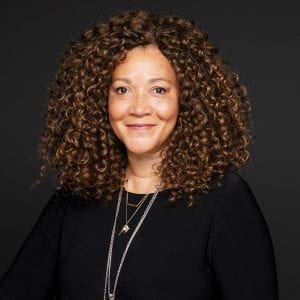 Former NPR journalist Michele Norris is scheduled to speak at the RiverCenter March 11.

Tonight, WVIK Quad Cities NPR will host the latest of its series of “Hidden Conversations” – How the black community is portrayed in marketing and media, on Facebook Live at 6 p.m.

Davenport-based leadership and diversity expert Dr. LaDrina Wilson will speak with Quad-Citizens Mikhayla Hughes-Shaw, reporter for WHBF and KLJB news and host of LOVE Girls: The Podcast; Skubie Mageza, sports anchor and reporter with KWQC, TV6; and Dr. Joseph Miller, professor of sales and marketing for St. Ambrose University about how the Black community is portrayed in marketing and media — all from a local perspective.

Launched last fall, the “Hidden Conversations” programs are a 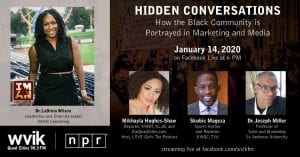 WVIK’s “Hidden Conversations” will be on Facebook Live tonight, Jan. 14, at 6 p.m.

On March 11 at the RiverCenter, 136 E. 3rd St., Davenport, doors open at 5 p.m., with appetizers, desserts, coffee, and cash bar available. At 6 p.m. will be the keynote address with Michele Norris, Peabody Award-winning journalist, founder of The Race Card Project and Executive Director of The Bridge, The Aspen Institute’s new program on race, identity, connectivity and inclusion. At 7 p.m., Norris will answer questions from the audience, moderated by LaDrina Wilson.

For more than a decade, Norris served as a host of NPR’s All Things Considered, where she interviewed world leaders, American presidents, Nobel laureates, leading thinkers, and groundbreaking artists. She has also produced in-depth profiles, interviews, and series for NPR News programs, as well as special reports for National Geographic, Time Magazine, ABC News, and Lifetime Television.

Norris created The Race Card Project, an initiative to foster a wider conversation about race in America, after the publication of her family memoir, The Grace of Silence.