I am not a Disney fan.

In fact, quite the opposite.

I find most Disney fare to be cloying, predictable, archaic, boring, and tiresome, and the only Disney material I’ve ever really loved has been “Aladdin” (in large part due to Robin Williams’ genie) and “The Jungle Book,” because it holds fond memories from my childhood.

I say this to begin this review because if someone like me, someone who is not a Disney fan by any means, and who found the “Beauty And The Beast” movie to be fairly ridiculous aside from the music, if someone like me loved Circa ’21’s latest musical, “Beauty And The Beast,” as much as I did, well, imagine how much someone who actually LIKES Disney is going to enjoy it? 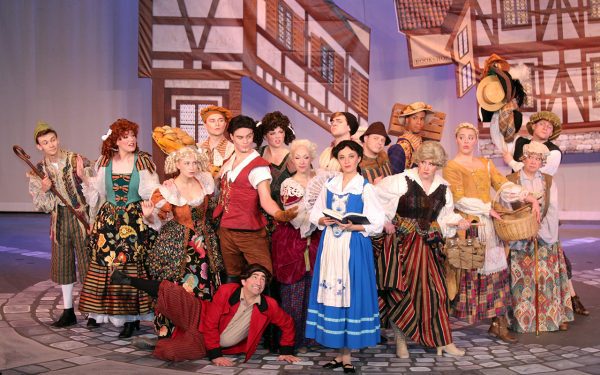 I very highly recommend this show. I found Circa’s “Beauty And The Beast” to be absolutely enchanting, wonderfully staged and directed, brilliantly acted, and incredibly compelling in large part due to those factors. The set pieces and costumes are fantastic and director Shane Hall’s blocking is wonderful in creating swirling tableaux upon the stage. Scenic designer David Goldstein, costumer Barb Portinga and music director Ron May all deserve major kudos for absolutely brilliant work as well.

Belle is the most crucial casting in this show, and Savannah Bay Strandin is terrific. Immensely talented and charming, her vocals are wonderfully smooth and her creation of the character brings the audience in and captivates them. This is one of the best acting performances you’ll see on a local stage all year, particularly in a musical production.

Kyle Defauw is also brilliant as the Beast, using his body contortions and gestures to morph and transform and to capture the feelings of this strange and tragic character.

Another crucial casting is that of the antagonist Gaston. He’s got to be a jerk, but not too much of a jerk, and he’s got to be funny in a vain and over-the-top narcissistic way. Joe Collins is pitch perfect in his boots, giving him just enough of a mix of smarm to dislike him but just enough stupidity to discount him as a comedic foil and keep the airy mood of the show. 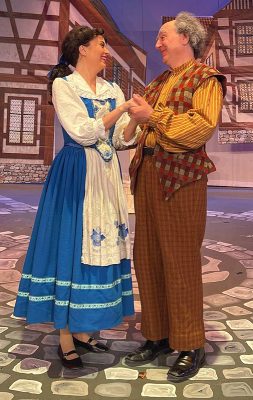 Bobby Becher has been great in everything I’ve seen him in at Circa, and his stint as Lumiere is no different here. Shelley Walljasper is delightful as Mrs. Potts. Tristan Layne Tapscott, brandishing a truly epic mustache, is broadly hilarious as Cogsworth. Thomas Besler is slithery and funny as the cuckish LeFou. Elsa Besler is sexy and bold as Madame De La Grande Bouche. And Ashley Becher (Babette), Tom Walljasper (Maurice) and Jack Carslake/Marley Haley (Chip) are all excellent.

The production is so good and so enjoyable that I really can’t think of any notable flaws in it, and if you love Disney, if you love “Beauty and the Beast,” well immediately call Circa at (309) 786-7733, ext. 2 to get your tickets, because I can’t recommend this more highly.

Of course, the story itself is kind of facile and ridiculous. A Prince (naturally) is cursed by a witch because he’s vain and narcissistic and is turned into a hairy beast who can only get back to being human if he finds a woman to truly love and who truly loves him. For some reason, the witch, living up to her name, also curses all of the employees in his castle, who turn into clocks, teacups, dressers and other pieces of furniture. Let’s not dig too deeply into the injustice and psychological damage surrounding that, especially for a completely innocent child, but, it is what it is. At any rate, none of them are going to be able to revert back to human unless the beast gets someone to swipe right on him, and vice versa, and the expiration date for that deal is nigh, so time is of the essence. 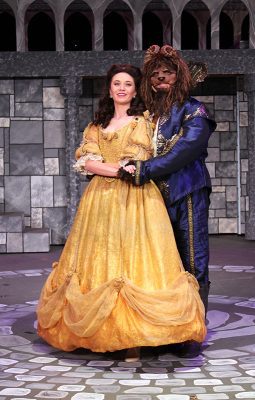 The strangest prom photo ever.

Thankfully for the beast (and more importantly for all the innocent people turned into furniture by that psychotic witch), a beautiful and smart woman, Belle, gets lost in the forest looking for her kooky Dad, Maurice, and ends up at his castle. Bada bing, bada boom, the beast exchanges her captivity for the freedom of her father, and she’s stuck at the castle. Because, ya know, match.com would’ve been too much work. And then, it being Disney, she ignores the fact that he’s her captor and kind of a jagoff, and through a little bit of charm and a lot of Stockholm Syndrome, they fall in love.

There’s my sourness towards Disney coming through there. See what I mean? So, again, consider the source here. That’s how I feel about the material. And I’m here praising this show to high heaven despite my intrinsic dislike for the actual material. Imagine how much you will love this show if you actually LIKE the material.

“Beauty and the Beast” is immensely charming and a must-see. Get your tickets now.