Richmond Hill Players Suspends Its 2021 Season Due to Covid

On Friday, Feb. 5, the Geneseo-based Richmond Hill Players announced it will temporarily suspend the 2021 season due to the ongoing Covid-19 pandemic.

“We will continue to monitor the situation, and when it is safe to return to our theater, we will make a final determination on the 2021 season,” RHP president Jonathan Grafft posted on the theater’s Facebook page and website,  www.rhplayers.com.

The theater – which began in 1968 in the top level of an old dairy barn – had scheduled “Becky’s New Car” for the first 2020 show that April, 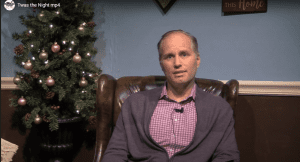 Richmond Hill Players board president Jonathan Grafft, in the theater’s “Twas the Night Before Christmas” video.

and canceled its entire 2020 season due to the Covid pandemic.

“Ultimately, I’m still optimistic there will be something in 2021, but what we didn’t want to do was just keeping slicing off the front end,” Grafft said Friday. “When we see a green light, we’ll likely do some portion of our 2021 season, but we reserve the right to shuffle the shows.”

This year was expected to open April 29 with the comedy-mystery “Clue” (based on the classic board game), and that may be moved to the fall, the board president said, noting they decided to postpone the season last weekend.

“I think we are the first, but don’t think we’ll be the last,” Grafft said of other Q=C theaters. Last month, Quad City Music Guild announced it was again canceling its spring 2021 show, “The Secret Garden,” which had been canceled first in March 2020.

“The complications with the theater in the round, our general theater configuration doesn’t allow us to manage social distancing very well,” Grafft said of RHP’s Barn Theatre. “We calculated what it takes to break even. It doesn’t make sense to even do a third weekend; it just isn’t worth it.”

“It’s just easier to wait until we can really be open,” he said. “The costs of us putting in hand sanitizers, etc. There’s a lot of ancillary decisions; for us, it just made sense not to try.”

The planned Richmond Hill 2021 season was to be:

RHP did a special streamed version of the five-minute “Twas The Night Christmas” in December, in which about 20 people were filmed (mostly) individually. You can watch it HERE.

“We very cautiously did it, with social distancing,” Grafft said, noting streaming a full play with no in-person audience is another tricky ball of wax.

“I would rather, personally, do nothing than something poorly,” he said. He was scheduled to direct “Vintage Hitchcock” last year, and it 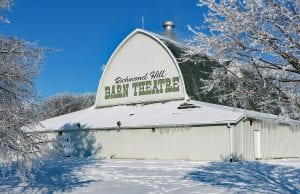 might be suitable for streaming, with a cast of six that could be reduced to four.

“It’s probably the best fit for streaming,” Grafft said. “As far as the best option, the amount of work for that, and would we get enough tickets sold? It’s been discussed and we haven’t completely ruled it out, but it’s not what we do.

“Live theater and recorded theater are two different skill sets,” he said. “It requires the technology and the editing to do it well. There’s just a lot to it. We as a community theater have to be thoughtful of, is it worth it?”

RHP knows that other local theaters have streamed shows and cabarets – including Music Guild, which plans to do one in the spring. But doing that with a musical revue (one or two performers at a time) is easier than with a play, Grafft said.

“It’s been a rough year to be involved in board administration,” he said, noting The late board president (and RHP institution) John VanDeWoestyne died March 25, 2020 at age 66, and he did everything for the theater. He was involved in over 80 RHP shows as actor or director.

“We’re fortunate we live in a town that supports us,” Grafft said of Geneseo, and the theater being in a city park. “It’s still no fun to lose a season.”