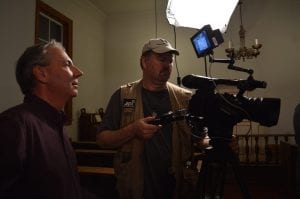 It was a THUNDEROUS night at the Iowa Motion Picture Awards, as Kelly and Tammy Rundle’s film, “Sons And Daughters of Thunder” took seven big wins out of eight nominations!

“Congratulations, to those who shined in front of the camera; to our tireless crew and volunteers behind the camera; to our historic sites; to our 50+ extras; to our contributors and our supporters who made it all possible; to Kent Hawley who always believed; and to Earlene Hawley who created a beautiful play about this little known true story and laid the foundation for the film. Thank you, EVERYONE, who gave so much to THUNDER!” Tammy posted on her Facebook, adding, “Congratulations (to Kelly) on the Award of Excellence from the IMPA for Director of “Sons & Daughters of Thunder” AND the Award of Achievement for Editing. You truly earned it!”

More information on the awards is coming soon on your site for local entertainment and features, QuadCities.com!