QC HIVE Takes Some Sting Out Of Coronavirus

Davenport — Like many of his fellow musicians who are airing videos on Facebook and working to raise money during the Covid-19 pandemic, Don Gustafson is using the social-media platform for good.

In response to the coronavirus, which has closed bars and restaurants, and put musicians out of work, Gustofson launched the Facebook group QC HIVE on March 23, and now it’s got over 3,300 members. Every day, he picks a local musician or business and asks people to donate at least $1 and share the post. 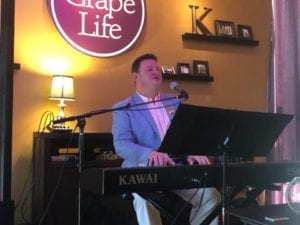 “There are people out there I know personally who have no income. That’s where the idea came from,” he said recently. “It’s such a giving community here, if we had enough people collecting for one person or one business a day, we could reach out a helping hand and pull them up.”

Gustofson chose the name “Hive” because thousands of bees work toward one goal. . “Imagine if all those bees, and we selected one worker bee and for a day, everyone helped that bee,” he said.

“So many artists and musicians are affected by this, I decided to open it up to bars and restaurants as well,” he said, noting his public gigs are off indefinitely. “My initial thoughts were for fellow musicians, but it looks like this extended shutdown, it’s gonna go for a long time. I’m terrified that places I perform at, or my friends perform at; restaurants we like to go eat at, they might not make it and they may be closed or out of business by the time everything clears up again.”

For Allen (a jazz pianist and singer), Sean Vogler, owner of Olde Towne Roofing, posted March 26 and said for every “Like,” he’d donate a dollar, and he ended up giving $900.

“This kind and caring human being gave me $900 to help with my bills and living expenses. Along with that and all of the kind and caring folks that donated on QC Hive, I have almost $1,400 for my living expenses and bills this month. Please like QC Hive and give $1.00 to the selected musician or small business of each day. I am beyond humbled and grateful. When the quarantine is over, stop in and say hi to Sean at Olde Town Roofing in Moline. He’s one of the nicest guys. From the bottom of my heart, thank you Sean and thank you QC Hive and everyone that donated yesterday.”

“It’s just amazing how much people are willing to help other people,” Gustofson said, adding he’s received so many nominations of worthy people and businesses. “In the music community, there’s a bit of a panic right now, and I just felt really helpless as to how I could help everyone.” 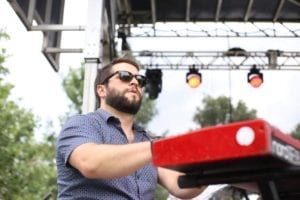 Ideally, he’d like to get a bigger percentage of HIVE members to donate $1 a day, and get enough donations to help both a business and individual every day. “It’s a really scary time,” he said. Some people donate up to $50. “People, if they know the business or individual, are inspired to donate a little bit more, which is fantastic.”

Monday’s recipient was The Diner at Davenport’s Freight House. “They’re wonderful people,” Gustofson said, noting they opened just before last spring’s record flood, had to be closed. “They’ve had a rough start. there are so many places that have a similar story like that.” Unlike many restaurants, The Diner is not doing takeout at this time and is just closed.

A Rock Island native, Doak met Gustofson while they attended Alleman High School. She spent 18 years working at the University of Amsterdam, in the infectious diseases and epidemiology department (very relevant today), and they married there two years ago, moving back to the Quad-Cities 18 months ago.

“There was a big sense of community, and I was always amazed at how everyone could switch languages mid-conversation,” he said of the internationally diverse faculty in Amsterdam. “It was great, just a strong sense of community. And you could see that people from all over the world, they want the same things.”

As Covid-19 is a global pandemic, Gustofson wants to encourage donations to HIVE from as wide a world as possible.

“The concept is, what if we had a few thousand people who could afford a dollar, donate a dollar?” he asked. “Imagine one musician, his bills are paid; a cook or bartender, or a business, I can pay my employees even though they’re not working. Together, we are many, and we can help one.”