Like many American children, Dean and Deb Mathias learned to ride bikes at an early age. Unlike most, however, the couple has cultivated that rite of passage into an enduring passion—one that has introduced them to lifelong friends, been shared with multiple family generations, taken them all over the globe, and guided them to give back to their community. Today, Deb and Dean are two of the biggest champions of bicycling and recreation in the Quad Cities. Deb is secretary of the Quad Cities Bicycle Club, while Dean sits on multiple local committees, advocating for projects that enhance the region’s bikeability and walkability.

The couple recently partnered with the Quad Cities Community Foundation to establish the Deb and Dean Mathias Endowment for Bicycle and Pedestrian-friendly Communities. To be fully funded by a gift from the couple’s estate after their lifetimes, the fund will provide grants for multi-use paved recreation trails and trail bridge infrastructure in the bi-state region.

“With their gift, Dean and Deb Mathias aren’t just promoting a cause close to their hearts—they’re making an investment that will benefit everyone in the community,” said Anne Calder, vice president of development at the Community Foundation. “There are so many ways people can give to make their community more cool and connected, just like Dean and Deb are doing with bicycling. It makes us all ask ourselves, ‘What can I do to make my community better?’” 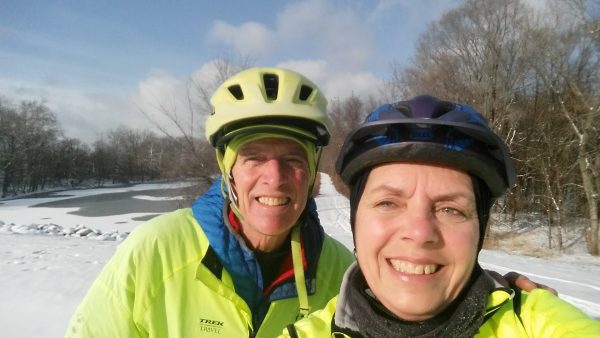 For Deb and Dean, the many bike-friendly trails and routes crisscrossing the Quad Cities Metro Area Bicycle Map are evidence that the Quad Cities has made strides when it comes to bicycle and pedestrian recreation.

“It’s on an upswing—it’s becoming more accessible,” said Dean, pointing out that the 14-foot wide bike and pedestrian path soon to be unveiled on the recently opened I-74 bridge is a major achievement. “It’s going to elevate consciousness about biking and pedestrian accommodations and connectivity throughout the Quad Cities.” Major routes passing through the Quad Cities include the Mississippi River Trail, running north-south, and the American Discovery Trail, running east-west.

Still, when Deb and Dean sat down to review their will with their attorney, they realized they had an opportunity to help fill the remaining gaps as local groups across the region—particularly smaller outlying communities—continue developing their corners of the wider network of routes, trails, and paths. According to Dean, it’s not a lack of desire that slows new projects down; it’s a lack of funding. “There are communities that are shining right now because they have higher revenues,” he said, “and there are communities that could benefit from funds like ours.” 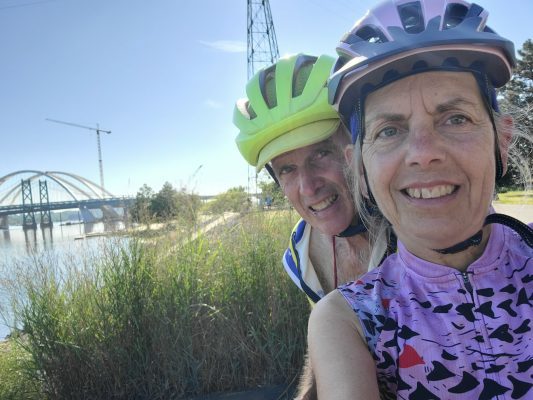 With government support stretched increasingly thin, Deb sees private-public partnerships as vital tools for achieving community goals. At the same time, she explained, when communities do secure grants, they often have to meet a match with local funds. “These are the kinds of things we hope our fund can help with.”

While the couple can list off each connectivity gap they’d like to see filled all across the region, their bigger-picture goals for their fund are to improve safety and accessibility for bikers and pedestrians alike, to provide more options for bicycle commuters, to promote recreational activities families can enjoy together, and to further the Quad Cities as a world-class destination for visitors. Above all, they want to give back to the community they were both born and raised in—and to do so in a way that has special meaning to them.

Like riding a bike, generosity is something once learned, never forgotten. For those who are seeking a way to use their generosity to transform the region, Deb and Dean recommend exploring the Community Foundation. 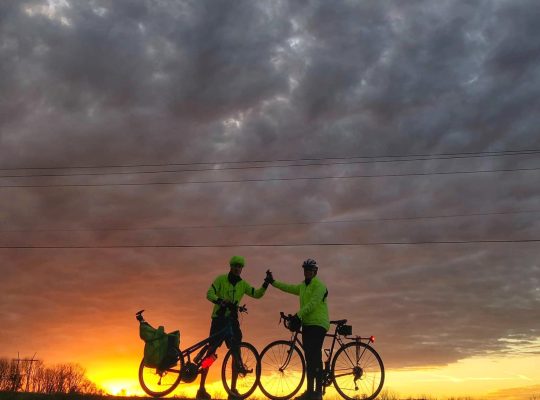 “Sometimes you have an idea, but you don’t really have it honed and focused,” Dean said. “That’s what they helped us do.”

“You may also find an already established fund that you can contribute to without creating your own,” added Deb.

And for anyone interested in exploring the bicycle recreation that the community has to offer, Dean’s advice is simple. “Just get out and ride the trails, introduce others to the joy, wear a helmet and have lights,” he said. “And bring food for you and somebody else you may cross paths with along the way.” 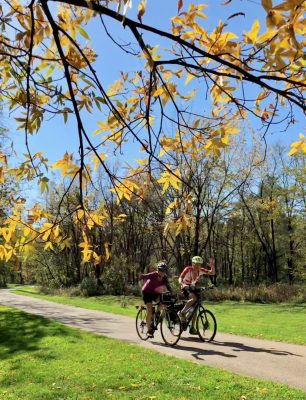 Sean Leary
Sean Leary is an author, director, artist, musician, producer and entrepreneur who has been writing professionally since debuting at age 11 in the pages of the Comics Buyers Guide. An honors graduate of the University of Southern California masters program, he has written over 50 books including the best-sellers The Arimathean, Every Number is Lucky to Someone and We Are All Characters.
See More Articles From Sean Leary
Advertisement
Tagged: anne calderdean mathiasdeb mathiasmoline bike pathquad cities bike trailsQuad Cities Community Foundation