The unveiling of a new mural in Downtown Rock Island, inspired by a Rock Island High School student’s award-winning artwork, will serve as the official kickoff to this year’s Alternating Currents Festival Aug. 19-22 in the Quad-Cities.

What: Ceremony unveiling the mural by young artist Riley Jones, a Rocky junior. 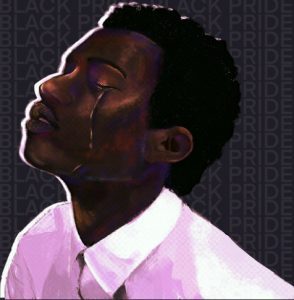 Riley Jones’ new mural in downtown Rock Island is based on her award-winning painting, “Black Pride.”

Created by 16-year-old Riley Jones in collaboration with professional muralists Dana Harrison (Limone) & Brandon Warner (ASPHATE), the new mural is an adaptation of Jones’s artwork originally titled “Black Pride.” A winner of the 2021 Congressional Art Competition, the original piece was selected by U.S. Rep. Cheri Bustos to be displayed at the U.S. Capitol this summer.

The ceremony will feature music by DJ Cat Dady, a spoken word performance by Aubs & Wes Julien as well as a few words from Rep. Bustos and other guests.

Riley Jones is now a junior at Rock Island High School. Her artwork, originally titled “Black Pride,” was competitively selected by U.S. Rep. Cheri Bustos to be displayed at the U.S. Capitol this summer. Her new mural in downtown Rock Island is an adaptation of her winning piece. Riley is the daughter of Jerry and Kathy Jones of Rock Island.

Dana Harrison (Limone) is a Jefferson, Iowa, resident, who started writing graffiti in 1996 in his hometown of Fort Dodge, Iowa. Dana studied under the late Sazko from Hamburg, Germany. With almost 25 years of mural experience, Dana’s murals can be found on the Market House in Iowa City, and in Des Moines at the Edna Griffin building, the 10th Street bridge, Platinum Kutz, and two University Ave. transit shelters. Dana is a member of the nationally recognized Scarce Elementz Crew, a graffiti-based muralist crew, founded and based out of Southern California and Arizona.

Brandon Warner (ASPHATE) is a Des Moines native, a graffiti artist and member of the nationally recognized Scarce Elementz Mural Crew. ASPHATE has created murals in Des Moines, Ankeny, Phoenix, Denver and other cities. ASPHATE is also a hip hop artist who has been associated with Maxilla Blue, an American hip hop trio formed in 2006 and based out of Des Moines.