For the first time in 11 years, the Dixieland jazz of the 1920s will be part of Bix 7 race weekend, with a new music festival – The Heights of the Era, all day Saturday, July 24, in Davenport. 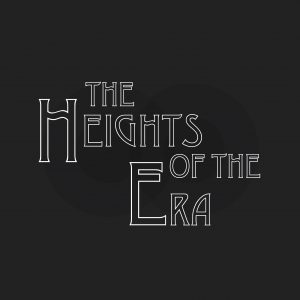 The first Heights of the Era music festival will be free, all day Saturday, July 24.

A longtime runner in the annual seven-mile road race (canceled in 2020 due to Covid), she said the event heyday was back in the ‘80s and “the Bix was very much a music fest with those two things together,” Russell said. “With those things separated, I think it’s been to the detriment of both — that it’s not together still. So I think we have really missed the music being a part of that weekend.” 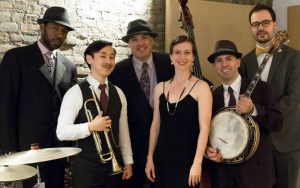 Creswell Club is a New York City jazz band that specializes in the 1920s era, and is based in Bix’s last home neighborhood of Sunnyside, Queens.

hometown of Davenport, to help keep alive the memory and musical accomplishments of native son Bix (1903-1931), the legendary cornetist, pianist and composer.

The catalyst for the Bix Society came in 1971 when Bill Donahoe’s, Bix Beiderbecke Memorial Band of New Jersey traveled to Davenport to visit Bix’s boyhood home, sites where he’d played, and to pay musical tribute over his grave in Oakdale Memorial Park.

They also played a jam session at the then Davenport Holiday Inn. Hundreds overflowed the jam session site. Davenport musician Don O’Dette and others were so impressed with the turnout that they soon formed the non-profit Bix Society, with O’Dette as its first president. Today, the Bix Jazz Festival is known worldwide, and has attracted many celebrity performers and jazz buffs of all ages.

The Bix 7 race began in 1975 and until 2011, the two events were held on the same weekend, with the jazz fest based in LeClaire Park.

2011 was the first year the jazz fest was separated into its own weekend, in part to create more tourism opportunities for the Q-C area (since people come from around the world for the race and jazz), and to honor the anniversary of Bix’s death date, on Aug. 6. 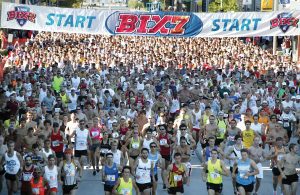 The crowded start to the Bix 7 road race, which begins up Brady Street hill.

This year, the festival will be Aug. 5-7 at Davenport’s Rhythm City Casino Event Center. Russell (who’s married to Russell president/CEO Jim Russell) emphasized Wednesday that the new event is not meant to replace the venerable Bix jazz fest.

“Our event is a long warmup for what they’re doing two weeks later,” she said. “But I think that the Bix weekend was and should be the biggest weekend of our community, and it has been in the past, and people used to schedule their family reunions around the state. And I mean, this was it.”

With the Bix 7, there is a “great morning of stuff but you know, there’s kind of a disconnect to what do you do for the rest of the day,” she said. “What we’re doing with the ‘Heights of the Era’ is all-inclusive and it’s very family-friendly. So, you know, there’s a playground right there at the park, and in the Village, like, literally steps away and there’s tons of pubs and eateries and shopping to do, and you can come and go. And so, I think Jim and I are big believers in, there’s totally enough to go around.”

The Heights of the Era will start with the race at 8 a.m., presenting 14 ½ hours of live music in the genres of 1910s – 1920s Dixieland; “O Brother Where Art Thou” style Bluegrass; Traditional Irish, Barbershop Quartet, and a cappella.

The Heights of the Era organizers have assembled a best-in-the-country lineup of musicians from New York, Cincinnati, Minneapolis, Milwaukee, and Chicago, Russell said. Among features of the free event:

·       Barbershop quartet music begins at 8 a.m. on the Bix 7 race course (at Jersey Ridge and Kirkwood, and another at the turnaround at McClellan Boulevard), and moves to the Main Stage in Lindsay Park at 9:30 a.m., where brunch will be served free until noon to the tunes of vintage swing jazz.

·       Live music continues all day on the main stage. The lineup can be found on the event website, TheHeightsoftheEra.com. The headlining performer will feature a 10-piece orchestra at 9 p.m. 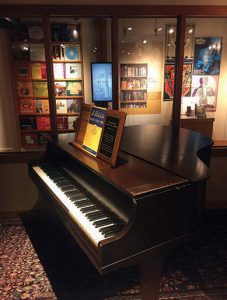 Bix’s 1931 piano, from his Queens., N.Y., apartment, is at the Bix Museum on the lower level of River Music Experience, Davenport.

·       Flapper Girl dance performances will be on stage during the day, as well as Flappers posing for pics with guests at a park photo gallery.

·       The Heights of the Era is a BYO event – meaning “Bring Your Own” lawn chairs, lawn blankets, picnic baskets full of food, coolers full of beverages (adult beverage is allowed).

·       For those who do not want to lug a chair, cooler, or picnic basket, folks will also have the option to pre-purchase “all-in fast passes” (likely for $50 or $100), which will have a butler from MyButler Concierge Service waiting with a chair for them and to serve up free food all day. Details can be found on the event website. 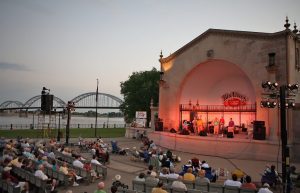 LeClaire Park was the longtime home for the Bix Beiderbecke Memorial Jazz Festival, which split from the Bix race weekend in 2011.

“We at the Bix Jazz Society, like other entities in the Quad-City region, are thrilled at the popularity of Bix 7 race and wish the organizers continued success,” Bix Society president Steve Trainor said Wednesday. “Society Board members years ago decided it was best for the annual jazz festival to be on the weekend closest to Aug. 6th, the date of Bix’s passing vs. the 4th 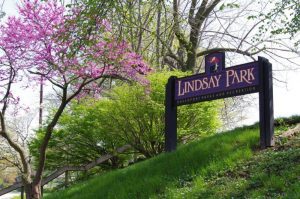 Lindsay Park, in the Village of East Davenport, will host the main stage for the festival.

Saturday in July when the race is run.

“Two, our festival garners more attention and attendance (imperative to our own future) when we’re not competing with the publicity for and crowds of the race,” he said. “Three, while many of us miss the LeClaire Park ambiance, our core fans didn’t like the heat, humidity, bugs, rain, trains, and flooding that caused logistical nightmares.

“Security at the park was costly, as was the liquor license,” Trainor said. “In 2014 when we moved indoors (at that time, the RiverCenter), the rain blew horizontal

down 3rd Street, and with it would have been what little profit we made. Being indoors at the Rhythm City Casino affords us the air conditioning people prefer,

a reliable location with free parking, and a food and drink support staff.”

The importance of giving back

The Heights of the Era serves as a gift to the community, and to further the community missions of non-profits WVIK Quad Cities NPR, and River Music Experience, Russell said. 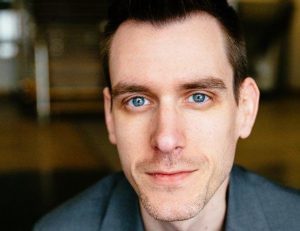 “The River Music Experience is thrilled to be part of this community music festival,” RME executive director Tyson Danner said Wednesday. “Bix Beiderbecke is a huge part of the Quad-Cities’ musical heritage, and we’re delighted to be part of bringing more music to the Bix 7 weekend.

“Creating community-oriented musical experiences is core to our mission at RME. This is a perfect example of how music can play a role in building our cultural pride and making our community a better place to live,” he said.

“After a challenging year, we look forward to our music scene’s reawakening, because music is a powerful antidote for sorrow and stress,” Danner said. “Thanks to remarkably generous support from the event’s benefactors, this will be a blockbuster summer event that will bring music back to our community as we head into the new roaring ‘20s.”

“The number one thing was we really missed the music. Number two, seriously the soundtrack of our household is WVIK,” Russell said. “We 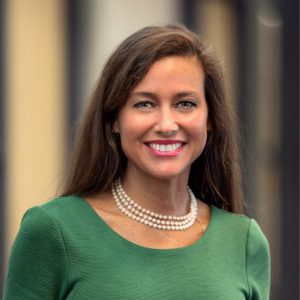 Michelle Russell is a partner in Russell Group and organizer for The Heights of the Era.

have real radios that you plug into the wall like in every room of our house and we have for years and years, where it’s just on.”

“We were listening to WVIK as we always do and we just, it was exceptionally good music and we were like, whoa, this is like really good. It was vintage jazz and turns out it was so striking to us,” she said, noting their son Sam recently joined the RME board, and they love Lindsay Park.

“So we were going to try a summer series of concerts. So we kind of started talking about that with VIK and RME, which within probably two days turned into, let’s do something bigger,” Russell recalled. “We really love our community and love Davenport. We love our neighborhood. We love the wider community.”

Russell as a company strongly supports volunteerism and giving back, she said.  “I am personally and professionally committed to giving back to our community. So really look at this, 2020 was really hard here and it was a year of loss for a lot of people and it was a year of stress for everybody,” Russell said. “So with where we are right now, we really look at it as a gift that we can play a big part of gifting to the community at least one full day of carefree, just nostalgic bliss.”

“WVIK is excited to be a part of this event,” station manager Jay Pearce said Wednesday. “We turned 40 last year and because of the pandemic, we didn’t have a chance to hold our usual annual open house — which would have been a special one in recognition of the 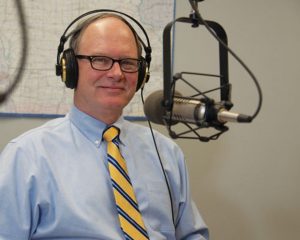 anniversary. Interacting with our listeners and supporters in person is important to us.

“This provides us an opportunity to do that, and on a much grander scale that we would be able to gear up on our own,” he said of the new event. “The live broadcast will give us the chance to celebrate our anniversary on the air. It will allow people with ties to the Quad-Cities to tune in and share in the celebration no matter where they are.

“And for those who just happen by it on air or online, it will let them experience what happens here when people, companies and non-profit organizations join together to stage an event that contributes to our quality of life,” Pearce said.

“What could be better than coming together, safely, to enjoy a day of great music with friends and neighbors in a beautiful setting?” he said. “Michelle, Jim, their family and company do an incredible amount to help make a difference in our community. This is yet another example. A fun, family-friendly celebration. 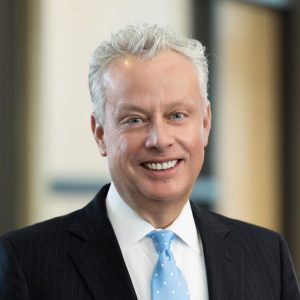 “And free of charge!” Pearce enthused. “I have said it before and I will say it again, in my experience the philanthropic community in the Quad-Cities is second to none.”

“They’re really, for me, that’s huge,” Michelle Russell said. “They really stepped up to the plate, and in a quick way. Every single person we asked, everyone said yes, and in a short time. We only started talking about this five weeks ago.”

One of the bands – New York City’s Cresswell Club, to play 7 p.m. to 8:30 p.m. – is a perfect fit, since they pay tribute to Bix Beiderbecke’s legacy, Russell said. They’re from Sunnyside, Queens, where Bix lived at the time of his death Aug. 6, 1931.

“They totally know all of these groups, like totally revere Bix Beiderbecke, they know them,” Russell said. “They studied them; they emulate them to a certain degree in in their music. And this particular group has a big, big fest on Bix’s birthday every year in Sunnyside.” She hopes the 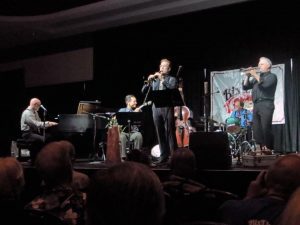 Performers at the last in-person Bix jazz festival, at Rhythm City Casino in 2019. The 2020 fest was held virtually.

event will become an annual fest with the race.

“I hope the community enjoys it and I hope it becomes a staple partnering event with the big summer race, like it like it used to be,” Russell said. “We’re happy to do that if everybody wants it.”

A special appearance by Bix Fest pioneer Bill Allred will also be part of the festivities. For more information on that fest, visit https://bixsociety.org/festival.php.