Wednesday was kind of a big day for Moline native Elisabeth Plunk and 58 of her musical colleagues in the “The President’s Own” United States Marine Band. The 41-year-old principal flutist – and Master Sergeant – played for her fifth U.S. presidential inauguration.

“The security takes a long time,” she said Wednesday afternoon.

The prestigious Marine Band – whose mission is to perform for the President of the United States and the Commandant of the Marine Corps – played an hour before the formal inaugural ceremony started, as well as during the festivities. 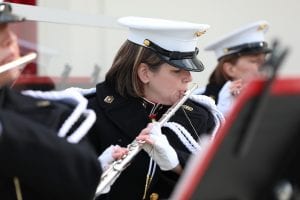 Plunk performing at the Wednesday inauguration for President Joe Biden.

“I think my favorite part of the ceremony is playing ‘Hail to the Chief,’” Plunk said. “It’s when the president takes the oath of office. It’s the first time he hears it and I think it’s very special the Marine Band does that.”

Accompanying Lady Gaga singing the National Anthem was a treat, she said.

“She was lovely, very appreciative,” Plunk said. “A very calm performer. She was absolutely lovely.”

Luckily, the morning was not too cold, in the 40s, and the flutist wore white gloves (with finger holes) as she played. When the oath of office took place at noon (ET), the sun was really shining, Plunk said.

“It’s definitely an honor to be part of the Marine Band,” the 16-year band veteran said. “There’s such history – even a day like today, we’ve been playing inaugurations for over 200 years,” she said. “It’s really awe-inspiring to think about.”

With the pandemic this year, Wednesday was really different, but it’s the band’s goal to not have it sound different, Plunk said. “To provide that soundtrack for the ceremony and to make sure that it felt the same to the public.”

“They are all unique,” she said of inaugurals. “President Obama’s first was especially unique because of the crowd size. There were really people from the Capitol all the way back to the Lincoln Memorial. It kind of looked like an ocean of people. That was sort of astonishing visually to see, but all the inaugurations are special and they’re all unique.”

President Biden’s ceremony was closed to the general public, with a sea of American flags on the National Mall where people would usually be.

“Obviously, we wish there could be people celebrating, but I thought the flags were a really moving tribute,” Plunk said.

With the extra security and pandemic this year made the inauguration historic in more ways than one.

“Covid has made it difficult for bands. We took a lot of precautions,” she said, noting there were Plexiglas shields that separated rows of the band. “We used 20 fewer musicians this year than we would usually use, and we were spaced farther apart.”

Beth Plunk began her musical instruction at age 6, first taking piano and then starting flute at 10, in her elementary school band. Her family 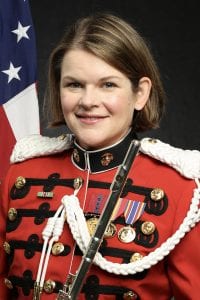 Beth Plunk, a 1997 graduate of Moline High School, has been a member of the United States Marine Band since 2004.

“I played for musicals at Moline High School. Probably my fondest memory is a bit of déjà vu – my high school band director took us on a trip to Washington, D.C., and we played on the steps of the Capitol,” she said.

That was Plunk’s first visit to the nation’s capital. “It was great,” she said. Plunk was in the Quad City Youth Symphony for three years in high school.

Prior to joining “The President’s Own,” Master Sgt. Plunk performed with the Opera Theatre of Pittsburgh and as guest principal flute with the Orquestra Sinfônica do Estado de São Paulo (São Paulo State Symphony Orchestra) in Brazil, for a few months.

Jumping at the chance to audition for a flute opening, Plunk joined the Marine Band in June 2004, was named assistant principal flute in 2009, co-principal in 2015 and principal in January 2020. There are six flutists in the band, and four played for the inauguration.

There are about 150 members total in the band, and typically they average 60 per performance, Plunk said.

“The President’s Own” United States Marine Band was founded in 1798 by an Act of Congress, and is America’s oldest continuously active professional musical organization. On March 4, 1801, Thomas Jefferson became the first to be sworn in as president in Washington, D.C., and it is believed that the Marine Band was present for this event.

An accomplished musician himself, Jefferson was an advocate for the band and is credited with giving the Marine Band its nickname “The President’s Own.” In 1809, the Commandant of the Marine Corps received a request to provide music to accompany the Volunteer Companies saluting the President on Inauguration Day. 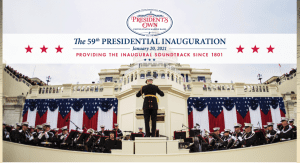 “The President’s Own” U.S. Marine Band has performed at every presidential inaugural since 1801.

Congress following the burning of the Capitol in 1814. This was the first outdoor inaugural ceremony in Washington, D.C.

Monroe’s second inaugural ceremony, in 1821, was held at the rebuilt U.S. Capitol. The Marine Band played music to accompany his arrival and at the conclusion of the ceremony.

The Marine Band heralded the arrival of John Quincy Adams in 1825 as he entered the House Chamber at the Capitol for his swearing-in. The National Intelligencer reported, “…the march of the troops, announced by the Band of the Marine Corps, was heard … and many a waving plume and graceful head within [the Chamber] beat time to the martial sounds.”

In 1829, the Portland Advertiser reported that prior to the arrival of the President-elect, the Marine Band “…played Jackson’s March, sweetly, as they always play; and music exhibited its usual empire, first in animating and then in stilling the crowd.”

During the ceremony, the band is positioned directly below the presidential podium at the U.S. Capitol.

Plunk recalled that President Obama’s historic 2009 inauguration was unique not only because of the first African-American president, but the arctic temperatures forced superstar guest musicians Yo-Yo Ma and Itzhak Perlman to mime to their pre-recorded piece.

“A cello will not stay in tune in sub-zero wind chill,” Plunk said. “Everything’s pre-recorded just in case it was like that Obama inauguration, if it’s very cold, especially when a string instrument would not be able to do that. There’s always a contingency plan.”

The band usually plays traditional American composers, and this year they added new pieces by contemporary composers, she said.

“There were three fanfares today, I think written specifically for this,” Plunk said Wednesday. “It’s very exciting to work with composers, to bring their vision from paper to the actual live sound, is always very exciting.”

She performs with the Marine Band and Marine Chamber Orchestra at the White House, in the D.C., metropolitan area, and across the country during the band’s annual concert tour. Plunk also has conducted training sessions at the Marine Corps Forces Reserve Band in New Orleans, the Marine Corps Air Ground Combat Center Band in California, and the Parris Island Marine Band.

The Marine Band’s last in-person concert was March 1, 2020. Since then, they held online broadcasts weekly April 8 through the end of May. In May, they did a “Stars and Stripes Together” project where thousands played along with the band virtually and then high school band members sent in videos of themselves playing and put together a collage video of that for July 4. 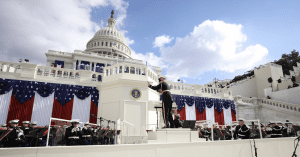 The band did a summer concert series, where virtual concerts were livestreamed from the band facility, including many different ensembles: brass quartet, brass quintet, saxophone quartet, country ensemble, Harmonie Musik ensemble, world music, and many other ensembles.

They had a virtual Fall Chamber Series in October/November and published a Veteran’s Day production/concert from the National Museum of the Marine Corps, and a virtual Holiday Sing-A-Along in December.

For rehearsals, they enhanced sanitization procedures and installed additional air filters. In addition, they reduced the amount of time we rehearse and added more breaks during rehearsals in an effort to allow aerosols to disperse. The musicians do not share music, stands or equipment.

“We definitely tried to provide as much virtual content as we could,” Plunk said. “We did a ton of educational outreach for schools across the United States, including a lot of videos, Zoom and Google Meet – everything from teaching instrument fundamentals to question and answer sessions.”

“The Marine Band plays outside, and we kept fulfilling our mission as we normally did. We spaced out, wore masks, and practiced social distancing.”

In a normal year, the Marine Band tours every fall (to 30 cities) and one of her favorite memories was coming to play at Davenport’s Adler Theatre in 2018. That was the first time she performed with the band in the Quad-Cities.

Plunk is married, with a 12-year-old daughter (who plays violin and piano) and almost two-year-old son.