Quad City Arts has wrapped up another round of exciting new projects in the annual Metro Arts youth apprenticeship program, and held a virtual showcase for 2021 on July 8.

The front of the completed mural in downtown Moline on the bike path.

Since the summer of 2000, Metro Arts has provided area youth 15-21 years old with paid summer apprenticeships in various arts disciplines. The program provides opportunities for youth and enhances the community through the arts.

For five weeks, area youth work together in groups to complete art projects under the supervision and mentorship of professional artists. Participants learn the artistic techniques and applications of their particular genre, while developing personally and professionally.

Throughout 2020, Quad City Arts was constantly evaluating our mission and how we were serving our community. Accessibility became a focal point due to the pandemic, forcing arts 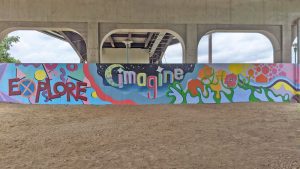 The back of the completed mural in downtown Moline on the bike path.

organizations to reevaluate how we were delivering programs.

“In recent years, Metro Arts has had an increase in requests for murals, which is great, but the mural program can be inaccessible to many students,” says Quad City Arts executive director Kevin Maynard. “Some students do not have access to arts classes in their schools and not all of them can afford private lessons.

“In 2021, we wanted to focus on programs that were designed from the ground up to be accessible to students who had no experience with the art form,” he says. With that in mind, Quad City Arts created the following programs:

Poetry (Lead Artist Aubrey Barnes). Apprentices learned how to write and present poetry, as well as its connection to hip-hop and pop culture. The final project will be multiple “pop-up poetry” events (basically an open-mic for the apprentices).

Film (Lead Artist Jonathon Burnett), with Senior Apprentice Cooper Harrison. Apprentices learned the concepts of writing a script, casting, filming, and editing. The final project will be a short film. 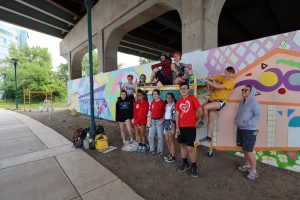 The Metro Arts apprentices who painted a new mural under the Arsenal bridge in downtown Moline.

Graphic Design (Lead Artist Annie Oldenburg), with Senior Apprentice Casey Rassmussen in a partnership with Black Hawk College. Apprentices learned the basic concepts of the Adobe Creative Cloud. The final project is a storefront vinyl project in Downtown Rock Island where apprentices created designs to go on windows of vacant storefronts. This will help draw attention to these great spaces.

Public Mural (Lead Artist Sarah Robb), with Senior Apprentice Liam Haskill, sponsored by Moline Centre. This mural is located along the bike path in Moline, under the Arsenal bridge, between the Channel Cat and Kone Centre. This area was in need of a new mural and Moline Centre/Geoff Manis asked Quad City Arts to make that happen.

This year may not be the most apprentices hired in a single year, with 45, but it was a big year for Metro Arts, Maynard says. Creating more programs that are accessible from day one is an important step to creating more young creatives in our community, according to the nonprofit.

“Metro Arts is a very important program for youth in the community,” says Oldenburg, an art and design instructor at Black Hawk College, in her first year with the program. “What a great opportunity to work with the younger generation and inspire art culture!” 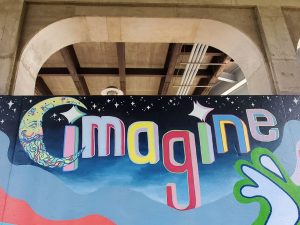 A detail from the new Moline mural, “Retro Electric.”

Working with eight graphic-design apprentices in Adobe Illustrator, her project created large-format posters that will be printed and hung in windows of empty commercial spaces in downtown Rock Island. These posters are the apprentice’s visions of what these spaces could be filled with.

“We brainstormed important concepts – like accessibility, diversity, etc. — and places that would help build and support members of our community,” Oldenburg says. “Some examples of the spaces being created are a smoothie bar, bookstore, community center, and art studio. These are both literal and abstract representations.”

“I have a talented bunch of apprentices, each with their own unique style that is really showing through,” she says.

Their finished product was a five-to-eight-minute short film — and each summer, he also leads the Urban Exposure Summer Independent 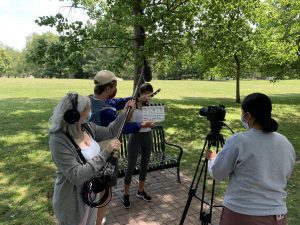 Film Program, which has been supported by Quad City Arts.

“I felt that working with Quad City Arts to help develop their own was a natural collaboration,” Burnett said. “Anytime I work with young filmmakers, I’m always excited about their growth. They come in knowing almost nothing but have great creative potential and are very aware of the world around them. But when they learn at least the basics of filmmaking, that gives them a new voice to express themselves through visual storytelling.”

Aubrey Barnes – a writer, poet, performer and founder of Roaring Rhetoric, a Q-C based open mic showcase – also took part in Metro Arts for the first time. He’s a teaching artist, and has been teaching poetry/spoken word for the last six years nationally and internationally.

“Quad City Arts decided to do this as a new program for the Metro Arts, and I thought it’d be a good program to do,” Barnes says, noting he’s most excited about giving “the students a platform to share their voice, and giving the community an opportunity to experience it.”

Sarah Robb of Davenport led a Metro Arts mural group for her 15th summer – this year with 10 apprentices total. They are painting a new 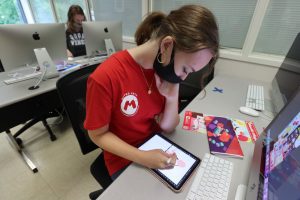 mural under the Arsenal Bridge along the bike path in Moline. Its title is “Retro Electric,” which is a nod to the history of the Arsenal infused with ‘80s shapes and colors, she says.

“I am most excited about the location this year!” Robb says. “Lots of people frequent the bike path and we are surrounded by the beauty of the river.”

Liz Nolte, the new Renew Moline operations and communications manager, posted a photo on Facebook July 9 of several geese gathering at the mural.

“Everyone is ‘flocking’ to see Retro Electric!” she wrote, noting the colorful mural’s title. “So fun 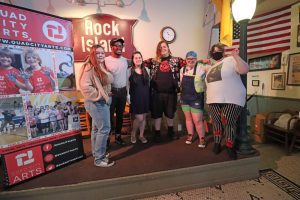 to be a part of amazing public art projects like this in Moline.” The mural group also painted the length of both sides of the wall under the bridge and also found time to paint a swan inside the Visit Quad Cities offices at 1601 River Drive, Moline.

“That stemmed from the design plans for the Moline mural, presented to Visit Quad Cities, Renew Moline and Moline Centre,” Maynard says of the initial three designs. One was the swan art, representing the spirit animal for the Sauk tribe that used to live on Arsenal Island.

“The Moline mural crew was a well-oiled machine,” he said Tuesday. “:They honestly moved so quickly on that (mural) project that they had a little extra time. They were going to add the Visit 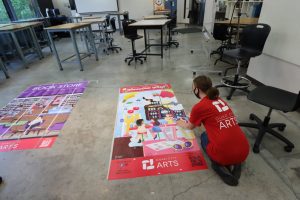 Quad Cities mural a week after, but they were able to get it done in the same time. It was incredible how quickly that team moved just to get things done.” 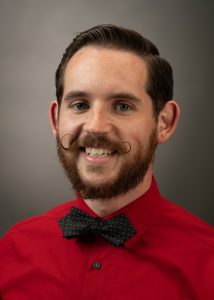 Maynard also is excited about a recently completed mural project that Robb led as a unique spring 2021 Metro Arts.

Apprentices were asked to design and paint new murals on the 2nd and 3rd floor just off of the elevators of the new TBK Bank building in downtown Bettendorf, at 1521 Grant St.

“Quad City Arts is thrilled to have the arts prominently represented at the new TBK Bank building and thankful to have a community partner like TBK Bank that understands the value of the arts and providing opportunities to our local youth,” Maynard says.

There were 14 local apprentices, chosen in the same way as the annual summer Metro Arts program. Robb was the lead artist and supervisor of the high-school students who created the TBK Bank murals in May, finishing June 2. The new bank (and TBK Midwest division headquarters) opened June 21.

Jonathan Turner
Jonathan Turner has been covering the Quad-Cities arts scene for 25 years, first as a reporter with the Dispatch and Rock Island Argus, and then as a reporter with the Quad City Times. Jonathan is also an accomplished actor and musician who has been seen frequently on local theater stages, including the Bucktown Revue and Black Box Theatre.
See More Articles From Jonathan Turner
Advertisement
Tagged: kevin maynardliz nolteMetro ArtsMoline CentreQuad City Artsrenew molinesarah robbvisit quad cities