The Plumbers and Pipefitters Local Union 25 in Rock Island regularly encourages apprentices to “Be Your Best Self.” In the union, it’s more than a slogan — it’s a way of doing business. And one plumbing apprentice in particular is living up to the motto. 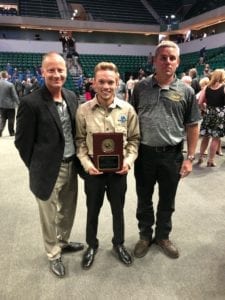 Carter Hagen, fifth-year plumbing apprentice, recently gained international attention during the United Association’s annual International Apprentice Contest in Ann Arbor, Michigan. Hagen competed against 32 of the top apprentices from across the United States, Canada and Australia to become the plumbing division champion, marking the first time a Local Union 25 apprentice has won the prestigious honor since the 1960s.

“Carter is an incredibly talented guy, but he was also up against some of the best people in his field,” said Chuck McKnight, Local 25 training coordinator. “He was constantly at the training center talking to instructors and working on his technique. He really went above and beyond to succeed, and we’re extremely proud of his efforts.”

Prior to winning international recognition, Hagen first competed in local and regional competitions. It all started with the 2019 Illinois State Apprentice Contest in March hosted by Local Union 25. After placing first in the plumbing division, Hagen moved on to claim the top spot in plumbing once again during June’s United Association District 4 Apprentice Competition at St. Paul Pipefitters Local 455.

“If you don’t say yes in life, you’ll never get to experience fun things,” Hagen said. “When I got the opportunity to compete, I told myself I’d have fun. I never thought I’d make it past Illinois, and I never thought I’d make it past districts. In this competition, the quality of competitors was so high that it was kind of a guessing game as to who was going to win.”

During the week-long competition, apprentices completed a number of projects and tests, including: an 8-hour written/drawing test, 4-hour copper project, 4-hour Aquatherm project, and a final 16-hour project that involved roughing in a toilet, urinal, lavatory and water heater. All projects were based on exceptional technique and precision.

Apprentices also met with a panel of judges for an in-person interview. They discussed everything from their goals in life, to the qualities of a great leader, to the future of the union. Each year, the contestant who demonstrates outstanding leadership and exemplifies the UA principles as defined by the association’s Standard of Excellence is chosen to receive the Allyn Parmenter and George Bliss Training Directors Award. This year, Hagen was the recipient.

The recent recognition has been a humbling, but worthwhile, experience for the newly-minted International Apprentice Contest winner.

“Whatever you do — whether it’s plumbing, a job, a hobby — put forth as much effort as you can. The more time and effort you put into something, the more reward you’ll get from it,” he said. “Big thanks go to Chuck, Matt, Craig and all the instructors at Local 25. Without their help and knowledge I don’t know that I would have done as well as I did. It was a wonderful experience.”

Local Union 25 is currently accepting applications for the 2020 apprentice program. For more information on a career in the skilled trades or to apply, visit www.lu25.org.