L.A. Guns
L.A. Guns never looked like the pretty poster boys that so many of their peers did, but more the band that you would be terrified to bump into in an alley as they would likely be carrying switchblades and ready for a fight. But despite having many songs to back up that image, the band could also write powerful ballads (see the smash hit, “The Ballad Of Jayne” for Exhibit A of this argument) that showed there were some serious songwriting chops in the band. Those chops are on full display on the band’s two most recent studio albums and the upcoming new album, “Checkered Past,” arguably one of the most vital and exciting releases in the band’s catalog. 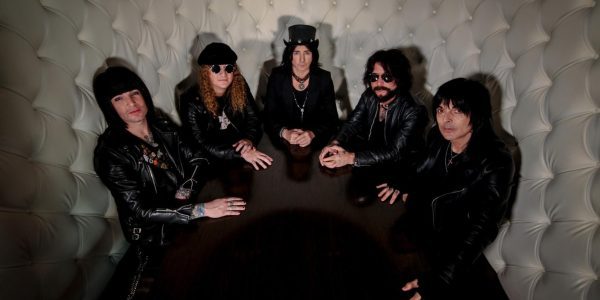 L.A. Guns was formed in 1983 by guitar player Tracii Guns and, then unknown singer, Axl Rose on lead vocals. The Classic Lineup of Guns, former Girl singer Phil Lewis, Steve, Kelly & Mick, have sold 6 1/2 million records, including 1988’s L.A. Guns and 1990’s Cocked and Loaded, both of which were certified Gold. Cocked and Loaded contained the hit single “Ballad of Jayne” that went to #33 on Billboard’s Hot 100 and #25 on the Mainstream Rock charts.

Following their successful performance at SiriusXM’s HairNation Festival in May of 2016, L.A. Guns went into the studio to record the critically acclaimed, The Missing Peace, the highest selling release for Frontiers Music in 2017. Their 12th release, The Devil You Know, released 2019 to the same critical acclaim. Their new album Checkered Past was released in November 2021.
Since reuniting, Tracii and Phil continue to tour around the world with L.A. Guns which includes Shane Fitzgibbon (drums), Johnny Martin (bass) and Ace Von Johnson (guitar).

Faster Pussycat
Faster Pussycat rose from the depths of the mid-‘80s Hollywood rock scene, taking the Sunset Strip by storm with a sound that wasn’t glam and wasn’t punk, but blistered somewhere in between. With an attitude and swagger all its own, their self-titled debut featured the instant classics “Babylon,” “Bathroom Wall,” “Cathouse” and “Don’t Change That Song,” and its follow-up ‘Wake Me When It’s Over’ climbed even higher with the radio hit “House Of Pain,” “Poison Ivy” and “Where There’s A Whip There’s A Way.”

Despite their successes, Faster defied the mainstream mold and always followed front man Taime Downe’s underground sensibilities. The gold and platinum records are nice, but Taime considers his greatest accomplishment to be longevity. “The only number that really matters to me is the number 35. Three and half decades later, Faster Pussycat are still rocking, and it feels as fresh as it did in 1986.” Look no further than their 2021 releases “Nola” and the Johnny Thunders cover “Pirate Love” – Faster Pussycat are as virile and tenacious as ever… and won’t have it any other way.