Echo: How did you get started promoting shows in the Quad Cities? 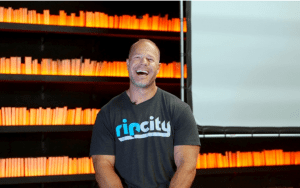 Daiquiri Factory, the business I built there. I was around a lot of talented people that could help me out and get things going.

E: What show or event are you most proud of in your career as a promoter?

K: It’s kind of twofold for me. The first thing is in 2007 I got lucky and we booked Buck Cherry, right off of “15”, one of their hottest albums they ever had. That kind of – for me – took Rock the District to the next level. That is always going to be there for me. Some of the most unique shows that I’ve ever done though at Rock the District was Chevelle in 2014 and Bush in 2018. Those are ones that from load in a load out the event went off perfectly. The weather was great. The crowd was great. The performers were great. Those are the days that are hard to duplicate every time, but it happens it’s really special and you know you know when you got something really cool going.

E: Are there any shows here at the Rust Belt that you’re excited about?

K: As far as what’s coming through the pipeline, the 3 Doors Down show (coming up Sept. 10). It’s the first time they’re playing their first album in its entirety from the beginning and all the hits. That’s a big tour that’s coming through that we’re one of the only independent venues on. I’m definitely looking forward to that one.

E: What are the special qualities of the Rust Belt?

K: It’s an old automobile manufacturing plant from the early 1900s. They made the Moline Knight. There is a lot of stuff here that I don’t think if you built today’s venue, you wouldn’t model something like this because we had to use the space that was already provided, which lends it hand to a really unique feel and some unique custom spots throughout. It is a standing room. We do, do some seating depending on the performer. It’s got a unique feel to it for both the artists and the consumer.

E: Where is the best place to stand in the Rust Belt?

K: Always for me whether I’m indoors or outdoors, at any show, is front of house. With all the talent the tour managers, the sound engineers, light engineers, that’s usually going to be the best spot. Through my experience, it seems like that’s always a good spot to be. Depending on what type of band is, if you want to come to see Sevendust and get your face melted off in the front row you can do that. If we’ve got a cool jam band and want to get up close and personal,  it’s great too. It really just depends on your own personal preference but for me personally as a promoter I like to be by front of house. That’s where you’ll find me.