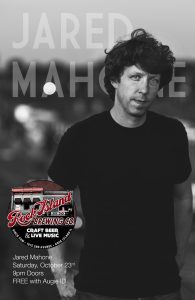 As a forerunner of the Midwest “garage soul” movement, Jared Mahone fills out singer/ songwriter tunes with dynamic and transparent live looping and a full band.
Jared Mahone has patiently turned hometown open mic night glory into a humble career as a nationally touring independent musician. His raw, acoustic songs and storytelling are inspired by Jared’s upbringing in a touring family band who fed his musical appetite with the writing of Bill Withers, Stevie Wonder, Paul Simon and Sting.
Despite regional recognition as the 2013 Verizon Indie Icon, national
recognition appearing as musical guest on Katie Couric’s short-lived ABC daytime talk show, or being named Best Male Artist in the 2014
International Acoustic Music Awards, Jared dismisses fame chasing. Instead, he has favored a troubadour-style trudge across the country for the past 16 years as a professional performer meeting new supporters one handshake at a time.