REVIEW: Haus of Ruckus’ ‘Jacques Alope’ Is A Hilariously Bizarre And Inventive Romp

I’ve always loved absurdist comedies. From the sketch comedies I’ve written and produced to stuff I watch over-and-over like “I Think You Should Leave” and “Mr. Show,” I’ve always gravitated towards humor that seems to continually come from the far reaches of the galaxy of the 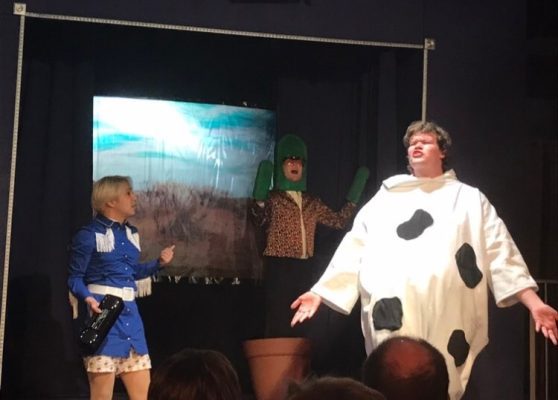 mind to offer unexpected laughs, and sometimes just complete and utter tangents into the bizarre.

It’s no surprise then, that I loved “Jacques Alope,” the new show from Haus of Ruckus, playing at 7:34 p.m. (with doors open at 6:59 p.m.) Thursday through Saturday at Mockingbird on Main theater, 320 N. Main St. Davenport.

“Jacques” is incredibly strange and off-kilter, full of amazingly quirky and obscure tangents, and imbued with a volcanic energy and creative spark. The vibe from it is akin to a dadaist Harold and Kumar, and the infectious likeability and goofiness of the random characters and situations tromps throughout the show like a happy puppy, bringing an ebullient charm to a weird, ramshackle play of strange tangents and even stranger people. It’s attacked with such glee and abandon that it’s almost impossible not to smile at its charm, and laugh at its hilarious audacity. 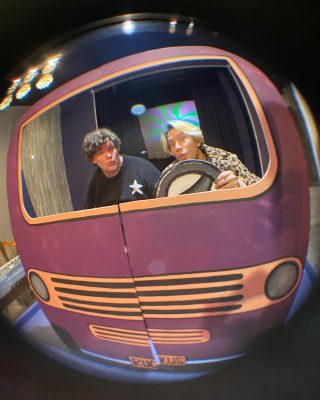 forces and ostensible stars of the show. They’re in pretty much every scene, and that’s a good thing, since both have such a fun, likeable aura to them that it’s impossible not to root for them regardless of whatever awkward and meanderingly odd situation they may find themselves in. The show is basically a road trip shadowing them as they try to get to the Burning Man festival, break down in the desert, and go through a series of pitfalls and rabbit holes trying to find their way to the fest.

So, yes, basically it’s the loose plotline of the Harold and Kumar movies, swapping out White Castle for Burning Man.

And if you love those movies like I do, you’re going to love “Jacques Alope.”

In order to repair their car, the duo find themselves having to attempt to assassinate a killer jackalope eating the shins off of random people (in a funny nod to old movies like “Reefer Madness,” the jackalope lures people in with drugs and they find themselves dead soon after taking them), while mingling with a variety of freaks and weirdos, from Pop Shop (Max Robnett) and Mom Shop (Sarah Goodall), to a stony police officer (Isaac Smith), Flint Eastwood (Isaac Smith), Mr. Clean with hair (Isaac Smith), Death (Isaac Smith, again, hey, the guy is versatile), the puppet nacho Cool Rancher (David Weaver, who also plays the title character), and, most hilariously, a 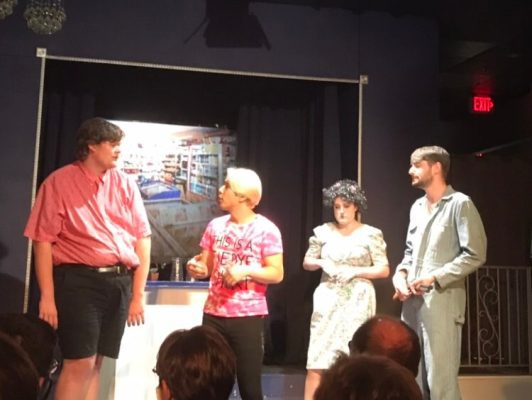 loud and flamboyant singing cactus (Joseph Lasher, who’s also got a short but memorable spot as a coked up Mayor).

The supporting cast pretty much perfectly captures the anarchy of the show, eating up the stage whenever they arrive, going for huge laughs with big, goofy performances. Smith is a versatile comedic actor going for the sly and laid back laughs. Weaver totally nails the ’80s wrestler vibe of Cool Rancher as well as the Triumph-like title character of the show, and with his oddball voices and intonations, he’s playful and amusing. Goodall delivers some great zingers and brings a nice sarcastic acidity to Mom Shop and especially to her Sarah in Props rant. And every time Lasher steps on stage as the brazenly over-the-top cactus, he pretty much steals the show with the force of his comedic personality.

At the center of all this lunacy are Green and Vo, who provide the perfect everyperson anchors for the show, both bemused and befuddled by what’s happening, but with a joyful shrug to go along for the ride in a Cheech and Chong sort of way. Both create their own personae which stand out, particularly Green with his breezy asides and a rolling fetish for being pricked by cactii. 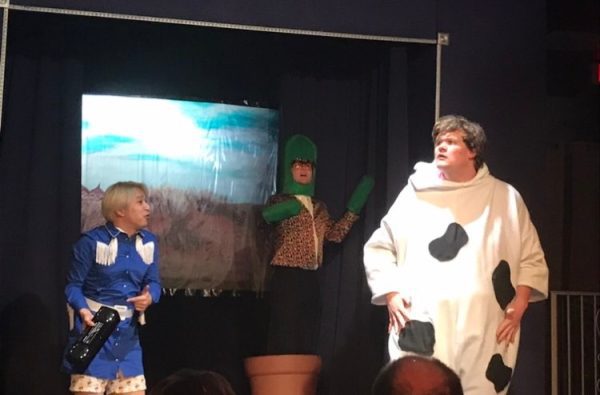 When all is said and done to wrap 2021, “Jacques” may go down as my favorite theater show of the year. I loved it that much. It’s rough at times, it’s not technically perfect, it’s got some frayed transitions that need to be smoothed over, and there are some moments where the pacing is a little off. But who gives a shit, honestly? Those are things these guys can work on, and will polish as they become more experienced. What’s more important to me is the inventiveness, the spark of creativity, the absolute joy for being on stage that I loved to see. I’d much, much, much rather see a show like this that takes chances, goes off in odd directions, and actually SURPRISES me than the most polished and slick version of some old glue horse like “Sound of Snooze-ic.”

If you’re into chaos humor and random comedy, if you’re a fan of films like the Cheech and Chong and Harold and Kumar flicks, or really if you’re just looking for something fun and new and energetic that’s going to bring you some laughs, I highly, highly recommend you see “Jacques Alope.” I eagerly look forward to the next show from Haus of Ruckus. These guys have got something really cool here, and I’m very much looking forward to seeing what emerges from the psychedelic corridors of their minds in the future.

Get your tickets here. This show is a must-see.

Sean Leary
Sean Leary is an author, director, artist, musician, producer and entrepreneur who has been writing professionally since debuting at age 11 in the pages of the Comics Buyers Guide. An honors graduate of the University of Southern California masters program, he has written over 50 books including the best-sellers The Arimathean, Every Number is Lucky to Someone and We Are All Characters.
See More Articles From Sean Leary
Advertisement
Tagged: Calvin Vodavid weaverhaus of ruckusHaus of Ruckus' 'Jacques Alope' Is A Hilariously Bizarre And Inventive Rompisaac smithjacques alopejoseph lashermax robnettsarah goodalltj green