And so, every Monday, we give you a music video. A fun, funny music video. Something that’ll make you smile, make you laugh, make you reminisce, and make you realize that back in the day, music video creators were probably either insane or heavily intoxicated. But were also incredibly entertaining.

We call this feature, The Video You Deserve, and you can find it every Monday on your site for fun, free entertainment and features, QuadCities.com.

For our latest video, we’ve chosen a very special song.

One which is particularly batsh*t crazy on every level.

It’s by a German one-hit-wonder named Taco who decided for some reason — witchcraft? cocaine? — that it would be a good idea, in 1983, to release an album of old classic depression-era hits in a cheesy electro synth pop style.

And, of course, because everyone was apparently drunk in the early ’80s, that album went on to be a big hit, generated a worldwide Top 10 smash with this unforgettable classic, “Puttin’ On The Ritz,” and forever made the name Taco synonymous with one-hit-wonder genius. 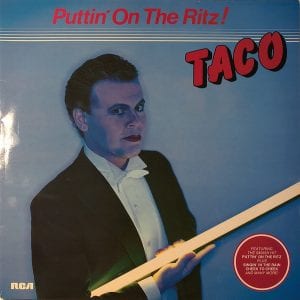 Now, the original video, which was justifiably banned in the U.S. (and ultimately worldwide) after only a few airings, featured robotic singing dudes in blackface, and so we’re not going to feature that. According to interviews with German-born-and-raised Taco at the time, he said he didn’t realize that was offensive and featured it because it was used during the era of the original Irving Berlin song, when it was also offensive. He did remove the footage in a subsequent edit after being educated that it wasn’t cool. Ok, Taco. You’re a freakin’ German dude named after a delicious Mexican food who looks like Tim Curry’s even stranger brother and became famous for robotic covers of Depression-era songs during the new wave era of British synth pop, so we’ll give you a pass that you weren’t exactly in tune with the times, or most other things on the planet earth for that matter.

At any rate, we’ll spare you that original video, and even the edited version, because this performance video really, truly captures the wonder and majesty of Taco, his hit song, and the Solid Gold dancer era.

Now, today, HERE is The Video You Deserve…