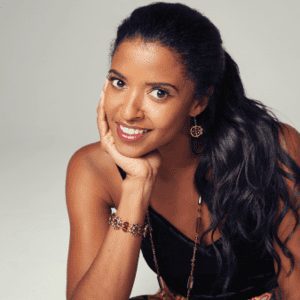 The QCSO pops concert with “Hamilton” co-star Renee Elise Goldsberry on May 15 has been moved to Davenport’s LeClaire Park.

The beautiful 50-year-old California native — best known for originating the role of Angelica Schuyler in the Broadway smash “Hamilton” – will make her post-Covid live performance debut in the 7:30 p.m. concert, for a long-awaited evening of Broadway, pop, and soul favorites, backed by the Quad City Symphony Orchestra.

“It’s kind of mind-blowing,” Goldsberry said in a Friday phone interview, noting her entire 2020 pops tour schedule was scrapped due to Covid. “I’m really excited because this — I just can’t believe this exists, this opportunity. This is my first one back.”

First announced in early February 2020, the program was originally scheduled for the Adler Theatre, but was moved outside at the longtime home of the QCSO’s Riverfront Pops concerts.

Under the direction of QCSO music director and conductor Mark Russell Smith, the May 15 event will feature Goldsberry’s band, three female backup singers and selections from Broadway hits including “Hamilton,” “Rent,” and “The Lion King,” plus songs by Aretha Franklin, Ella Fitzgerald, Bob Dylan, and more.