The following was originally published on Sean Leary’s blog, What The *&^^%* Is Sean Leary Thinking? on July 28, 1999. It details the local band Einstein’s Sister heading to Los Angeles to play at the International Pop Overthrow, a power pop festival featuring bands from around the world.

Einstein’s Sister will be going from a backyard bash to Beverly Hills 90210 this weekend.

After the local rock-pop group — made up of Kerry Tucker, Bill Douglas, Marty Reyhons, Steven Volk and Andrew Brock — plays at a Bix festival-related backyard show on Saturday, members will head down to Peoria, where they’ll hop on a plane to Los Angeles to perform Sunday at the International Pop Overthrow. The IPO, celebrating its second year, is an annual 12-day festival devoted to rock and power pop music featuring more than 150 bands from across the world. It’s held in the L.A. and Orange County area.

“I wanted to create an opportunity for pop bands from all over the world to be able to play showcases — that’s the germination of IPO,” said David Bash, the founder of the festival and a writer for Amplifier magazine. “We did the first one last year with 120-plus bands from around the world. As testimony of its success, this year we have 150-plus.”

How did Mr. Bash choose Einstein’s? 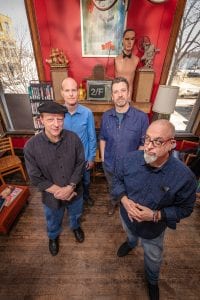 “I had been listening to their music for the past three years, and I think they have a very good sound,” he said. “Kerry and Bill write really great songs. Bill has that incredible Glenn Tilbrook vocal style that’s so catchy and so appealing. They write amazingly immediate, catchy pop songs, so I wanted them to be a part of the festival.”

The band was surprised and delighted with the invitation.

“We’re very thrilled to have been selected to be a part of it,” said Mr. Tucker. “It’s something we’re very, very proud of…to be playing a festival of this size.”

IPO is similar to the much-publicized South By Southwest Festival (SXSW) that draws hordes of fans, media and record company executives to Austin, Tx. every spring.

“One of our goals is to achieve the stature of SXSW,” said Mr. Bash. “But the ultimate goal is to get pop music where it rightfully belongs — in the hearts and minds of the mainstream.”

Quad-Cities group The Kabalas was invited to play SXSW fest in 1996 and came home brandishing a record deal with independent label Dionysus Records.

Given that all of the major labels — and many independent labels — have offices in Los Angeles, it’s likely that there will be reps from many companies at IPO, Mr. Bash said.

“As a result of last year’s festival, one band called Cloud 11 signed to Delphi Records, and another had a song appear in a `Fantasy Island’ episode,” Mr. Bash said. “This year we expect more major label attention. The word is more widespread than before and pop is becoming more popular.

“Pop music has a voice that demands to be heard, and we’re not going away.”

Sean Leary
Sean Leary is an author, director, artist, musician, producer and entrepreneur who has been writing professionally since debuting at age 11 in the pages of the Comics Buyers Guide. An honors graduate of the University of Southern California masters program, he has written over 50 books including the best-sellers The Arimathean, Every Number is Lucky to Someone and We Are All Characters.
See More Articles From Sean Leary
Advertisement
Tagged: andy brockBill Douglaseinstein's sisterkerry tuckerMarty Reyhonsquadcities bandssteven volk