Shallow Side Rocks Moline’s Rascals May 28

Here’s the lowdown:
$15 in advance (Tickets available at Rascals Music Pub or rascalslive.com)
$20 Day of Show 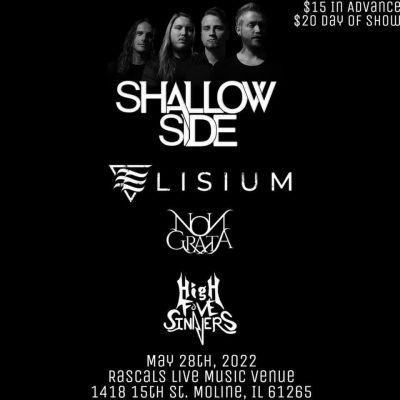 Shallow Side- A rock band through and through. Combining the driving rhythms that push the core of pop music with aggressive guitar work, carefully constructed bass passages, and a voice that smashes into focus atop the platform laid down by the music, Shallow Side has crafted a new sound with the same “no holds barred” attitude that has kept rock n roll alive and kicking since its inception. Shallow Side continues to push the envelope, providing a viable outlet for anyone looking for the future of hard rock.

Elisium- A 3-piece band from the Quad Cities. Their sound is a unique blend of dark rock, and modern metal. Most often compared to Tool and Chevelle, ELISIUM sounds huge for only being 3 guys. Vocalist/Guitarist Nate Compton, and brother Kirb Compton on bass hold down the harmonies with ease, while Nathan Thomas (called “Junior”) on drums keeps them in line.

Nongrata- Iowa City’s friendly, hard-driving active rock experience -the kind your mom might be nervous about meeting at first, even though she’d definitely tell you later that they were “all very polite, young men.”

High Five Sinners- a rock band from Clinton, IA. Formed in the fall of 2014 by guitar players Jake Mooney and Brady Sachsenmaier with Josh Foster on the drums and Jarrod Reuter on Bass. With influences from many genres High Five Sinners songs have a sound that is unique and new yet familiar. A classic approach to the shows, thumping bass and drums and screaming tube amps, if your a fan of Rock n’ Roll you’ll love High Five Sinners live.