This week, the “Juno” and “Umbrella Academy” star formerly known as Ellen Page made an announcement that they are transgender, want to heretofore be known as Elliot Page, and that their pronouns now are he/they.

I remember exactly where I was when I first read this.

Because it was only a couple days ago.

Upon reading this, I took a deep breath, had a drink of my iced coffee, flipped back over to my other window on my computer, and went back to work because I had things to do.

It never really struck me beyond that.

Sure, I really liked “Juno,” and I really like “Umbrella Academy.” The enjoyment of both had an impact on my life, however small and transient.

On the other hand, I had heard that Elliot had been gay, and that didn’t really have any impact on me either. The same way this doesn’t. It’s not like I’ve ever met Elliot Page, nor was I planning on hitting on them with any romantic intent. I’m not transgender. I’m not gay. So, really, this literally had pretty much zero impact on my life.

All I thought was, “Good for him/them. I hope they’re happy.”

Of course, that’s not the attitude of some people.

On the far right, predictably, we saw a trio of reactions – one was ridicule (paging Steven Crowder), the other was outrage about the politics of the left in regard to it, and the third was religious indignation because the biblical translation was mistakenly changed from pedophile to homosexual in 1946, and so some people think this is a sin, I guess? (Although this reaction of a conversion therapy victim was also trending, and sad.) 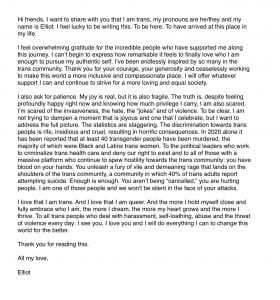 On the far left, which likewise excels at creating tempests in even the smallest teapots, Elliot was being attacked by lesbians and lesbian supporters because, I guess, by him transitioning into a him it somehow diminished his, formerly her, lesbianism? Is that right? I don’t know. I’m confused, and quite frankly, my dears, I don’t give a damn enough to figure it out.

Ya know, I’m trying to recall when this intense concern about everyone else’s life and business began. Certainly, gossip and celebrity fluff magazines have existed since there have been celebrities, but it’s really flared in the last decade or two as the internet has prospered.

Because quite frankly, I don’t think it should be anyone else’s business what someone does in their private life as long as it doesn’t impact anyone else.

If the former Ellen Page wants to be known as Elliot Page and be called by a different pronoun or seen as whatever sexuality they want, then why do you care? 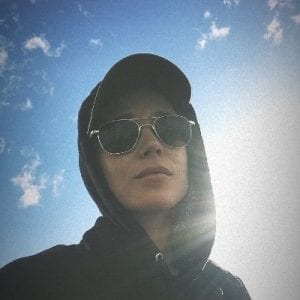 Elliot Page. Anyone ever tell you you look like Ellen Page? KIDDING! I keed! I keed!

I’ll bet probably 99 percent of the people writing about this, pro and con, myself included, HAVE NEVER MET ELLIOT PAGE AND THEY HAVE ABSOLUTELY NO DIRECT IMPACT UPON OUR LIVES WHATSOEVER.

For people to be getting so bent out of shape about this is FREAKING MORONIC.

Listen, I could give a flying f if someone wants to be called freakin’ F You Yankee Bluejeans and identify as a Berzerker if it has no bearing on my life or my son’s life, and no bearing on my business, health or financial situation.

Do what YOU want to do, and be who YOU want to be in order to pursue your own happiness. And I wish you well. Period. Do whatever you want as long as it doesn’t negatively impact on other people, especially me. Once it negatively impacts upon me, THEN it’s my business, and I’ll certainly have a response to it.

But until then, I don’t give a damn. You do you. Be happy. Live your life.

Pursue your own path, your own love, your own bliss. Because damn it, we’re only inhabiting this matrix for a short time, so let’s enjoy the ride.

And I think more people should follow that credo, and take that advice to heart in their own lives.

Because honestly, the more people that do THAT, that pursue happiness, that concentrate on their own lives and their own bliss, the better off this world IS going to be, and THAT is actually going to end up having a measurable ripple effect upon the rest of us.

So, good on ya, Elliot Page. I wish you happiness and love in your life, and I hope it translates into you continuing to make good work on the big and small screens.

But regardless of whether it does or not, I hope you personally have happiness in your life. And if anyone out there is inspired by you, or is made to feel less alone by you and your announcement, that’s fantastic. I wish the same for them as well. And, for that matter, I wish the same for all of you out there.

Except for Tom Brady.

To hell with that guy.