The Rust Belt in East Moline is beginning to knock off the rust, so to speak, in opening up to more live shows — and audiences are responding with enthusiasm.

Corey Taylor, the Slipknot frontman and Des Moines native, sold out the June 12 Rust Belt show within a day.

Tickets to see Corey Taylor in concert at East Moline’s Rust Belt in June were to go on sale this morning (March 19) to the general public. But the June 12 limited capacity show sold out within a day of opening in pre-sale Wednesday, and they’ve added a second date for the frontman of Grammy-winning juggernaut Slipknot and platinum rock force Stone Sour on Sunday, June 13. The artist management and venue are limiting both shows to 600 patrons (at $50 per person), below the 20-percent capacity maximum ordered by the state of Illinois.

“They went on sale March 17, to the internal fan club and I-Rock 93.5,” Rust Belt promoter Kyle Peters said Friday morning. “We’re working with management for the band and everybody’s trying to make sure – we’re still trying to be cautious, get things going. That’s why we added the second show; we brought attendance down, and Corey’s management team was good to go with two shows.

Taylor, a 47-year-old Des Moines native, is kicking off his indoor 2021 tour May 18 in Tempe, Ariz., and Peters said it wasn’t too tough to add 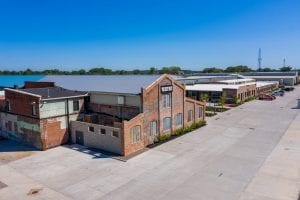 The Rust Belt (named for the area’s industrial heritage) opened at 533 12th Ave., East Moline, in a former warehouse.

“We could have just done the one, but we know we have lot of Corey Taylor, CMFT, Slipknot, Stone Sour fans in the Quad-Cities,” he said.

Taylor’s website (thecoreytaylor.com) shows that he’s taking Covid very seriously, noting: “Be advised that at these shows, regardless of State guidelines, Covid health protocols shall be strictly enforced by purchaser for all employees, patrons and artists throughout the event. 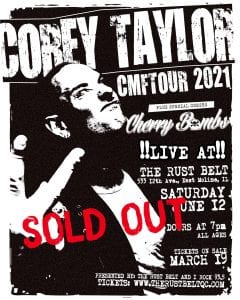 Corey Taylor, the Slipknot frontman and Des Moines native, sold out the June 12 Rust Belt show within a day.

when NOT in their pod or at their table/seat. There will be temperature checks at entry. Patrons included in each pod or table shall be required to enter venue together. Together we can stop Covid-19.”

At the Rust Belt, multiple entrances and exits will be used to discourage crowded waiting areas and social distancing will be strictly enforced during arrival and in lines for vendors and the restrooms.

Pods for patrons will be first come, first served and not assigned. Pods will be arranged for groups of 2-4 people, to maintain social distancing.

A Oct. 1, 2020 USA Today feature noted that as frontman of heavy metal band Slipknot for more than two decades, Taylor has performed in a wide array of the group’s signature, frequently terrifying masks. “Which is why the outspoken singer gets ticked off when he sees people refuse to wear face coverings to protect themselves and others from coronavirus,” the story said.

“If I can wear a mask for two, three hours a night, you can wear one for five, 10 minutes in the grocery store. Suck it up,” he says. “It’s tough 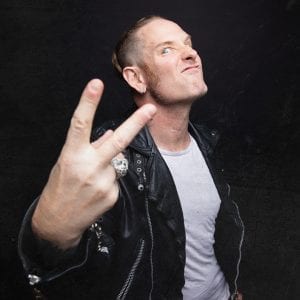 Corey Taylor has been with the bands Stonesour and Slipknot. He’s currently touring as a solo act.

for me to watch people being stupid and not say something. At the same time, the minute you say something, people accuse you of playing politics when it’s actually just common sense.”

Taylor, for his part, is completely unmasked on his debut solo album “CMFT” (the title is an explicit acronym for his name), released last fall. “The 13-track effort is a stark departure from the kind of songs he made with Slipknot or Stone Sour, the hard rock band he co-founded in 1992,” USA Today wrote.

In the interview, Taylor said: “With this, it’s a singular vision and one that I wasn’t completely ready to do until now because I was never confident enough. Hearing it back, it’s really made me hungry to do it again. It’s such an upbeat, energetic album. Sometimes being in that Slipknot frame of mind can really weigh you down. Especially if you have demons you need to purge, it’s the best vehicle for it. But that’s not me all the time, I’m not a brooding 20-year-old anymore. I’m a guy heading toward 50 who still just wants to make music and have fun.”

Taylor’s new album is “CMFT.” The C stands for Corey… the T for Taylor… and the MF… hmmm… hmmmm…

The heavy metal Slipknot formed in 1995 in Des Moines and has sold over 30 million albums worldwide.

With two gold-certified albums and a platinum single, Stone Sour have notched five Top 10 debuts on the “Billboard 200” and garnered Loudwire’s “Rock Album of the Decade” for “House of Gold & Bones — Part 1,” which also spawned its own Dark Horse Comics graphic novel of the same name by Taylor.

His debut solo effort, “CMFT,” last fall made history with the powerful single “Black Eyes Blue” reaching #1 at Active Rock Radio making Taylor the first artist in the history of the format to reach #1 with three separate projects, following chart-topping efforts from Slipknot and Stone Sour. 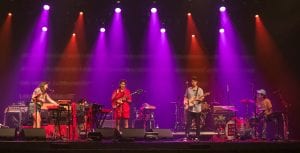 The Rust Belt hasn’t seen a live indoor show in more than a year, due to Covid.

Meanwhile, his filmography encompasses “Fear Clinic,” “Doctor Who,” “Officer Downe,” and “Sharknado 4.” Taylor’s bio calls him: “The rare renaissance man who can give a symposium at Oxford University and headline heavy music festivals around the globe, Taylor forever challenges culture to think, dream, and scream along with him.”

Being from Iowa, a lot of people in the area can relate to him, Peters said.

“We’re kind of cut from the same cloth, the same area,” he said. “It definitely doesn’t hurt. Everybody’s trying to get the cogs in the wheels to start turning. Everybody in the musician industry, we all understand that. It’s not a light switch, to get things going again. It’s been a long year without live music.”

Reopening to live public shows May 7

The Rust Belt will have its first 2021 live concert outside on May 7 at 7 p,m., with rock band Badflower and Goodbye June at River Bend Park (formerly known as Murphy Park), in front of the Hyatt hotel at The Bend. 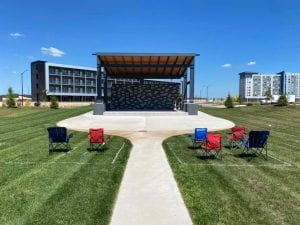 The River Bend Park at The Bend will host a Badflower concert on May 7.

Those tickets range from $30 to $50, and each pod (fitting up to six people) will be at least six feet from another. Guests should bring lawn chairs or blankets on the lawn. They’re asked to ensure that both the people in your group and items you bring can comfortably fit within the designated pod area. Aisles and space provided for required social distancing must be kept clear.

As with any Rust Belt event, attendees should be asymptomatic for at least 14 days prior to attending the event in person. Anyone feeling unwell or experiencing symptoms such as but not limited to fever, cough, or shortness of breath should stay home. Anyone who has been in contact with someone who has been experiencing these symptoms in the last two weeks should also stay home. 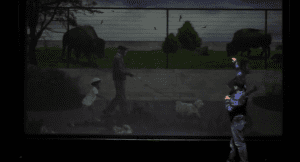 risks and have steps to mitigate them.”

“While there is no guarantee of an illness-free event, it is indisputable that planning, training, and implementing reasonable health and 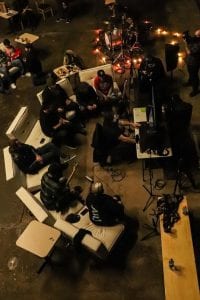 A Feb. 6 Instamix Live session at the Rust Belt.

safety measures are the best ways to protect this live event and the people who create it,” the site says.

The Rust Belt – which opened in February 2019 – has not been entirely dark the past few months.

They have hosted three “Instamix Live” sessions, coordinated by Jose Urquiza of the Q-C band 3 Years Hollow, where touring musicians come together to create a new song with the help of limited audience of 50 people maximum, Peters said.

The Saturday before the Super Bowl, the Rust Belt hosted members of Sevendust, CMFT and Breaking Benjamin, he said.

“We have a lot of cool lights and sound and they asked, can we do this?” Peters said. “These are little plugs we can do, those are huge — that bring in the talent we did. Jose does great job of recruiting talent like that, 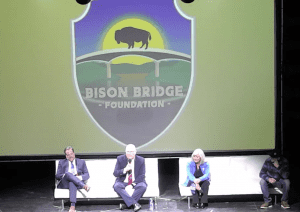 Speakers at the March 18 Bison Bridge event at the Rust Belt.

Last night (March 18), the venue was happy to host the big announcement by Chad Pregracke and his new Bison Bridge Foundation, which attracted over 80 business, state, and community leaders in attendance.

“I think it’s cool. Chad has a great vision, thinks big,” Peters said. “There’s few people that have that ability to think big and he’s one of them, to get the right influencers there. It’s gonna take something like that to help the Q-C area to pop and stand out. Hopefully, we’ll do what we can from our side.”

Like most live music venues across the country devastated by Covid, the Rust Belt is anxiously waiting federal relief – from the $15 billion approved by Congress in the “Save Our Stages” act in December. 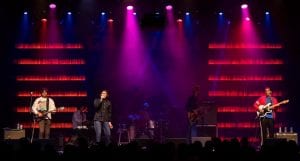 The East Moline venue will be seeking federal Covid relief, from the $15 billion approved for shuttered venue operator grants.

“We were notified that the portal was supposed to open the last week of April,” Peters said. “We’ve been patiently waiting — from December until April has been an eternity. We’ve got great ownership at the Rust Belt, management that understands.”

“In down times like this, when we’re not able to promote live music, we can do stuff for Chad, and people can see the venue through a different lens,” he said. “It helps capture a different audience, bring general awareness to the venue. It’s a unique venue with a lot of history. As we move through the pipeline, we’ll have a whole genre of stuff we can do there besides just music. We’re definitely open to other events. We’re patiently waiting for things to open up more, to open up the playbook.” 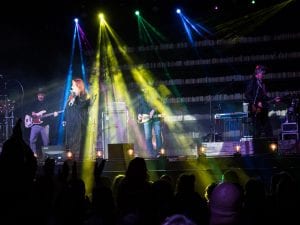 Wynonna Judd and the Big Noise with Monica Austin at The Rust Belt in February 2020.

Having some guests Thursday night who haven’t been to the venue before can help spread word of mouth, Peters said.

“Word of mouth is everything, to bring new people in,” he said. “Activity brings activity. It always has and always will. We’ve essentially had over a year of no larger audiences of over 50 people. We’re definitely excited to bring people through in a safe way, kind of get this momentum going for the venue.”

For the federal “Shuttered Venue Operators Grant” program, the entities eligible for Covid relief funding include: 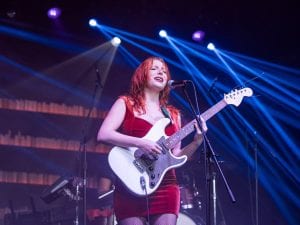 Heart Bones with Gully Boys at The Rust Belt in East Moline in February 2020.

Other requirements of note:

Grant amounts will reflect either of the following instances:

For more information on the grant program, visit www.sba.gov/funding-programs/loans/coronavirus-relief-options/shuttered-venue-operators-grant.