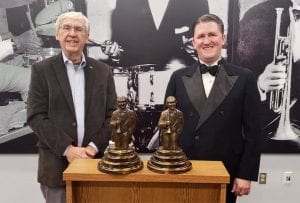 Congratulations to local musician Josh Duffee, who very deservedly won the Bix Lives Award this weekend! Josh has long been a huge supporter of the Bix fest and Beiderbecke’s legacy, as well as an accomplished jazz musician in his own right.
Josh posted news of the win on his facebook, where he said:
I am very honored to have received the Bix Lives Award this past Saturday, January 16th, at the RME. A congratulations is also in order for Carol Schaefer, the other recipient of the award.
I can’t believe it has been 20 years since I started my musical journey with my orchestra performing the music of the Gene Krupa Orchestra, and a few months later, the Jean Goldkette Orchestra. I was thinking of my dear friend Rich Johnson when I received this award, remembering when he received the first ever Bix Lives Award in 2007. I hope he’d be proud of all the work I’ve done here in the Quad Cities for Bix.
I also want to thank Vince Giordano, all the members of The New Wolverine Jazz Orchestra in Sydney, Australia, Mike and Patti Durham, Andy Schumm and His Gang, and all the musicians and teachers in the Quad City area who have supported my musical efforts with performing the music from the 20s, 30s and 40s, keeping Bix’s legacy alive!