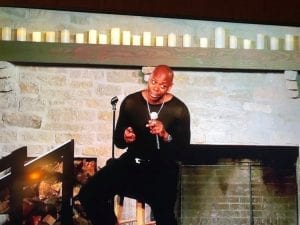 And that’s PART of what makes Chapelle’s surprise special on YouTube, aptly entitled 8:46 (after both the amount of time George Floyd was choked to death on film, and a surprising detail about Chappelle’s own life) so searing and necessary.

Like the movement itself and the 400+ years of oppression black humans have experienced, it is ragged and honest and brutal and unrefined. This dialogue Chappelle presents is something of this moment and something the world needs. It finds itself less stand up special and more super powerful one man show on the horrors society is uncovering about racial inequality and justice.

Running around 30 minutes, Chappelle — for the most part — does away with overt comedy and 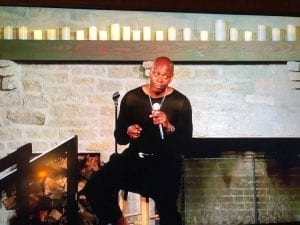 instead uses his platform to discuss the murder of George Floyd and the pent up chaos that ensued; takes shots on Don Lemon’s criticism of celebrity involvement — most notably saying “the streets talking for themselves”; recalls the murder of Eric Garner, among others as a wake up call that this isn’t new; takes shots at black conservative Candace Owens; notes that slavery wasn’t that long ago, and more.

Chappelle packs a serious punch and covers the aforementiond topics and more in short amount of time. But despite its brevity, it just may be a cultural moment we won’t soon forget. There’s something powerful about watching a professional storyteller this raw and candid talking about something in the now.

“Normally I wouldn’t show you something so unrefined,” he says several times throughout the special. “I hope you understand.”

We are with you.