The E-Lit competition, which is highly competitive, offers awards in 65 categories, solely to e-books, world-wide.

E-Lit awards are dedicated to honoring the best e-books published each year for the North American market and also from overseas publishers who publish English-language books designed for the American market. The E-Lit Awards designate a winner, finalists and honorable mentions in each category; these appear for one year at www.elitawards.com. 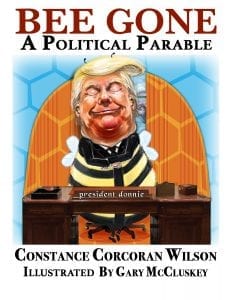 Winners are also featured in www.IndependentPublisher.com and highlighted prominently in the group’s monthly newsletter, which goes out to more than 20,000 subscribers, worldwide, including agents, buyers and librarians.
BEE GONE was an adult spin-off from Wilson’s 6-book children’s series, “The Christmas Cats Flee the Bee.” (www.TheXmasCats.com), which is also available from Amazon in e-book, paperback and hard cover versions.

With clever illustrations by Hallmark artist Gary McCluskey, the small book tells the story of a disgruntled drone in a bee hive (Donnie Drone), who doesn’t like the Queen Bee and wants to seize control of the hive. When Donnie Drone is successful in gaining power using questionable tactics, the results are chaotic: “So, the hive lost its honey, its Queen and its money. It was really a mess, and that isn’t funny.”
The book was released in August of 2019 in both paperback and e-book formats and can be read quickly. Its rhyming delivery of the story of Donnie Drone is cleverly illustrated with full-page color illustrations. Some lines from the book seem almost prophetic during this pandemic.
When Donnie Drone seizes power in  the hive and conditions worsen, this line occurs: “Oh, my!” said the other bees, after his rise. “This really is awful! Our whole hive might die!”
The story continues: “The Queen, who was out in the forest, alone, said, “You should’ve listened to me about this bad drone. But some of you didn’t and thought he was great. Just how will you feel when it’s really too late? If we don’t pull together and get this drone out, he’ll ruin us all—the big, crazy lout.”
BEE GONE is the adult version of “The Christmas Cats Flee the Bee,” last installment in Wilson’s 6-book Xmas Cats Christmas book series. Appended to the last quarter of the paperback is a section from Wilson’s coverage of the 2008 presidential race (“Obama’s Odyssey: The 2008 Race for the White House,” Vols. I & II), which notes that “The more things change, the more they stay the same,” highlighting problems still occurring, such as racial prejudice.

Sean Leary
Sean Leary is an author, director, artist, musician, producer and entrepreneur who has been writing professionally since debuting at age 11 in the pages of the Comics Buyers Guide. An honors graduate of the University of Southern California masters program, he has written over 50 books including the best-sellers The Arimathean, Every Number is Lucky to Someone and We Are All Characters.
See More Articles From Sean Leary
Advertisement
Tagged: bee gonebee gone: a political parableConnie Corcoran WilsonConnie Wilsonelit awardsgold medallocal authorslocal books