BREAKING: Illinois’ Southern Region Runs Out Of ICU Beds, Are More Covid Mandates On The Way? 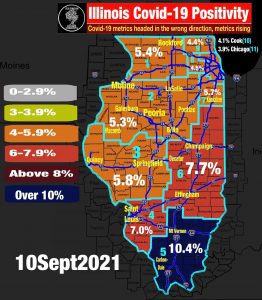 Illinois Medical Professionals Action Collaborative Team, known by its acronym IMPACT, released a statement Tuesday, describing it as “signaling a public health emergency of epic proportions” for the south region, which runs roughly from Mount Vernon to Illinois’ southern border and east to the Indiana line.

“This is not a ‘pandemic of the unvaccinated,’ but a pandemic that affects everyone as emergency and routine health care collapses for a region,” the group said in their statement.

The Southern area of Illinois has consistently been the hardest hit by the Delta variant spread, with some of the regions at or near the 12 percent infection threshold that typically would cause new mitigations to be put in place. The area is also the lowest vaccinated by percentage, with only 38 percent of its population vaccinated, according to IDPH statistics. Illinois as a whole has a percentage of 67 percent of its population vaccinated, according to the IDPH.

Overall in the state, positivity rates are decreasing but cases are much higher now compared to last year. Headed into the fall with an extremely high rate of cases could be catastrophic if numbers surge like last year as the weather gets colder.

Illinois is currently under a statewide indoor mask mandate, a vaccine mandate for all school employees in P-12 and all employees and students in higher education facilities statewide, and other restrictions.

However, Gov. JB Pritzker has repeatedly stated, and did so again this week in a press conference, that if numbers do not improve, more mitigations could be put in place.

“We are the most vaccinated state in the Midwest, however the numbers across the state are not consistent. In Southern and East Central Illinois less than half of residents are fully vaccinated as opposed to over 70 in Chicago and Cook County,” Pritzker said.

“We’re consistently looking at the menu of options that we may need to impose in order to bring down the numbers,” Pritzker said. “I will remind you that if we are not able to bring these numbers down, if hospitals continue to fill, if the hospital beds and ICUs get full like they are in Kentucky -that’s just next door to Illinois – if that happens, we’re going to have to impose significantly greater mitigations.

“We are living in a very dangerous moment of coronavirus, an upswing of the delta variant across the nation and here in Illinois,” he added. “I am deeply concerned especially that the delta variant is having an increasingly serious medical impact on younger people, not just young children who attend school, but older kids in high school and the young teachers who come to work at schools every day and so we’re trying simply to ask people to make sure that people are following a mitigation that we know works.”