BREAKING NEWS: Thousands of students and parents statewide in Illinois are defying Gov. JB Pritzker’s order for mask mandates in schools upon the announcement of Sangamon County Circuit Judge Raylene Grischow granting a request from downstate attorney Tom DeVore to temporarily halt the governor’s executive orders on masking and quarantining for schools.

The president of Awake Illinois, Shannon Adcock, a Naperville mother of three, and one of the plaintiffs in the lawsuit, went on social media to post of her elation over the verdict.

“We had a victory for liberty today, and the kids will finally be able to go to school mask-free,” Adcock said. “This is a legitimate due process ruling, and you’re going to see a lot of families pushing back now.”

Grischow’s bombshell ruling found that the measures taken by Gov. Pritzker to mandate masks are beyond the governor’s authority and deprive students of due process.

Many parents across the state, including in the Quad-Cities, shared this identical message from the activist group Awake Illinois in the wake of the ruling.

“The grave consequence of this misguided decision is that schools in these districts no longer have sufficient tools to keep students and staff safe while COVID-19 continues to threaten our communities — and this may force schools to go remote,” Pritzker said.

A group of parents had filed lawsuits downstate against more than 140 school districts statewide, as well as Gov. J.B. Pritzker and the Illinois State Board of Education last year, arguing there was no due process in Illinois’ statewide mask order. The case has been making its way through the courts and on Friday afternoon, Judge Grischow issued a ruling stating defendants are temporarily restrained from ordering school districts to require masks for students and teachers unless a quarantine order is issued by a local health department, and barring school districts, Gov. Pritzker and the Illinois State Board of Education from requiring unvaccinated individuals who work in Illinois schools to provide weekly negative results of a COVID-19 test or be vaccinated to enter a school building.

In addition, the order states that school districts can’t refuse admittance to teachers and students deemed a “close contact” of a probable COVID-19 case without due process of law. 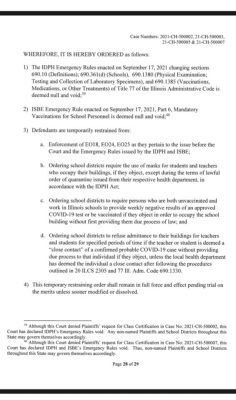 Many parents posted screenshots from the lawsuit on social media over the past 48 hours voicing their opinions in defiance of the school mask mandate.

However, also according to the ruling, collectively-bargained agreements such as those between unions and outside groups remain enforceable.

“This decision sends the message that all students do not have the same right to safely access schools and classrooms in Illinois, particularly if they have disabilities or other health concerns,” Raoul said in a statement.

Different school districts around the state have reacted in different ways, with some ignoring the ruling and continuing to mask up, others taking away the masks, and others talking about going to remote learning.

In the Quad-Cities, both Moline and Rock Island school districts said they will remain masked, going so far as to issue statements saying so.

However, many parents are defying that order, with dozens posting pictures on social media of their kids going to school maskless, and many posting the viral message from Awake Illinois. 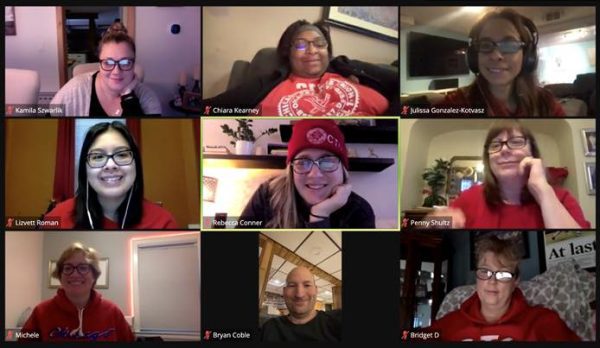 Various members of the Chicago Teachers Union logged into their remote classrooms this week as a sign of solidarity in wanting to move to remote learning to stop the rampant spread of covid among students and teachers.