BREAKING: Illinois covid-19 numbers exploded yesterday, almost doubling from the day before and posting the worst day for covid since Dec. 1, 2020, when 12,542 new cases of the virus were reported. As Illinois was getting the bad news, Gov. JB Pritzker reiterated that current restrictions are here to stay for the foreseeable future, and more restrictions could be coming as the state begins to see numbers hit the trigger markers for a potential shutdown.

The Illinois Department of Public Health reported 11,524 new confirmed and probable cases Thursday, based upon 231,876 tests conducted over the last 24 hours — the 11,524 marking an increase from just over 6,000 the day before.

There are now 2,537 people hospitalized for COVID-19 — the highest number since January 2021. In addition, numbers across Illinois have spiked upwards over the past two weeks, with some regions — including those around Chicago and in Southern Illinois — hitting benchmarks that have previously triggered shutdowns from the governor. 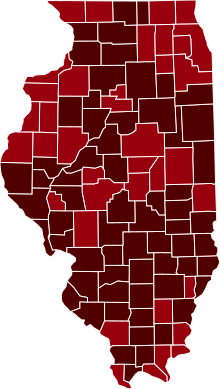 On top of that, the first Midwest case of the omicron COVID variant has been confirmed in Minnesota, the state’s health department confirmed Thursday. The first case in the United States, in San Francisco was just confirmed two days ago. Dr. Anthony Fauci told reporters at the White House on Wednesday. The person was a traveler who returned from South Africa on Nov. 22 and tested positive on Nov. 29.

Given all that information, Illinois Gov. JB Pritzker said Thursday that the current mitigations for the state — including the statewide mask mandate — would not be going away any time soon. He also once more did not rule out further mitigations and restrictions, and acknowledged that the infectious Omicron variant is probably already in Illinois.

“So, it’s unclear. Is Omicron attacking people who are unvaccinated more often than they are vaccinated people,” Pritzker said. “I believe that’s the case because that seems to be the case with everything about this disease. But we’ll have to see.” 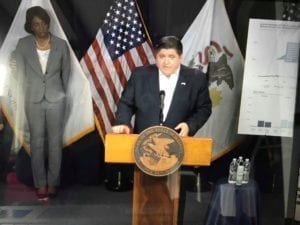 “We have an indoor mask requirement in the state of Illinois and so we’re not lifting that, especially now,” Pritzker said. “When I want to lift [the mandate] is when we start seeing hospitalizations plunge, considering that’s a particular problem.”

“I consult with hospital leaders frequently to determine what’s the situation in your hospital, do you have enough beds? What do you think will happen if we continue to have an increase? What are your plans? We’re always watching that to know is there something more we need to do,” Pritzker said.

Pritzker said most of the people hospitalized right now are unvaccinated, and said his administration would consider creating mass vaccination sites, given that the state is not facing a vaccine shortage as appointments are readily available. Pritzker noted a Chicago Tribune analysis said the surge is predominantly being felt by the unvaccinated. 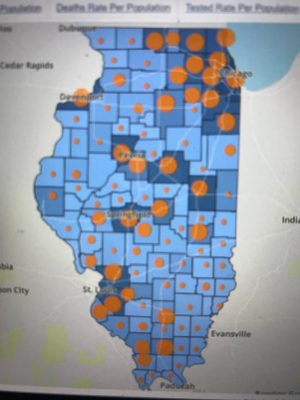 “We really don’t have a major limitation on supply right now,” Pritzker said. “Yes, it’s taking a little longer than you’d like to be able to do it today or tomorrow. And it might take a couple of days to get a booster. But, again, we don’t have a shortage in the state.”

As the numbers surge, so do the calls by some to enact even harsher mitigations statewide, with some even calling for another shutdown, particularly of schools. Some schools have already opted to shut down due to the surge, as one district near Chicago shut down its elementary schools for two weeks due to the massive surge. In the Quad-Cities, Edison Junior High in Rock Island was closed down due to rising covid cases. Near Peoria downstate, Princeville schools shut down all athletics due to spiking covid cases. In Cook County, which includes Chicago and its surrounding suburbs, health officials are urging the unvaccinated population to stay home for the holidays this month.

“While we are also reporting a record high number of tests across the entire pandemic, our test positivity rate is also high,” a spokesperson from the Illinois Department of Public Health said.  “Thanksgiving was one week ago, and we are starting to see cases associated with family gatherings and travel.”