BREAKING: 50th Bix Jazz Fest to be Live-Streamed for the First Time

BREAKING NEWS: The 50th anniversary of the Bix Beiderbecke Memorial Jazz Festival, Aug. 5-7, will be live-streamed for the first time. 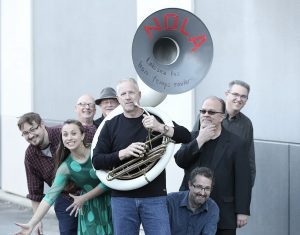 The NOLA Jazz Band from Des Moines will give a free pre-festival concert Saturday at RME Courtyard in downtown Davenport from 6 to 8 p.m.

There will be five 5-hour concerts over those three days – at Davenport’s Rhythm City Casino Event Center — and you can pay for one ($20 each) or all five through Eventbrite. This link (also on the Society’s website), https://www.eventbrite.com/e/bix-beiderbecke-50th-jazz-festival-tickets-164015884927, will easily walk you through the process.

This year, there will be eight professional bands plus the Bix Youth Band performing. The festival venue will include hand-sanitation stations, separate seating if you like, and masks will be available.

“In the first few years, the festival was rained out and board members had to take out second

The 50th-anniversary Bix jazz festival at Rhythm City Casino Event Center will be livestreamed for the first time.

mortgages to pay the bands and vendors,” Bix Society president Steve Trainor said in a Wednesday release. “Now we’re one of the top three longest-running music festivals in Iowa, and in the region. Fifty never looked so good! This is a three-day party you won’t want to miss.”

If you’d like to have a highlight video of this year’s festival on DVD or a thumb drive, it can be ordered now through the end of August (for $25) by calling or emailing the Bix Society office, buying it at the festival, or ordering on the Society’s website — www.bixsociety.org.

Finally, there will be a free concert this coming Saturday, July 31 at the RME courtyard at 2nd & Main, streets, downtown Davenport. The Bix Youth Band will play from 5:30 p.m. to 6 p.m., and the NOLA Jazz Band from Des Moines will play from 6 to 8 p.m.