Scott Beck and Bryan Woods are teaming up with Sam Raimi for an untitled science-fiction project, Variety reported today. The filmmakers, who grew up in Bettendorf, worked with Raimi on the Quibi series “50 States of Fright.” Beck and Woods handled the Iowa segment.

The original script is being kept secret, as per usual with Beck and Woods.

After more than two decades of working their way up and making countless films of their own in the Quad-Cities and elsewhere, the duo shot to fame as the screenwriters of “A Quiet Place.” Last year they continued their success with their directorial debut on the big screen, “Haunt,” which also starred local actor Justin Marxen. 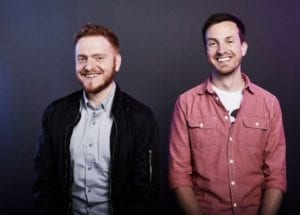 “Raimi Productions is proud to be teaming up with Scott Beck and Bryan Woods,” said Raimi in the Variety story. “They have exceeded all expectations in my experience with them at Quibi and we have the utmost confidence in their brilliant story. I am honored to once again be joining forces with our partners at Sony Pictures. We have a wild and thrilling blockbuster that we can’t wait to share with the world.”

“After ‘A Quiet Place’ we knew we had a responsibility to reinvest back into the ecosystem of original ideas,” said Beck and Woods in the Variety piece. “We are so proud to have partnered with a studio that believes in a theatrical landscape that looks for launching new stories. Our producing team at Raimi Productions helped foster our vision for this film as directors before we introduced the spec script to the town. Sam Raimi is not only one of our heroes, but one of the only filmmakers to successfully master both independent film and the studio blockbuster. We can’t imagine a more perfect mentor to help us transition into big studio filmmaking.”

For more information on Beck and Woods, check out QuadCities.com’s Spotlight on the duo.

Sean Leary
Sean Leary is an author, director, artist, musician, producer and entrepreneur who has been writing professionally since debuting at age 11 in the pages of the Comics Buyers Guide. An honors graduate of the University of Southern California masters program, he has written over 50 books including the best-sellers The Arimathean, Every Number is Lucky to Someone and We Are All Characters.
See More Articles From Sean Leary
Advertisement
Tagged: 50 shades of frightA Quiet PlaceBettendorfBluebox FilmsBryan WoodsHauntJustin Marxenlocal filmmakersSam RaimiScott Beck