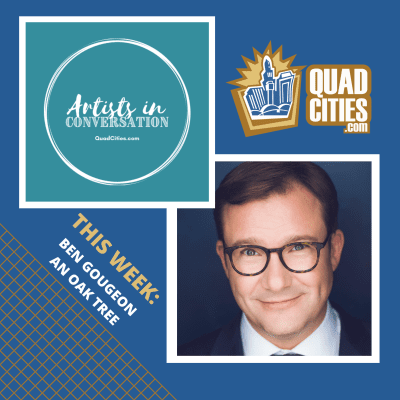 Ben Gougeon, a graduate of Western Illinois University’s MFA Acting program (2007), moved to the QCA in the fall of 2019. Before relocating back to the Midwest, he had spent the last decade plus working in New York City as an actor, having appeared on TV shows such as the Emmy Award winning The Marvelous Mrs. Maisel, Law & Order: SVU, The Blacklist, Bull, and HBO’s The Deuce, where he performed with Oscar nominated Maggie Gyllenhaal. He’s performed Off & Off-Off Broadway, at the Metropolitan Opera, and on stages in almost every state east of the Mississippi, and a couple west. He’s been in dozens of commercials, been on a billboard in Times Square, and danced in a diaper with Grammy and Oscar winner Jon Batiste from The Late Show with Stephen Colbert.

WHAT TOOK YOU SO LONG TO MAKE YOUR DEBUT HERE IN THE Quad Cities?

Max had been pestering me for a year to work on something with him, but the logistics of the pandemic and childcare for my little guy always posed a challenge. Yet when he brought me the script of An Oak Tree, I was immediately in.

First off, I’m fascinated by hypnosis; both stage hypnosis and hypnotherapy, and have participated in both. Plus logistically, with the concept of not having a consistent stage partner, I knew we could create a rehearsal schedule that worked around my family needs. And the more I read the play, and the more its complexities were revealed, the more I fell in love with the challenges it presented to the actor.

THIS PIECE SEEMS MULTILAYERED BEYOND THE RATHER UNIQUE YET SIMPLE PREMISE?

An Oak Tree is simultaneously working on multiple levels, and in essence I’m actually playing 3 different versions of The Hypnotist during the course of the show, though sometimes those versions blur together and the characters themselves aren’t sure what version they are.

IT IS AN INTRIGUING PIECE, ISN’T IT?

Crouch has written a beautifully nuanced piece about how we deal with grief, and like grief, it’s layered and messy and complex and has moments of profound sorrow and profound joy.

AND I ASSUME YOU CAN RELATE TO IT ON JUST AS MANY LEVELS?

The last few years of my life have brought both the most joyful and most sorrowful times I’ve experienced to this point, and I really connected to the themes and ideas An Oak Tree is exploring.

I CAN’T IMAGINE HOW TO PREPARE FOR SOMETHING LIKE THIS…

We’ve had some tremendous performers join us for rehearsals who’ve really helped us to shape the show: Alex McCarthy, Eric Teeter, Kiera Martin, and Katie Griswold. Their input has been invaluable as we’ve shaped the piece and tried to pull out all the specific moments of the show: the humor, the macabre, the heart. We couldn’t have done it without them.

WHY SHOULD LOCAL AUDIENCES GIVE THIS SHOW A CHANCE?

It’s the ultimate test of trust for an actor; stepping on stage with another performer that you’ve not worked with and just diving in. That’s not something you see all that often. There’s a saying that I try to live my life by: “Jump and the net will appear.” An Oak Tree is that sentiment personified.

AN OAK TREE plays The Mockingbird On Main through December 5. Performances will be held Friday and Saturday at 8pm and Sunday at 2pm and all tickets are $15. Details can tickets can be found by visiting TheMockingbirdOnMain.com.