Home › Columns › Sean Leary › If You’re Single And Looking For Company, Make Sure To Check Your Spam Folder

If You’re Single And Looking For Company, Make Sure To Check Your Spam Folder

We all have to deal with it some time or another.

No, this isn’t one of those patronizing Pocket articles trying to glamorize millenials being broke af and trying to polish that turd into a NEW LIFESTYLE CHOICE (see: TINY HOUSES! THRIFT STORES ARE BACK! UNCONVENTIONAL WEDDING RINGS! etc.), this is about the type of spam that gets served up into your email, which is often spicier than the canned food item of dubious vintage and even more full of crap than the articles on Pocket.

I get hundreds of emails every day, and so, every couple of days, I have to look through my Spam folder to see if anything legitimate mistakenly got chucked into there, that I need to salvage.

Invariably there’s a legitimate press release or inquiry about a story for QuadCities.com, and I yank it out of the abyss, like Rick saving someone from the throng of dirty zombies.

But most of it is ridiculous crap.

I always enjoy seeing the aforementioned crap, especially if it’s bizarre or hilarious. And, of course, you never know what you might learn by looking at some of the information provided. Thankfully, you have me to provide it for you, to save you the effort.

I know, I know, surprising, right?

I mean, I’m not a hideous C.H.U.D., but I’m no Brad Pitt either. (Which is why I was able to date Shania Twain for so long, because that don’t impress her much, but I digress.)

Just ask Britny, or Jazmine, or Linda (Linda?), or the demure and lovely ladies from Sex Planet, who send me multiple messages a day, telling me that they’re the hottest girls, and ALL OF THEM, not just 83.7 percent, not even 95.9 percent, but ALL of the girls are looking for sex from me tonight.

But it’s not just Sex Planet, there’s also Tiger Girls, who I’m guessing are furries or maybe just regular naked girls who wear those cat ears? I’ll have to investigate. Hard news there.

There’s also x-X-X-X-x 18-plus, which tells me all the time about how much their girls want to have sex with me. I don’t know about them though, I’m not really into women with feet that big. 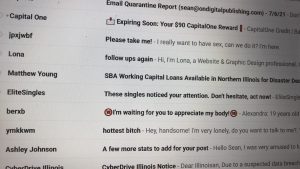 When she says she’s the hottest bitch, you’d better believe her, goddamn it.

of their naked bodies. And there’s berxb, who is 19, 160 tall and 2 chest size, who is waiting for me to appreciate her body.

Hey, no shaming here, I’m very body positive. So, I respect their freedom and desire to do so. But 160 feet tall is just going to be way too much for me.

Besides, they’re going to have to contend with ymkkwm, who says she’s the hottest bitch, and is very lonely and wants to talk to me and send me pictures of her naked boobs. As opposed to her boobs wearing a top hat and formal poncho. And I truly admire how polite jpxwffb is, as she titles her email, “Please can we have sex?” and offers, “I really want to have sex, can we please do it? I’m here.”

Manners and chivalry are not dead, people.

Man! With all these women wanting to have so much sex, I’m gonna have to get a bigger bed! Thankfully, Ashley furniture is offering them on sale in several other messages in my Spam folder! And I’ll be able to order as many beds as I like because Rajit Kumar, Jinesh Rai, and Jokit Ragmar are all offering me SECRET EXTRA STIMULUS PAYMENTS from the U.S. government that apparently only Indian gentlemen know about. Oh, you wily Joe Biden! For a robot body double secretly taking the place of the real Joe Biden, who was executed in tribunals along with Hillary Clinton and Tom Hanks by QAnon in the spring, while Donald Trump actually took over as the REAL president from a secret underground bunker sealed with aluminum foil, ya know, you’re not such a bad guy.

Thank God, I’ve had several people trying to get ahold of me via phone leaving me messages about that.