The YWCA Quad Cities is celebrating a surprise holiday gift this week.

It is among 384 charities throughout the United States that have received a donation from MacKenzie Scott, a 50-year-old American novelist, billionaire, and venture philanthropist. She has donated $4.1 billion to nonprofit organizations in all 50 states, Washington, D.C. and Puerto 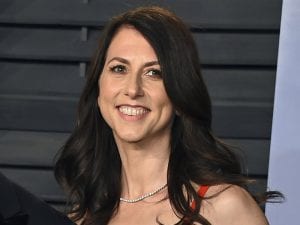 MacKenzie Scott (the third-richest woman in the world) has donated $4 billion to 384 organizations nationwide.

Rico, and the YWCA is just one of two recipients that serve the Quad-Cities – the other is Goodwill of the Heartland.

“These 384 carefully selected teams have dedicated their lives to helping others,” Scott explained in a Dec. 15 post on Medium, “working and volunteering and serving real people face-to-face at bedsides and tables, in prisons and courtrooms and classrooms, on streets and hospital wards and hotlines and frontlines of all types and sizes, day after day after day.

“They help by delivering vital services, and also through the profound encouragement felt each time a person is seen, valued, and trusted by another human being,” she wrote. Scott is the ex-wife of Amazon CEO Jeff Bezos.

She worked with a team of advisors to help her accelerate her 2020 philanthropic giving through “immediate support to people suffering the economic effects of the Covid-19 pandemic crisis,” according to a Thursday release from the Rock Island-based YWCA.

“Together with her team, Ms. Scott took a data-driven approach to identifying organizations with strong leadership teams and results. It is even more astounding that this gift was unsolicited and most definitely unexpected; however, it is certainly greatly needed,” the YWCA said.

“We have seen first-hand the negative impact the Covid-19 pandemic has had right here in the Quad-Cities community, and are excited to begin the process of allocating these funds to create bigger and better programming to serve those in need,” the release said. “There will always be a lot of work to be done; the generosity of Ms. Scott allows YWCA Quad Cities to be remain in the forefront with our efforts.”

YWCA Quad Cities has been a nonprofit in the Q-C community for more than 103 years, with a mission of eliminating racism and 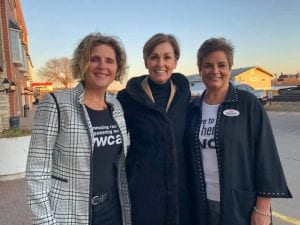 empowering women by regularly and intentionally standing up for social justice, and helping women, children and families to make for a stronger community.

“One of the biggest challenges that we deal with more often than not, is wanting to provide bigger and better programming, but not having the funds available to do it,” YWCA president/CEO Julie Larson said Thursday. “Well, today that changes!”

“It’s pretty exciting,” said Deanna Woodall, YWCA vice president of development and growth, who noted she could not reveal the grant amount. “It was a huge surprise. We had no idea. It was unsolicited, unexpected.”

“It’s important to note that the money is significant for our operation and programming,” she added. “It will allow us to do things we’ve always wanted t do, but weren’t able to do.”

YWCA Quad Cities has been quietly fundraising for its new facility capital campaign since receiving endorsement from the Quad Cities Contributors Council in November 2019, and recently announced it’s raised over half of the $9-million goal. The Scott donation will not be used for that campaign, but will definitely give it a boost, Woodall said.

“She focused really hard on organizations with strong leadership and that makes us really proud of ourselves,” Woodall said. “Hopefully, this will encourage other people to give, who maybe were thinking, ‘What is the future of the YWCA?’ The future is very bright.”

“We are beyond excited about the future of YWCA Quad Cities as we begin to see a dream become a reality,” Larson said of the new building plans in downtown Rock Island.

The capital campaign is to build a new $9-million Rock Island center at the old Zimmerman Honda site on 5th Avenue and 18th Street, two blocks from the YWCA current facility.

The former car dealership has been torn down and they plan to begin construction on a new 38,000-square-foot building in the spring, which will take a year to complete, Woodall said.

A comprehensive approach to the nation’s needs

In her divorce from Jeff Bezos last year, MacKenzie Scott received a 4% stake in Amazon – then valued at $37 billion. Amid the stock market’s pandemic boom, those shares would now be worth about $62 billion, though it’s not clear how much of the fortune she has sold. 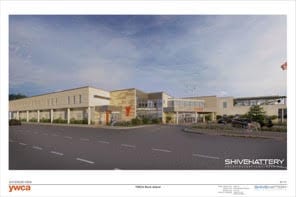 A rendering for the new $9-million Rock Island center, to begin construction this spring.

According to Forbes, Scott is the third-richest woman in the world, estimating her worth at $55.1 billion after her most recent donations.

In this week’s post, she wrote her aim was to support people suffering the economic effects of the Covid crisis. They took a data-driven approach to identifying organizations with strong leadership teams and results, with special attention to those operating in communities facing high projected food insecurity, high measures of racial inequity, high local poverty rates, and low access to philanthropic capital.

To select these 384 recipients, the team sought suggestions and perspective from hundreds of field experts, funders, and nonprofit leaders and volunteers with decades of experience, Scott wrote.

“We leveraged this collective knowledge base in a collaboration that included hundreds of emails and phone interviews, and thousands of pages of data analysis on community needs, program outcomes, and each non-profit’s capacity to absorb and make effective use of funding.”

They looked at 6,490 organizations, and undertook deeper research into 822. “We put 438 of these on hold for now due to insufficient evidence of impact, unproven management teams, or to allow for further inquiry about specific issues such as treatment of community members or employees,” Scott wrote.

The YWCA is over halfway to its fundraising goal for the new 38,000-square-foot facility.

“We won’t always learn about a concern inside an organization, but when we do, we’ll take extra time to evaluate. We’ll never eliminate every risk through our analysis, but we’ll eliminate many. Then we can select organizations to assist — and get out of their way.”

“We do this research and deeper diligence not only to identify organizations with high potential for impact, but also to pave the way for unsolicited and unexpected gifts given with full trust and no strings attached,” she wrote. “Because our research is data-driven and rigorous, our giving process can be human and soft. Not only are non-profits chronically underfunded, they are also chronically diverted from their work by fundraising, and by burdensome reporting requirements that donors often place on them.”

Of the recipients, many are filling basic needs: food banks, emergency relief funds, and support services for those most vulnerable. Others are addressing long-term systemic inequities that have been deepened by the crisis: debt relief, employment training, credit and financial services for under-resourced communities, education for historically marginalized and underserved people, civil rights advocacy groups, and legal defense funds that take on institutional discrimination, Scott said.

The board of Goodwill of the Heartland (one of 46 Goodwill affiliates helped nationwide) is meeting Thursday night, and would not have a statement on the donation until Friday. 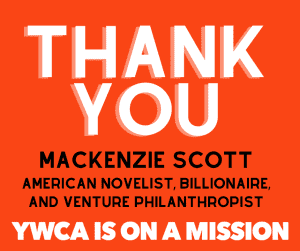 The YWCA celebrated its news Thursday on its Facebook page.

YWCA Quad Cities is among 60 YWCAs nationwide to receive funding; there are also 43 YMCAs, and 45 United Way chapters, but none of those are in the Q-C. Though 42 food banks nationwide affiliated with Feeding America are getting assistance. River Bend Food Bank was not on the list.

“This pandemic has been a wrecking ball in the lives of Americans already struggling,” Scott wrote in the post announcing the donations. “Economic losses and health outcomes alike have been worse for women, for people of color, and for people living in poverty. Meanwhile, it has substantially increased the wealth of billionaires.”

Melissa Berman, CEO of Rockefeller Philanthropy Advisors, told Bloomberg that Scott’s nearly $6 billion in donations this year “has to be one of the biggest annual distributions by a living individual” to working charities.

Scott signed the Giving Pledge last year, promising to give the majority of her wealth to philanthropy. Bezos, who has not signed the pledge, earlier this year committed $10 billion to fight climate change.

In July, Scott announced she had given away nearly $1.7 billion to a number of causes, including historically black colleges and universities and women’s and LGBTQ equity organizations. Howard University received $40 million, which it said was the largest gift from a single donor in the school’s history.

Chuck Collins, director of the Program on Inequality and the Common Good at the Institute for Policy Studies, wrote at CommonDreams that while Scott is a newcomer on the billionaire-giving scene, she is doing it better than others in her rarified group.

“She still has a long way to go in her stated intention of giving away all the wealth. But she’s now made two bold moves, putting to shame the other 650 U.S. billionaires who haven’t figured out comparable ways to boldly share,” he said.

“During a pandemic when US billionaire wealth has increased $1 trillion since March, other billionaires should draw inspiration from her approach to move funds to urgent needs, to historically marginalized groups, to share decision-making with non-wealthy people, and to avoid warehousing funds in private legacy foundations.”