Connie Corcoran Wilson March 26th, 2020 Things To Do, Reviews, Events, Entertainment, Articles Share:
Ted Hicks worked in film in NYC, was in charge of awarding the Christopher Award, and was a college friend of mine at the University of Iowa. Ted has put together a list of good things to stream while we’re all stuck at home social distancing, and I have added my own favorites and added some specifics to his list.
“A few days ago, Gary Davis, who I’ve known since 1st grade in Nemaha, Iowa, asked for some TV/cable/streaming recommendations,” Ted said. “I put together a bunch of titles and sent it to him.. I know many of you will already know a lot of these shows, but there might be some you haven’t seen.” 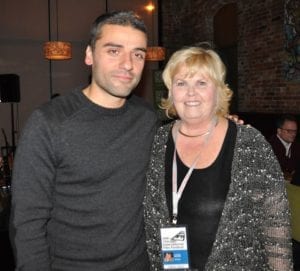 I have made additions to Ted’s original list, adding some old favorites and some new, and including  names of the actors/actresses involved, when relevant and not a chore to research. Therefore, it is now a composite list from two dedicated film-goers.  I have been reviewing film uninterruptedly since 1970 and review film for www.TheMovieBlog.com, www.WeeklyWilson.com and, sometimes, www.QuadCities.com. I’m also the author of “It Came from the 70s: From The Godfather to Apocalypse Now,” which has not only a look at the sci-fi and horror flicks and major films of that time period, but 10 trivia questions per film with the answers upside-down, to pique your curiosity.
A Million Little Things – Ron Livingston (“Sex & the City”), David Giuntoli (“Grimm”), James Roday (“Psych”), Josh Ritter, and others are a close-knit group of friends who are affected by the suicide of one of the group. (rentable on Amazon Prime) 2 seasons.
Better Call Saul – prequel to Breaking Bad, 1st four seasons on Amazon Prime, 5th season currently on AMC.
Bosch – 5 seasons (Amazone Prime) – great series about an LAPD homicide cop, based on a long-running series of novels by Michael Connelly. The 6th season debuts sometime next month, I think.
Comedians in Cars Getting Coffee – terrific Jerry Seinfeld series, all seasons are now on Netflix. We’ve seen most of them. The episode with Eddie Murphy is one of my favorites.
Country Music – Ken Burns series on PBS. Not sure if this can be streamed yet..
Criminal: UK, French, German, Spanish – Gripping series on Amazon, four separate “seasons” all taking place inside police interrogation rooms in the respective countries.
The Crown – 3 seasons on Netflix.
Curb Your Enthusiasm – Larry David and Jeff Garland in a show largely about their lives.
Gentleman Jack –  new show from last year, on HBO.
Giri/Haji (Netflix) – Japanese cops & gangsters, British cops & gangsters in a storyline that combines them all. Very violent but also very well made. I liked it.
Glow – 3 seasons (Netflix) Marc Maron organizes the Glorious Ladies of Wrestling.
Goliath – 3 seasons (Amazon Prime) – Billy Bob Thornton as an unorthodox lawyer in Los Angeles. Excellent. Was not renewed.
Good Girls – 2 seasons, AMC Christina Hendricks from “MadMen” involved in a variety of criminal enterprises with her sister and a friend.
Grantchester – 4 seasons on PBS Masterpiece Theater.
Hinterland – 3 seasons on Netflix, cop show set in Wales. Dark, tragic storylines. It’s excellent.
Killing Eve – First 2 seasons on Amazon Prime (3rd season coming up on BBC America).
Life in Pieces – ensemble cast with James Brolin, Dianne Weist, Colin Hanks, Betsy Brandt (“Breaking Bad”) and Thomas Sadowski and others. Canceled for next year. On Amazon Prime from 2015-2019.
Nurse Jackie – Edie Falco (‘The Sopranos”) is a drug-addicted nurse. (Showtime) 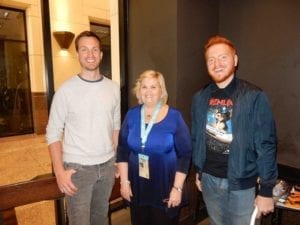 My Brilliant Friend – 2nd season started this past Monday on HBO.
The Plot Against America – David Simon series based on Philip Roth novel, also began on Monday. Elements of “what if” Lucky Lindy, the aviator, were to have been presented as a presidential candidate.
Haunt – Scott Beck and Bryan Woods (left, with me at SXSW), the local filmmakers who shot to fame with “A Quiet Place,” make their directorial debut for a major studio in this shocker.
Secret City – 2 seasons on Netflix – political thriller set in Australia.
Schitt’s Creek – broad gay-friendly comedy from Eugene Levy and his son Dan, with SCTV’s Catherine O’Hara and Chris Elliott. Going off the air soon. On since 2015.
The Sinner – seasons 1 & 2 on Netflix, 3rd season now airing on USA. We just started this series this year and burned through first 2 seasons, loved it. (Bill Pullman)
The Stranger (Netflix) – very good thriller.
Trapped – 2 seasons on Amazon Prime –  cop show set in Iceland.
Unbelievable – Netflix mini-series. This is excellent! Young rape victim’s story isn’t believed, then two female detectives in Colorado get involved. Kaitlyn Dever (“Them That Follow”) who was just inducted into the Texas Film Hall of Fame is the protagonist and Merritt Weaver (“Nurse Jackie”) is one of the investigators 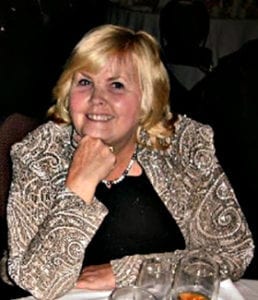 Unforgotten – 3 seasons on PBS (available on Amazon Prime). Cop unit in the UK finds old cases thought to have been solved, but new evidence reveals truth yet to come out. The great Nicola Walker (Last Tango in Halifax) is head of the unit.
The Valhalla Murders (Netflix) – more cops in Iceland.
Vera – 10 seasons on Amazon Prime/BritBox. Another cop show, with Brenda Blethyn as the prickly head of a team in Halifax (UK).  Each season is 4 episodes approximately 90 minutes each.
Westworld – elaborate theme park setting initially. Futuristic. HBO.
What We Do in the Shadows – FX series, 1st season on Amazon Prime, 2nd season starts on FX in April.  A small group of vampires share a house on Staten Island. Very black, dead-pan comedy. This premiered at SXSW last year (2019).
Advertisement
Connie Corcoran Wilson
Connie (Corcoran) Wilson (www.ConnieCWilson.com) was the Quad City Times film and book critic for 15 years and has continued reviewing film uninterruptedly since 1970. She also publishes books (31 at last count) in a variety of genres (www.quadcitieslearning.com), has taught writing or literature classes at every Quad City college or university as adjunct faculty, was Yahoo's Content Producer of the Year for Politics  and writes on a variety of topics at her own blog, www.WeeklyWilson.com.
See More Articles From Connie Corcoran Wilson
Tagged: Bryan WoodsConnie Corcoran Wilsonmovies to watchScott Beckted hicksthings to watch while quarantinedtv to watch