Quad-Cities stores are far from flush with toilet paper.

With new covid-19 restrictions in place for the Iowa and Illinois Quad-Cities, toilet paper is flying off the shelves again in local stores, although other staple food and supply items seem to be remaining stable on shelves.

A visit to six area locations — two Targets, a Walmart, a Sam’s Club, and two HyVee stores — showed that shelves are barren in some, but still in ok shape in others.

Iowa side stores seem to be in more of a frenzy, given Governor Kim Reynolds’ proclamations and immediate restrictions put in place yesterday. The Iowa-side Target and Sam’s Club shelves are pretty much entirely devoid of toilet paper and are becoming short on paper towels and other products, as of yesterday evening.

On the Illinois side, where Governor JB Pritzker has announced Friday as a date for a regression to Tier 3 mitigation circumstances, there are obviously some signs of people beginning to pick up more TP, but the shelves aren’t as devoid as those in Iowa. Moline HyVee and Target are at least 40 percent stocked, with Rock Island HyVee over 50 percent stocked. 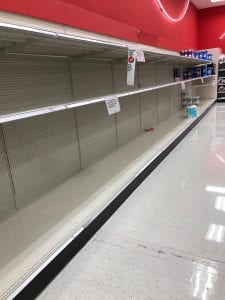 The shelves of Iowa’s SuperTarget are nearly bare of all toilet paper, in the wake of Kim Reynolds’ announcement of new Iowa restrictions kicking in Tuesday.

Both Target stores in the area, in Davenport and Moline, have put up signs limiting customers to only one package of toilet paper per purchase, a throwback to the same limitations imposed in March and April during the first part of the pandemic surge.

The Quad-Cities is hardly alone.

USA Today recently ran an article on the growing trend of people starting to prepare for another potential shutdown. Over half of Americans said they’re already stockpiling food and toilet paper again in preparation for the fall covid surge, according to a recent poll from Sports and Leisure Research Group, Engagious and ROKK Solutions.

Business Insider just ran another story on where people could buy toilet paper online. And online shopping site Instacart reported an almost 20 percent surge in online searches for toilet paper in the past two weeks.

Employees at the stores spoke on condition of anonymity, and had mixed opinions.

“We started to notice that people were starting to buy a lot more again, so that’s why I think we did it,” one Target employee said. “I noticed we started to get more people buying it in the last couple weeks, but it’s nothing like it was in the spring.”

At SuperTarget in Davenport, however, it was a different story.

“Same thing as in spring, once (Governor Reynolds) said she was shutting things down, people started to come out and buy up everything on the shelves,” an employee said. “It’s nuts.”

However, on the Illinois side, it was somewhat more tame. 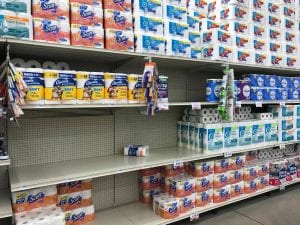 HyVee in Moline was mostly well-stocked, although a few brands were off the shelves.

“Yeah, we’re starting to see more people start to buy more again, now that the covid is coming back,” one WalMart employee said. The store in Moline was still adequately stocked, but you could definitely see there were gaps in the stacks, showing there had been a lot of purchases.

At HyVee in Moline, it was also a mixed bag, as some brand names were in short supply, but overall they were well stocked in regard to off-brand toilet paper.

“We haven’t really seen it much yet, nothing like it was in the spring,” a HyVee employee said. “I guess some brands you’re starting to see there’s less on the shelves, but that’s about it.”

Other items which were subject to shortages in the spring haven’t seemed to have been hit by the same increasing demand. Canned goods and frozen items are still in full supply on the shelves, soaps of all types and cleaning products are likewise showing no shortages, and hand sanitizer — which was as highly in demand as toilet paper at the onset of the surge in March — is very well stocked, with all of the stores visited having multiple brands and options stocked up on multiple shelves.

The Quad-Cities has exploded into the top 10 worst covid outbreak spots in the nation, according to data from the CDC, the New York Times reported. According to the data, the Illinois/Iowa Quad-Cities is now inside the top ten most rapidly spiking hot spots nationwide for the second consecutive week, roaring from number 13 to number 7 to number 6 in just two weeks.

Illinois and Iowa hold 12 of the top 15 spots in the country, with Cedar Rapids holding at number one.

Iowa’s state positivity rate has gone over 50 percent this week, hitting 50.7 percent for the time period of Nov. 8-14, according to John’s Hopkins University statistics.

For more ongoing coverage of covid-related news, continue to check QuadCities.com. We will continue to provide free news updates as a public service to our community.

Sean Leary
Sean Leary is an author, director, artist, musician, producer and entrepreneur who has been writing professionally since debuting at age 11 in the pages of the Comics Buyers Guide. An honors graduate of the University of Southern California masters program, he has written over 50 books including the best-sellers The Arimathean, Every Number is Lucky to Someone and We Are All Characters.
See More Articles From Sean Leary
Tagged: Chicagocovid-19East MolineIllinoisillinois quad-citiesiowa quad-citiesJB Pritzkerlori lightfootMolineRock Islandshortagesstockpilingtoilet papertp